Micromax is among the most successful Indian mobile manufacturers. So much, in fact, that they created a tease campaign for their newest phone, the Micromax Canvas 4. It was announced that even before the reveal, pre orders were being accepted. No specs, price or details were mentioned at that point of time, so it was pretty much a leap of faith. There were wild rumors that this particular phone would have the specs to go toe to toe with the biggies like Samsung Galaxy S4 and HTC One, but today’s reveal proves that they were just rumors. Read on for more about the Micromax Canvas 4 launch! 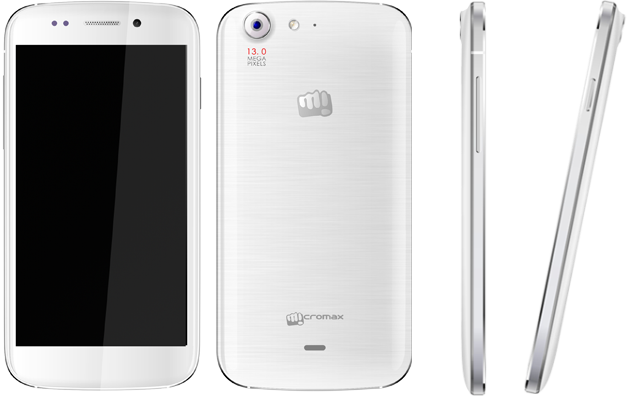 First off, if you expected a spec monster, you’re out of luck. There’s no full HD screen, 2 GB of RAM or octa core processor as rumored either. In fact, the Canvas 4 is more of an evolution of the Canvas HD A116. It’s the same SoC, screen and such, with better cameras. Here’s the full spec sheet:

So how exactly is it different from its predecessor? There’s a couple of ways its better. The body is now encased in an aluminum strip like the Galaxy S4, and the polycarbonate shell is of a better quality. Cameras have been bumped up to 13 MP and 5 MP units on the rear and front respectively. It’s probably the biggest hardware change of the lot, but it remains to be seen if they’re as good as claimed.

A lot of features have been borrowed from other phones, such as videos pausing when you look away, flip to silence and the ability to pin videos and watch then on the homescreen while doing other tasks. An original but gimmicky feature being introduced is “Blow to unlock”, where you can actually blow a kiss to unlock the phone. Ridiculousness apart, you can get all this for Rs. 17,999 which isn’t half bad, but considering all the hype and fanfare we expected a lot more. Perhaps the Canvas 5 will be all that? Drop us a line with what you think about the new Canvas 4!