Symantec and Norton are probably the first names that come to your mind when you’re thinking about computer security. It’s not a surprise, since they have been at the forefront of the war against malware for years. Speaking on those lines, Symantec has released a brand new version of its most complete security suite, Norton 360. So how does version 6 of Norton’s flagship product fare? Read our Norton 360 v6 review to find out! 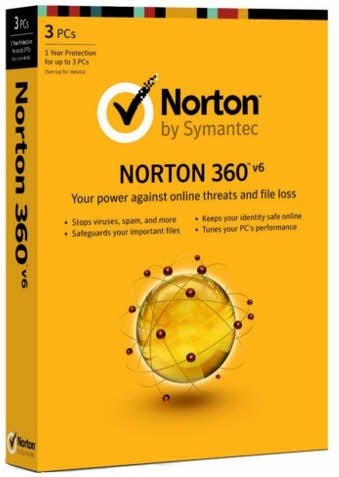 The “360” tag here is a reference to the all round protection offered by this suite. Fortunately, what you see is what you get here. Norton 360 includes an antivirus, a firewall, antispam, parental controls, online & local backup, identity protection and PC tuneup all in one package. Just a few years ago, Norton products had become, for the lack of a better word, bloatware. It slowed down your computer, left a large footprint and was sometimes notoriously difficult to uninstall. But those days are long gone, Norton’s new products have undergone a significant makeover and are now much more efficient and user friendly.

Along with the makeover came a new installer that promised installs under a minute. It does stay true to this and installs remain under a minute and at worst stretch upto 90 seconds, which isn’t really bad either. Norton 360 v6 takes installers one step further and features a smart “self healing” installer.  This is because there are a lot of malware that interfere with software installations and may not allow you to install security software. Norton’s new installer runs a check and attempts to remove malware. Most of the times it is able to remove the threat and continue with installation. In the case it is not able to remove the interfering malware, the installer attempts to connect to the internet and obtain a script to remove it. For people who have an infected PC and want to install security software, this is a very good feature indeed. 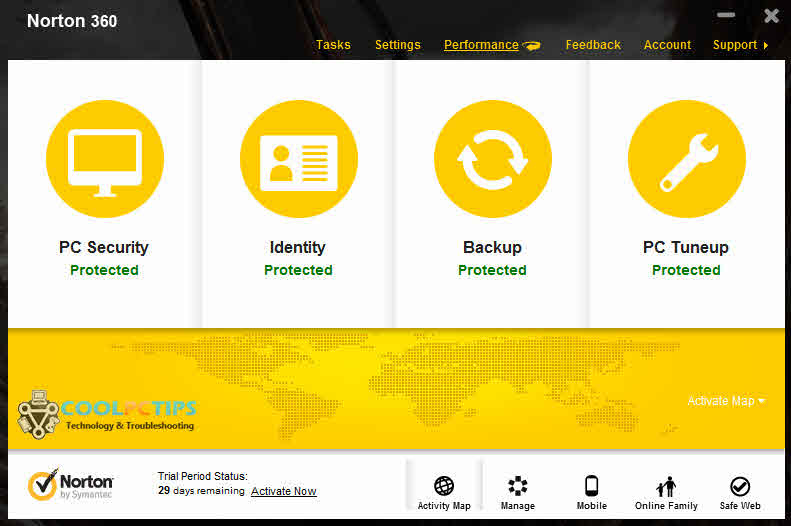 Norton 360 does a good job of detecting threats and scores a 90% detection rate. Once detected, the removal rate of most malware is excellent and is 100% for some types. Sometimes Norton 360 gets a bit overenthusiastic and quarantines or removes safe files, but the occurrence is rare. But then again, it’s only for protection sake and you can just restore the file with a few clicks. The heuristics engine and Norton Insight network work in tandem to ensure all malware is kept at bay. Even newer threats are quickly recognized and you remain safe. More on the Norton Insight network later.

The firewall included in Norton 360 v6 is one of the best firewalls in security software. It quickly and effectively blocks out unwanted remote access, hacking attempts and rogue programs. Moreover, it shields the computer and masks ports. In the case of program access, Norton takes all decisions by itself and identifies good programs from the bad effectively. Again, filtering is based on behavioral scanning and the Norton Insight network so you won’t have problems with Norton 360 blocking games or other safe programs. All intrusion attempts are silently blocked and the user remains undisturbed. However, the log shows every action Norton has taken. 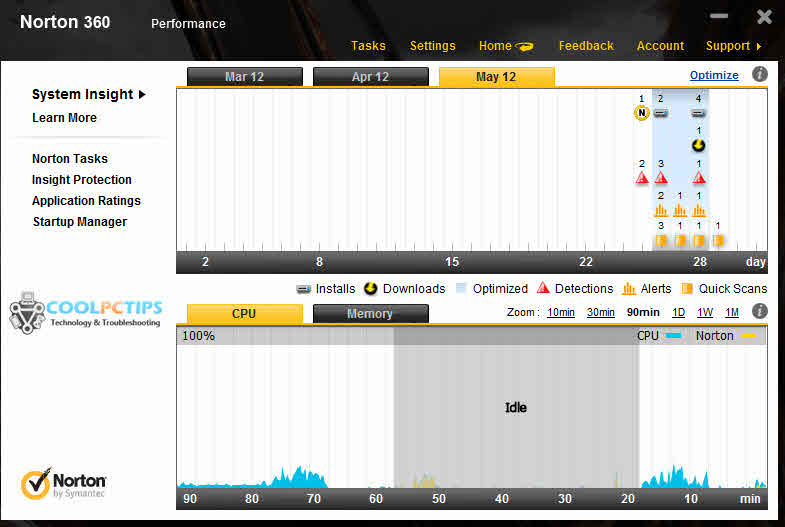 Norton 360’s anti-spam integrates well with Microsoft Outlook, but if you use a third party client like Thunderbird or Incredimail you have to tweak the settings a bit for the filtering to take place. In general the anti-spam works well and filters about 97% of spam and hardly tags valid mail as spam. Now, parental controls included is the basic edition. The premier edition comes for an extra 49.95$. All basic features such as IM filtering, search filtering, website blocking and time limited internet usage are included. However, if you really need parental controls, the premier edition is well worth the cost. For the extra 50 bucks, you get complete usage logs for 3 months, application monitoring and even a log of videos watched. Also included is mobile parental control for Android devices. For the record, the basic edition included logs computer usage for a week.

There is no dearth of erroneous websites looking to steal your passwords, credit card and bank account details. Norton ‘360’s anti-phishing is a good ally to have if you frequently make internet transactions. Employing the usual blocking from a database of known fraud sites as well as a code inspector to identify phishing websites, rest assured the anti-phishing here will keep you safe. Norton 360 also includes Identity Safe, which can automatically save your sensitive credentials in it’s servers so when you login to a secure website, all details can be entered by Norton Identity Safe. However, all your credentials are protected by a master password, so make sure that password is strong and not known to anyone else.

Included in Norton 360 is the backup feature. It allows you to backup important files easily onto any removable media and offers 2GB of online storage as well. The online files can be accessed from anywhere too. Once you’ve set up the backup, Norton will automatically update if any files are changed, and only the changed files are updated. Also included is a PC tuneup feature that carries out a few tasks to keep your computer healthy. These include disk defragmentation, temporary file cleanup, registry cleanup and a startup manager to minimize boot time. A diagnostic tool keeps track of common problems and suggests then carries out solutions as well. A full scan can be run which carries out all tuneup operations at once and these tasks can be scheduled as well. It’s a good one click cleanup for the common user, but lacks advanced options like dedicated cleanup/tuneup programs. 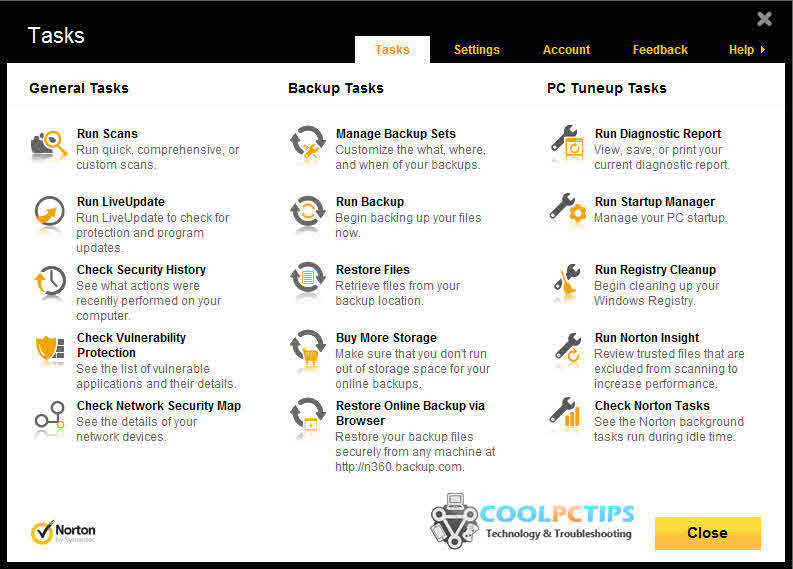 When you first install a Norton product, it prompts whether you want to join the Norton Insight network. Be sure to tick this option because it really helps out all Norton users. The Norton Insight network basically collects information from millions of computers  all over the world to maintain a database and identify fraudulent websites, unsafe programs/files and everything related. This is how Norton knows what files and programs to block and what not to. The firewall thus understands if a program is used widely and tags it as safe. Same applies for programs. However, sometimes, a brand new file even from a trusted source can be tagged as unsafe or will ask for confirmation before running. Using all this information, you can view ratings of programs and files in your computer that includes a stability rating. A nice touch, we say. 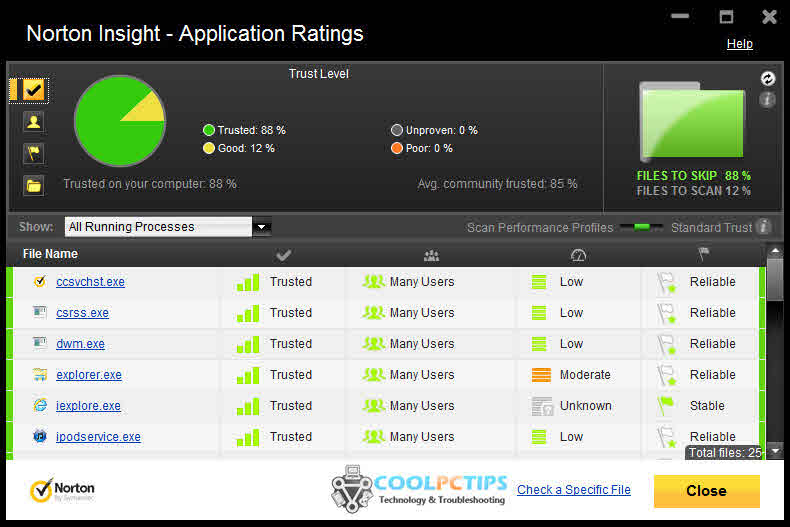 Norton 360 is light on resources and hardly impacts PC performance. It uses under 120Mb of disk space and adds about 7 seconds or so to boot time. Scans are fairly quick and of course depend on disk size and data stored. Even when scans are running there are no significant slowdowns, but if defragmentation is running expect some slowdown. Since Norton 360 scans pretty much everything, opening folders, copying files and other common operations might take half second or so more, but nothing particularly noticeable.

Overall, Norton 360 v6 is a great buy if you’re looking for an all in one package. With excellent security features, useful addons and a user friendly interface, Norton 360 v6 is our pick for security software among those currently available. Do let us know what you thought of our Norton 360 v6 review!