Razer is well known for making high end gaming hardware. It’s one of the few companies that also makes a gaming oriented laptop. Laptops specially meant for gaming are rather rare because it’s difficult to pack in enough of processing power to run all modern games at their highest details in a small form factor. That hasn’t deterred many companies from trying though. Most gaming laptops tend to be rather heavy and thick, it’s quite difficult to carry them around. The Razer Blade range of gaming laptops is different in that regard, they’re the first truly portable and thin gaming laptops. At PAX 2012, Razer announced the 2nd generation of their Razer Blade gaming laptop which comes with significantly more powerful specs and is still cheaper! The specs are everything you could ever want, and Razer is going to utilize the latest Intel Ivy Bride Core i7 processors for the best performance. That’s not all, there’s a lot of unique features as well, but let’s have a look at the hardware of the Razer Blade first. 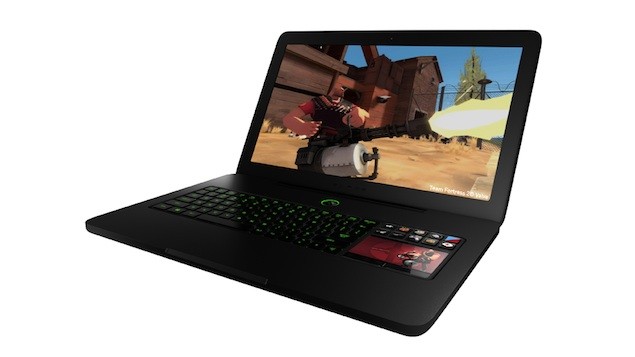 Phew, that’s more power than you can shake a stick at. Even though all of this stuff is packed in, the laptop is extremely portable and is just 0.88 inches thick and weighs only 3 kg. Of course, heat dissipation is a major concern with powerful laptops and Razer admits, although it will get hot, you won’t have to take any extra measures and it won’t cause any harm or crash after extended usage. Razer has incorporated new cooling system which keeps this monster’s temperatures under control. As of now the processors that will be used haven’t been mentioned, but we can surely expect the latest and greatest running on the Intel HM77 chipset. The graphics are formidable as well and use Nvidia’s Optimus technology to use the appropriate GPU according to the task at hand for the best power efficiency. Storage is an interesting feature here, with Razer providing an SSD as well for the first time with proprietary technology that loads the most commonly accessed files to it for the best performance. If you’re wondering why Windows 7, the Razer Blade will be available for purchase before the Windows 8 launch date, so it can’t come built in with it. however, it will be eligible to be upgraded to Windows 8 Pro through the Windows 8 upgrade offer. 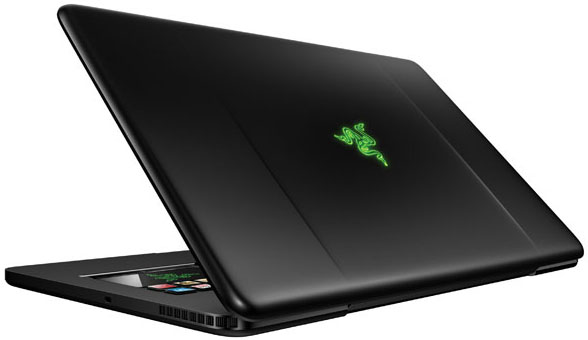 That’s not all, the Razer Blade has got more tricks up it’s sleeve! Anti Ghosting backlit and macro enabled keyboard aside, the Razer Blade’s multi-touch trackpad also doubles up as a miniature LCD screen when an external mouse is plugged in! You can play a video, or add extra information from the game to display on the LCD to give you that extra edge. Above the trackpad-cum-LCD are 10 programmable buttons which can be used to perform specialized functions within games. Moreover, the LCD can also be used to navigate through Razer’s Switchblade UI which comes built in with programs designed to help in popular games like Battlefield 3, Star Wars: The Old Republic and the like. There’s also little apps included for social media. You can check out more about the Switchblade UI here.

So, the Razer Blade looks like a great laptop for gamers and is extremely light and portable a la the MacBook Pro. Keep in mind though, there’s no optical drive included. Despite all these upgrades, the new 2nd generation Razer Blade will retail for $2499, lower than the previous generation launch price of $2799. It’s expected to ship by the end of the month. Pre-orders are open now! Do let us know what you think of the Razer Blade, is it worth the price?