The new Tomb Raider reboot by Square Enix has to live up to a very illustrious legacy. After all, recreating and re imagining one of the most loved characters in gaming wasn’t going to be easy. After the well received initial showing in 2010, fans from all over the globe eagerly awaited the return of the most recognized heroine in gaming, Lara Croft. While the previous games were well received, nothing quite captured the magic of the original. This reboot explores Lara’s origins and shows how she became the badass explorer we know her to be. So read on for our full Tomb Raider PC review!

The story begins when Lara is shipwrecked, separated from her crew and going through things she never thought she could survive. She finds herself in life threatening situations, battling both nature and man to survive. As part of a crew to discover the mythical island of Yamatai, Lara quickly discovers that the island holds sinister secrets and they aren’t as alone as they thought they were. The island is a fantastic creation, and all due credit to the developers who made it possible. With extremely varied and fantastic environments, you never get bored of being at one place. 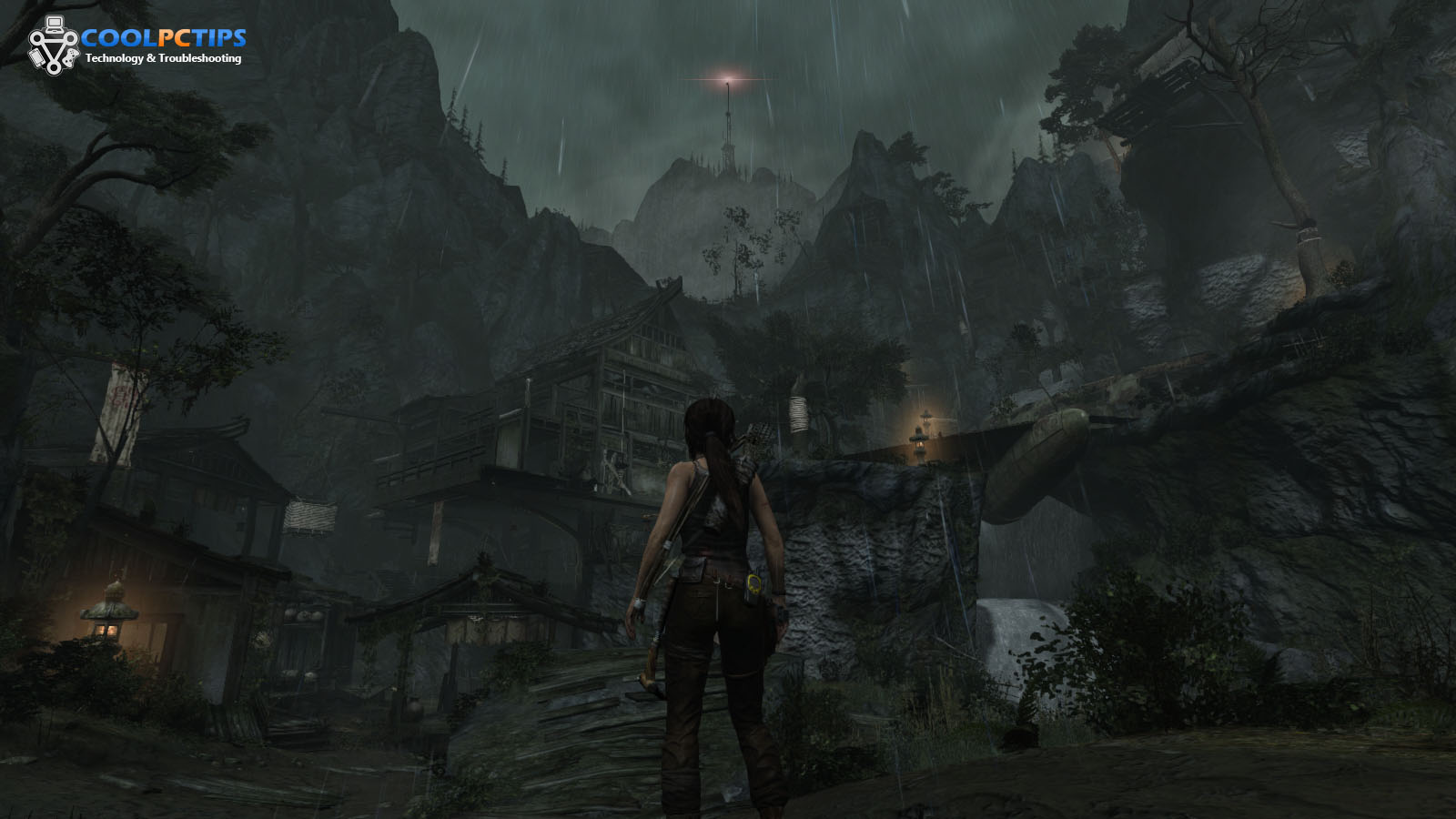 What really strikes a chord is how we see Lara go from a fearful academic to an intrepid and fearless survivor, braving situations and circumstances that would break any man, or woman. It’s a very believable transition and you feel really involved in how Lara grows as a character. By the end of the game, you get the feeling that she has changed completely, and the physical and mental strain throughout her ordeal has really sculpted her into a different person. Not to take anything away from the older games, but Lara was not quite fleshed out as a character as she is here. Gone are the um….impossible body proportions and lack of emotions, Lara is now a very believable heroine, perhaps exactly what she was initially thought out to be.

Tomb Raider is completely different from the previous games not only because it’s a reboot, but also because it’s decidedly more gritty and violent. Developers haven’t shied away from the blood, gore and language to describe Lara’s ordeal and this is the first game in the series to be rated 18+ or M for Mature. Specially in the beginning when Lara is pushed and put in situations where she has to do things she never did, the attention to detail is fantastic. At a certain point, when Lara is being manhandled, she kills the attacker and doesn’t believe what she just did. Over the course of the game you will encounter a lot of quick time events, and failing to complete them will often result in grisly deaths. So it’s better to keep the kids away! 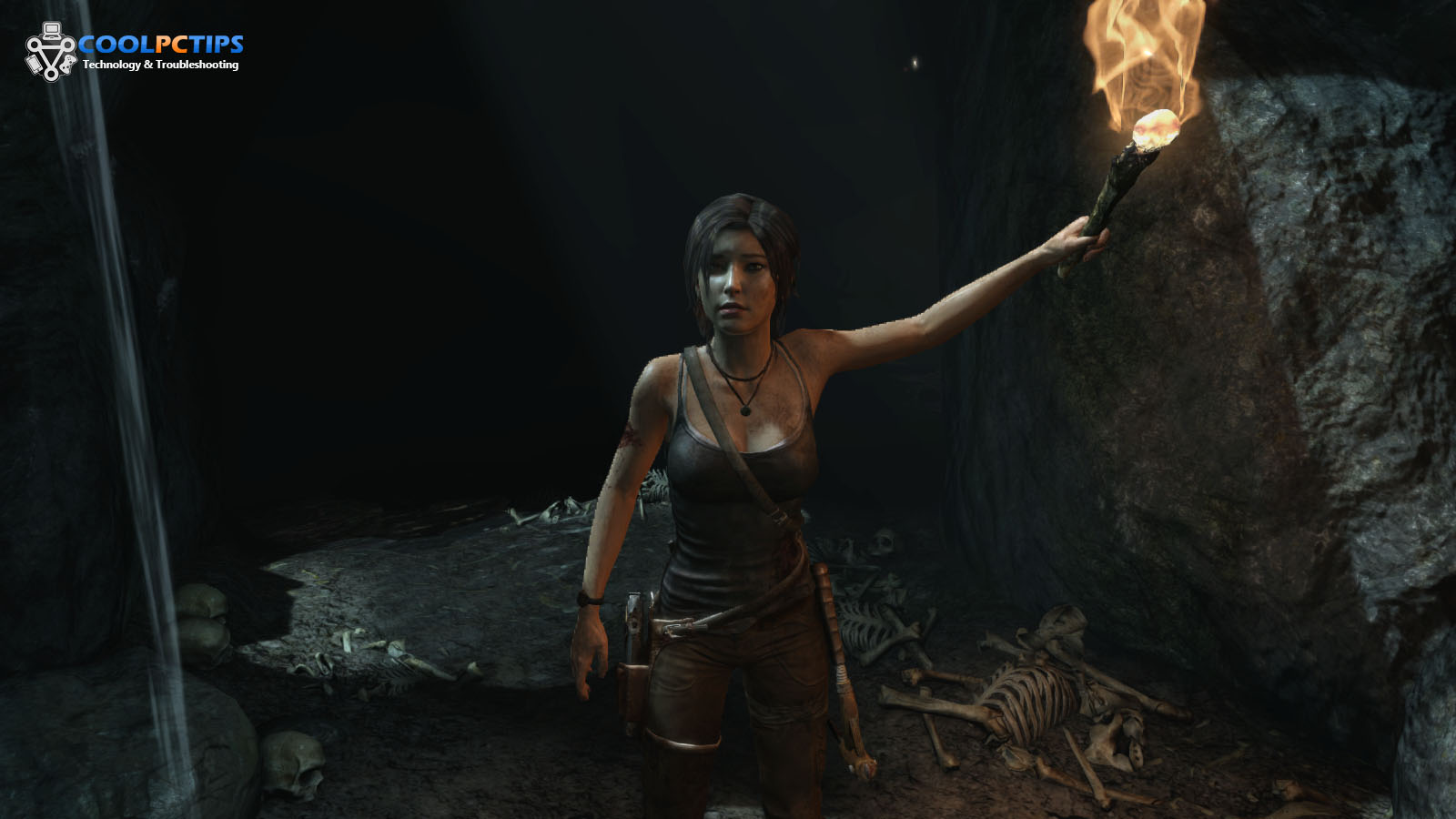 Although it’s named Tomb Raider, there’s not much tomb raiding as such. It’s mostly the journey of how Lara becomes who she is, and although there’s a healthy dose of platforming, it’s different from the previous games. Speaking of which, combat was something of an afterthought in the previous games, but in this one you will find that there’s quite a lot of combat and you really have to make an effort to get through them. Combat is much more varied and detailed, and Lara can use a multitude of weapons. A cover based system of combat has been implemented and during large fights, you cannot stay alive unless you keep moving, dodging and taking cover. There’s some RPG elements involved too, and salvaging from crates, boxed and corpses around the island nets you points that you can use to upgrade weapons and tools. Similarly Lara also gains skill points that can be put into either combat based or survival based perks. 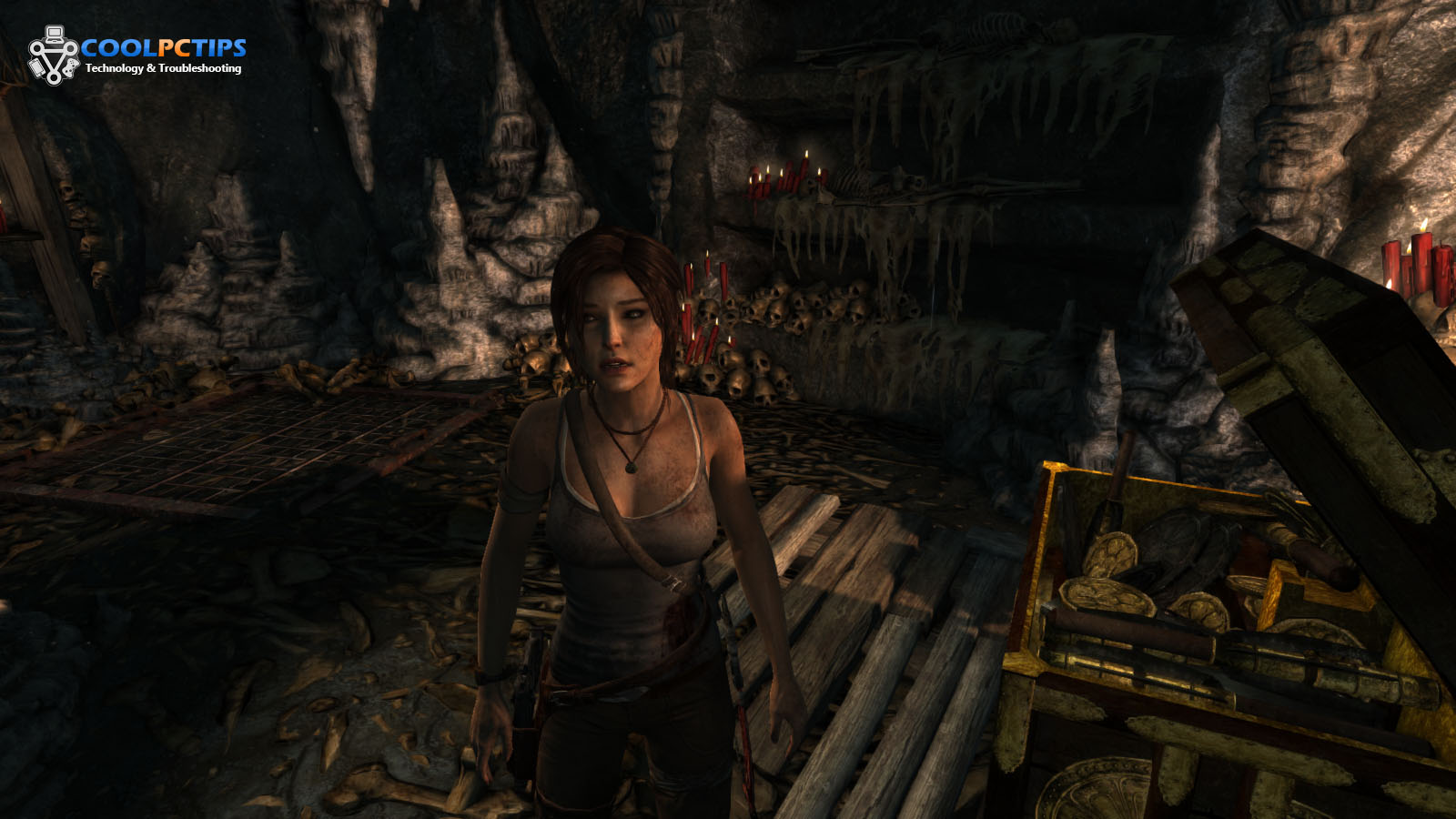 There’s a lot of quick time events in the game and if you’re not too quick on the trigger, they can prove to be quite cumbersome. The number of quick time events included might be a little bit on the higher side and might annoy some players. The tombs, however are great instances where the classic Tomb Raider traits shine. Platforming and puzzles are all incorporated here, and while they’re not extremely challenging, you won’t find yourself breezing through them either. For achievement fanatics there are quite a lot of collectibles too, and getting all of them reveal more of the islands tumultuous past.

The story clocks in at a solid 12+ hours and for people who obsess over discovering the littlest things, it can take even longer. Multiplayer, however, is lackluster and the game modes aren’t going to make you spend much time on them either. It’s mostly deathmatch and goal based maps which fail to invoke any of the magic in the single player campaign or any enjoyable multiplayer game. Not that we’re complaining though, it’s primarily a single player game and that’s what it should be seen as. 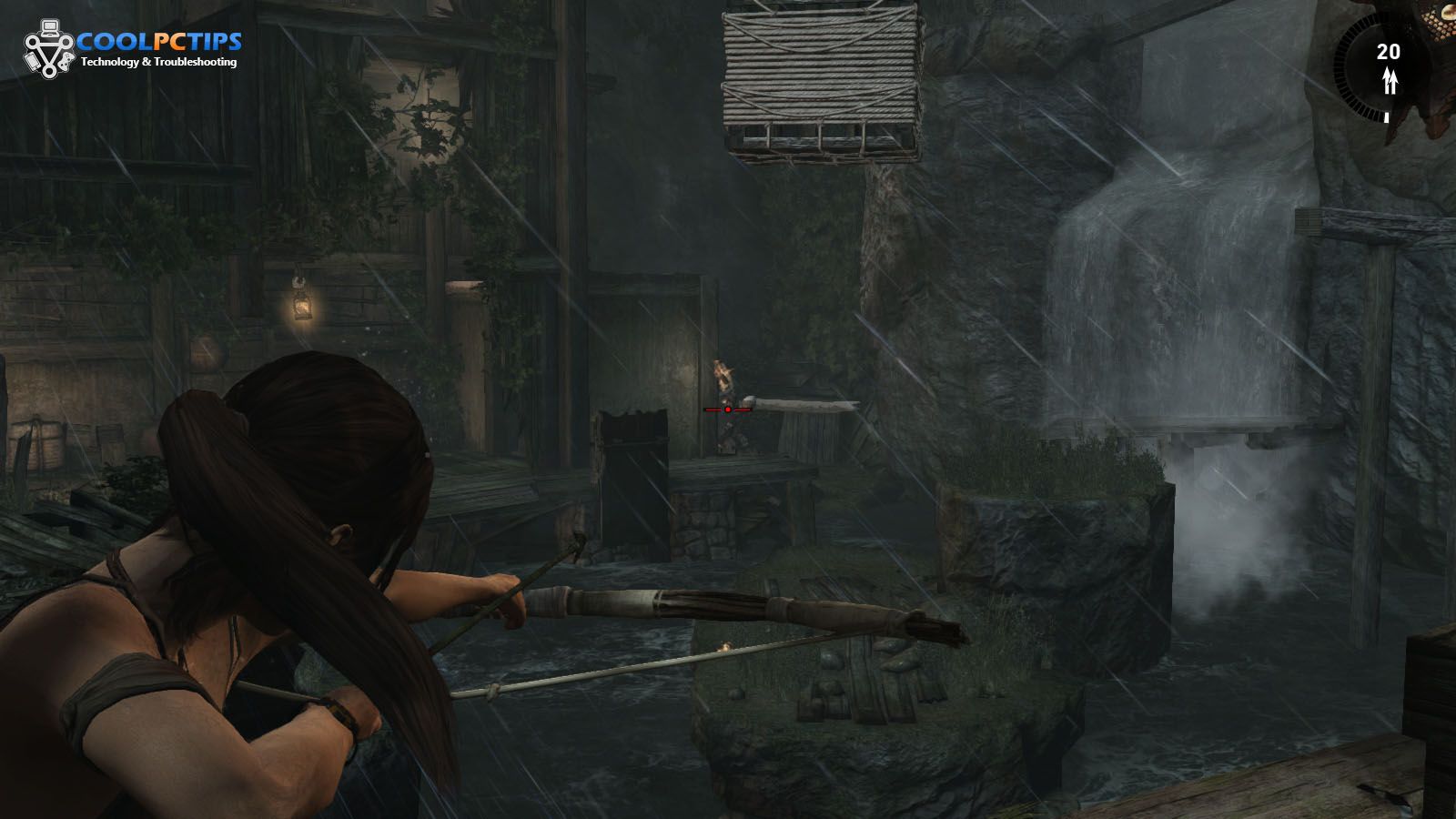 Let me be perfectly clear, Tomb Raider is a gorgeous game. No matter where you are, you will always be impressed by how amazing the game world and Lara look. There is no dearth of different environments, and every single place, be it a rainy village, a frozen mountaintop or a hot jungle looks fantastic. The credit goes both to the technical and artistic departments of the game who’ve really brought the island and its nuances to life. Subtle touches like a slight mist, sparks from a fire or raindrops really immerse you in the world. Lara herself is superbly animated, the motion capture really shows and during close up shots you can see how her expressions change. 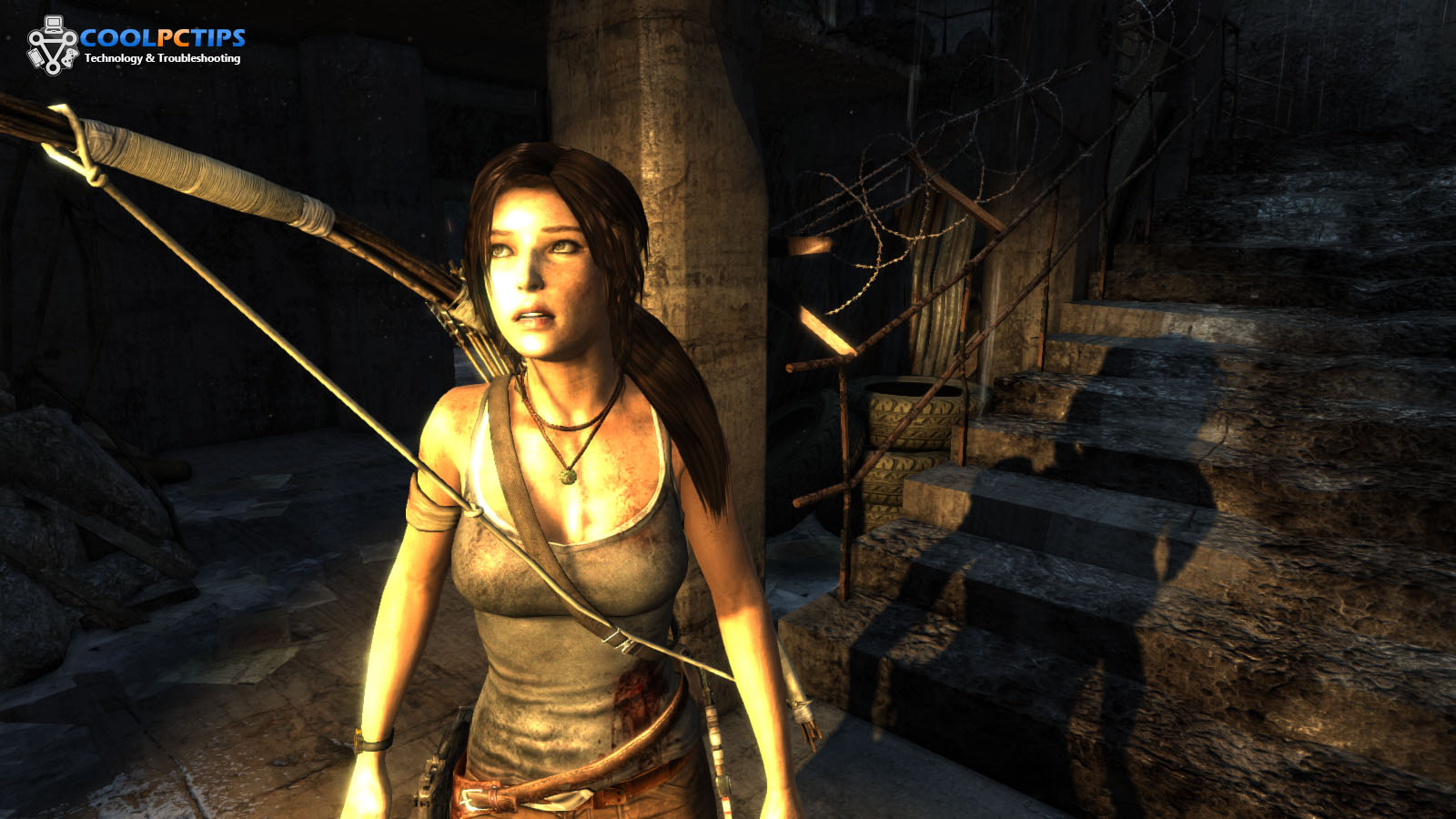 The best part is how well characters interact with the world, specially Lara. When she’s going through a dark cave you can see proper light distribution and shadows, when she’s on a narrow ledge she automatically grips the nearby wall and her expression changes to show focus, every single animation is fluid and natural. Considering the fact that there’s a lot of movement involved, with it being an action-platformer, that’s no mean feat. There’s a wonderful sense of connection and you don’t get the feeling that Lara and the world are separate entities. Do click on the screenshots to see higher resolution versions where the detail is really visible.

The same can be said for the sound, which is top notch. The soundtrack really adds to the atmosphere and never seems to overpower the presentation. Voice acting is another strong suit of the game. Although the secondary characters are sort of wooden and one dimensional, the voice acting is great. Now only if the dialogues were better. The strong graphics and sound is apparent in the initial stages of the game where Lara is really pushed to her limits and unless it’s presented well, the whole idea is lost. Thankfully though, that’s not the case and the grandiose scale of Lara’s adventure is adequately portrayed. 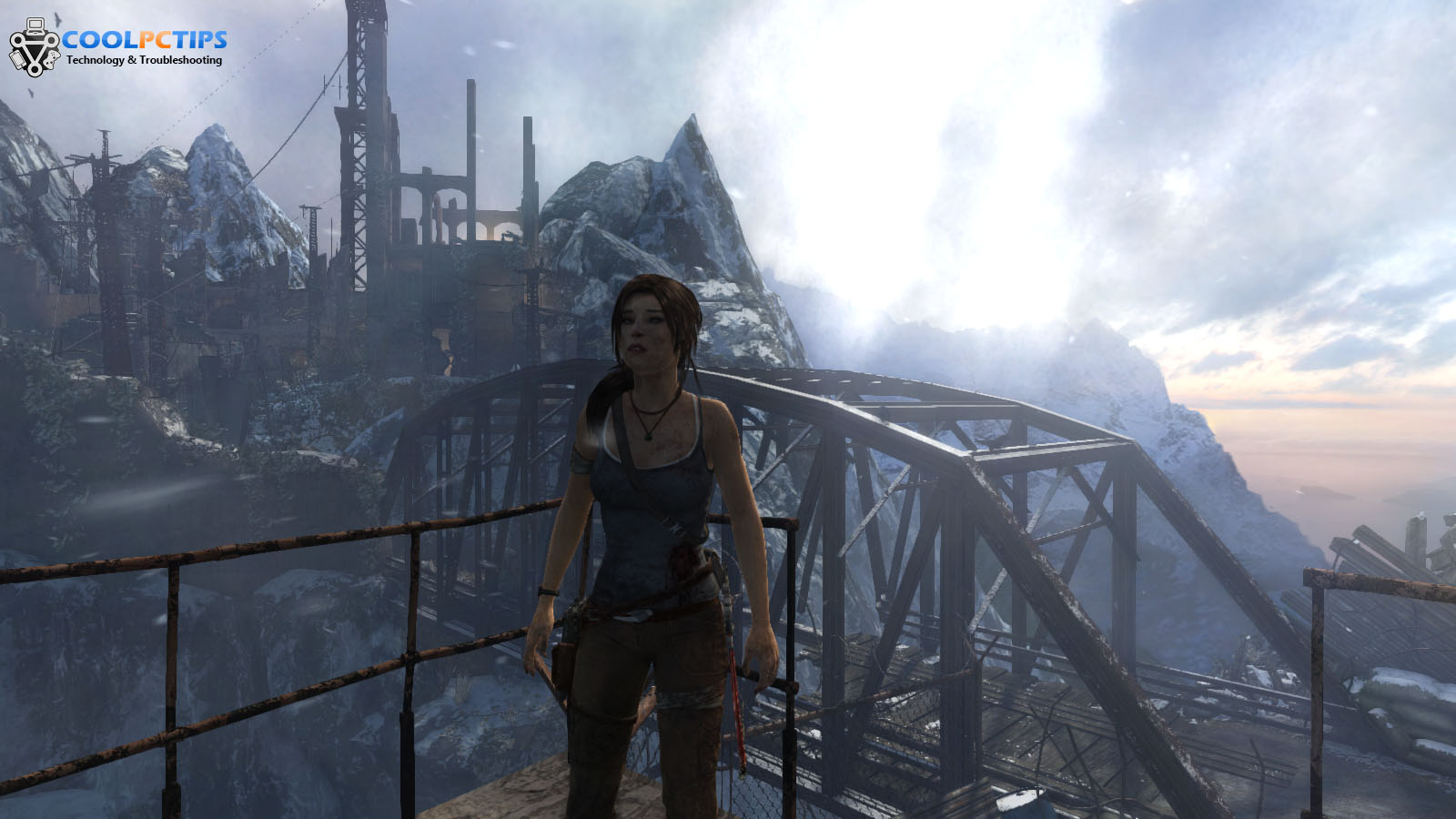 So should you get this game? Definitely. Even if you’re not a fan of the Tomb Raider series, it’s worth getting. You’re going to enjoy this game even if you’re not big on adventure games. Square Enix and Crystal Dynamics have done an outstanding job at recreating one of the most beloved characters in gaming and this helps Lara stand toe to toe with the new generation of believable and realistic protagonists. I for one am looking forward to more games in this new series of Tomb Raider and dare I say it? This is the definitive Lara Croft.

So that was our Tomb Raider PC review! Check out the final score and system requirements below, and let us know your experience if you’ve played the game and if you’ve got anything to say about the review.