After long delays and missed deadlines, the OnePlus One has finally gotten a taste of Android 5.0.2 Lollipop, in the form of Cyanogen OS 12. When the ‘flagship killer’ arrived last year, it was praised for its specs and build quality, not to mention the extremely affordable price, but a lot of people jumped ship because they were promised Android updates within 90 days of Google’s release. It’s quite apparent that both OnePlus and Cyanogen have failed in this regard, but the update is nonetheless a welcome change from the aging Android 4.4.4 KitKat build. Rolling out as an OTA (Over-the-air) update since April 14th, the update should be available for all OnePlus One owners in 2-3 days. 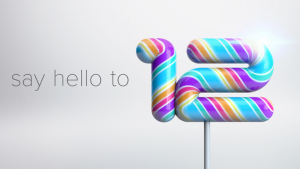 Now called Cyanogen OS 12 instead of CyanogenMod 12S according to the earlier naming convention, this is basically a standalone build specifically made for the OnePlus One, and includes exclusive features, such as 4K video recording, a customizable quick menu and gesture support. It unfortunately still runs on Android 5.0.2 and not the latest Android 5.1 build, which is reserved for the Cyanogen OS 12.1 update coming sometime in the future. Here’s the feature list, from the official OnePlus blog:

Regular features from CyanogenMod 11S carried over include:

Another new addition is the email app, which is now replaced by the third party app Boxer. All Cyanogen OS 12 users will get the premium version of the app for free, which includes enhanced Exchange support, multiple accounts, customizable LED notifications and much more. There’s also the Baton app, one of the best Android app switchers, which lets you link apps to all your devices over the cloud.

Now, as we mentioned earlier, the OTA update will roll out in phases, so you may not get it immediately. Also note that it requires the previous incremental update to CyanogenMod 11S, and is a full update, weighing in at almost 600 MB. If you can’t wait, however, and are comfortable with flashing your phone you can download the full flashable ROM from here. You will need to be on CyanogenMod 11S, fully updated to receive the update, and if you’ve flashed Oxygen OS, OnePlus’ homegrown version of Lollipop, you’ll need to flash the full ROM to get Cyanogen OS 12. Do let us know what you think of the new OS, and if you need any help!