After 25 long years, we finally see a Microsoft logo change! After completely reinventing itself and most products, it comes as no surprise that Microsoft has finally changed the age old logo. The introduction of the modern UI changed the look of everything related to Windows and the new Microsoft logo reflects precisely that. Microsoft’s new mantra seems to be simplicity and minimalism, and the new logo sticks to those ideas. Interestingly, it mirrors the colors of the older Windows logo. Well, it’s been a long time since the brand identity of Microsoft has changed and this reinvention comes at a time that could very well change people’s perception of all Microsoft products and the brand as a whole. Let’s have a look at the old logos, shall we? 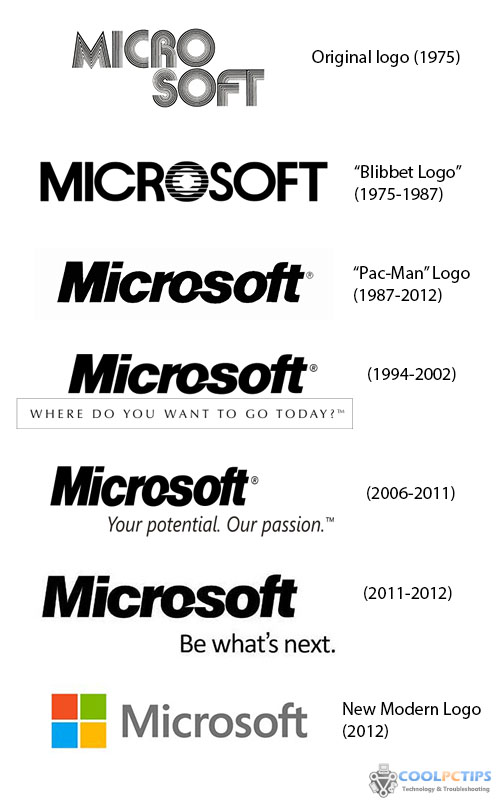 So the most recognized logo, called the “Pac-Man” logo, designed by Scott Baker was used for 25 years, only with changes to the tagline. Even the logos of its products have been changed. Now, the new logo might be way too generic or boring for some. Interestingly, the Windows 1.0 logo was also quite minimalistic and Microsoft seems to be taking inspiration from the 80’s. With the focus shifting to user friendliness, efficiency and minimalism, consumers can now expect products that skip on the fluff and deliver functionality without being bloatware. Microsoft is now moving towards a unified environment where all its products are one step closer to seamless integration. Sure there’s bold moves being made, like the decision to make Windows Phone 8 available only on new devices, but it’s all for the greater good. Is Microsoft breaking the mold as far as technology as concerned? For a company that’s been criticized for not innovating much, this is sure a knockout punch. And we don’t mean just the logo change visually, it represents a change in approach. So what do you think about the Microsoft logo change and  overall reinvention? Do drop us a line and let us know! We’ll leave you with a nice, short video that introduces the new logos.