It’s been a tough couple of years for Research in Motion (RIM), the Canadian company responsible for BlackBerry smartphones. Despite still being popular in a few countries like India, the global user base of BlackBerry smartphones has gone down tremendously due to Android, iOS and Windows Phone devices. BlackBerry devices were always known mainly as business oriented devices and their communication features were quite unparalleled in the day. However, after the smartphone boom, their sheen diminished and quite honestly, they remained behind the times running on an outdated OS with hardly any app support. Stocks dropped and RIM was in the danger of completely going out of the game. But a new OS and devices were announced that would supposedly bring BlackBerry back into the big league. Set for release in early 2013, a near final version of BlackBerry 10 was displayed running on a prototype device called “Dev Alpha 2”. The first Dev Alpha phone was doing rounds around the developer circuit since May 2012 and according to BlackBerry, was a physical platform to test apps but is in no way representative of the final phone design. After the meatier recent reveal, we’ve got a lot of info about how the newest BB OS will turn out, so here’s our BlackBerry 10 first look!

BlackBerry 10 First Look – Details about the devices and OS: 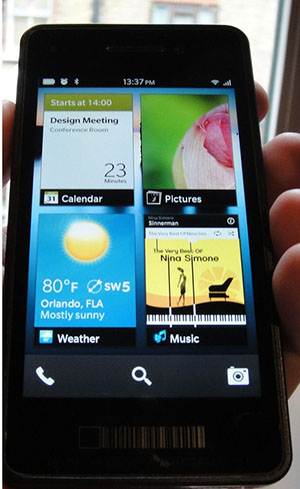 Gone are the days when BlackBerry phones had low resolution screens, it was revealed that the new standard resolution for slab-like phones is 1280 x 720 and the same for QWERTY phones is 720 x 720. The BB10 OS is based on QNX, itself a UNIX based OS that was acquired by RIM in 2010. Even though BlackBerry said that the Dev Alpha devices are not indicative of final devices, we can at least get an idea of what to expect from the new BB10 devices slated to release in early 2013. It has a 4.2 inch screen with a pixel density of 349ppi! Not to mention 1 GB RAM and 16 GB of internal storage. No information about the processor, GPU and such though.

The OS itself has undergone a complete overhaul and there’s nothing that would liken it to its predecessors. At first glance, it looks like an amalgamation of Windows Phone and Android. It’s got the customizable wallpaper based background a la Android, but the icons and such are uniform tiles, just like Windows Phone. You can add upto 8 apps to the home screen that will update in realtime, just like Windows live tiles. Overall it’s a good looking interface that’s functional and clean.

Productivity and efficiency are the two things BlackBerry 10 is most focusing on. Everything is more streamlined compared to earlier iterations. One of the cool new features is the “Flow” UI. Basically, instead of the whole open and close dynamic with apps and functions on most phones, a user can simply swipe around the BB 10 screen to perform different functions. For example, if you’re reading a PDF file from an email, you could swipe the screen rightwards to “peek” at the email you opened it from and move further to see the BlackBerry hub from where you opened the email. Speaking of which, the BlackBerry hub is the one stop shop for all communications. All emails, texts, Facebook updates, Twitter updates, WhatsApp messages, BBM, messages you name it, will be in the same screen. Of course, BBM also has a new avatar based look.

Then there’s the notifications that you can view anywhere, by simply swiping the bottom right corner diagonally upwards. It displays all notifications instantly. The lock screen is also pretty interesting, while you’re swiping upwards to unlock the phone, progressively the underlying screen is revealed and you can resume whatever you were doing before the lock. Even simple settings functions, alarms and such are mainly gesture dependent. Is it complicated? Not very much, but some might find all these gestures difficult to remember. It’s a nice change, a complete gesture based UI. However, with all apps and functions running in the background, battery life is a very big concern. Not to mention general performance slowdowns. Then there’s the operating modes. Users can set a work mode and a personal mode with completely different apps, settings and looks. For example, the work mode can have a bunch of business use apps and the personal mode can have a different set of fun apps. States can be switched anytime, but data cannot be transferred between them for security reasons.

Finally, there’s the AppWorld, in which BlackBerry promises a load of new apps, movies, TV shows, music and more. Yep, even full length movies and albums will be available for download, by content partners haven’t been revealed yet. It’s an attempt to create a whole media/content ecosystem that could just turn out to be the trump card for RIM. And finally, the camera is another feature BlackBerry is really banking on. Let’s say you take a picture, but it’s a millisecond or two early or late from perfection. You can simply move “backward” or “forward” in time to save the best image. It sounds pretty cool, even though it’s just a simple super fast multi-capture function.

In all honesty, BlackBerry 10 looks very promising. It’s great to see a company come out with something really new despite being in a financial crunch. A lot is riding on BlackBerry 10 and this could make or break RIM. Devices running BB 10 will hit the market in Q1 2013, and BlackBerry lovers, fear not! There are full QWERTY keypad phones on the way too. They should be too, it is a signature BlackBerry trademark after all. RIM has so far neglected to mention anything pertaining to hardware, so specs of the upcoming devices are anyone’s guess. But 3D games running on the phone look really good, so we can expect pretty high specs as well. We’re anticipating the launch of BlackBerry 10, could this be a return to form for the former giant? How will it fare against the already established Android, iOS and Windows Phone devices? Do let us know what you think about the BlackBerry 10 first look!