Sayalee Laluskar, An Indian Designer based in USA came up with an ingenious invention of solar sun glasses to recharge charge smart phones on the go. The simplicity lies in the mini-solar panels fitted on the clip of the shades. These solar panels harness solar energy all through the day. At night they can be detached to help charge mobile phones. This alternative charging invention for iphone 5 took place as a part of a project at Miami Ad School, San Francisco, USA. These sun glasses are named as ‘Ray-Ban Shama Shades’. 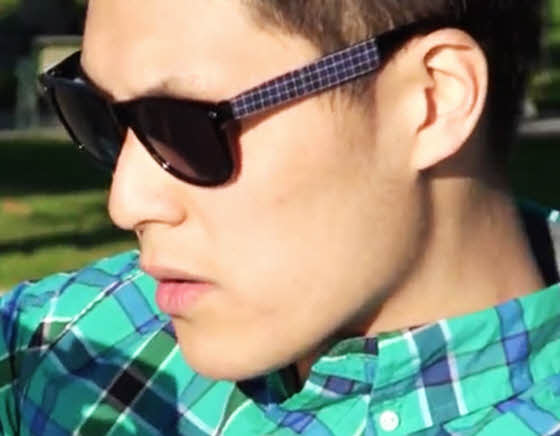 The small solar panel on the side arms, and are said to charge an iPhone 5 when the sun goes down.  The panels look like gridded designs, but are virtually invisible. The device soaks the solar energy through the day and when a shot of extra power is needed, one needs to detach one of the detachable arms which reveals a connector and fit it into the charging port of the phone. This invention is great to protect your eyes and also to charge your phone! A perfect blend of technology and fashion! Use your phone all through the day and night without a charger, your sunglasses will do the job! Whether suggested before or not, it is a great invention. The Indian designer turned Ray-Ban glasses into iphone 5 charging device.

Commentators feel that rigorous testing is needed as the energy would be stored through the whole sunglasses and not be technically viable. They also stated that solar power would be sluggish while transferring power compared to the wall power. The Shama has promised to solve one of the most pressing challenges of smart phone technology-Battery life. 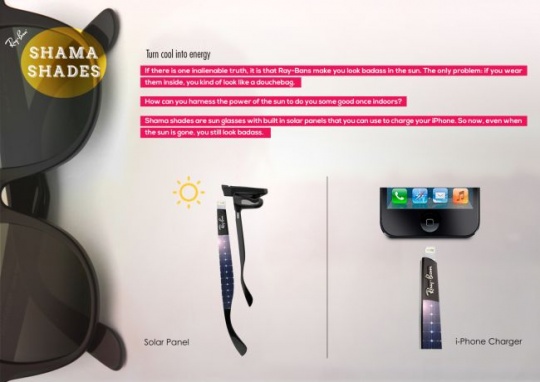 Solar panels have been used earlier on wearable gear ‘Ralph Lauren Backpacks’ and recent Apple application patent for a system to outfit mobile devices with their solar power converters. The name ‘shama’ means lamp or candle in urdu. The concept device tends to open a way for draining batteries. Though the practicality of the concept is questioned, it seems to be taken into consideration.

Google glass is getting a wider release soon and one huge rival could be Ray-Ban’s Shama shades, new prototype solar-powered sunglasses.  With the student project  hit for draining batteries a new hope has risen from Ray-Ban sun glasses.