Crysis 2, one of the most hotly anticipated games of the past decade, is all set to release on the 22nd of March, 2011. Continuing the story from Crysis and its parallel expansion Crysis Warhead, the events of Crysis 2 take place in 2023, three years after its prequels. A break from the usual jungle setting used by developer Crytek, Crysis 2 will instead take place in a “concrete jungle”, New York City, now desecrated by the alien invasion.

For the first time in the series, Crysis 2 will also release on consoles Xbox 360 and PlayStation 3. Crysis 2 will be the first game to utilize the brand new CryEngine 3 game engine. Showcased at the Game Developers Conference 2009, CryEngine 3 wowed developers and consumers alike. It features Crytek’s proprietary technology, improved for the new generation.

Gamers all over the world would do well to remember the extremely high system requirements for Crysis. It was famous for bringing some of the best gaming PC’s to their knees! Yet the developer claims that Crysis 2 will in fact have lower system requirements than its predecessor. Whether or not this is true remains to be seen, as technical previews don’t really cater to the lower end of the consumer spectrum. Crytek had set a benchmark for graphics with Crysis back in 2007. Even now Crysis is still “the” game used to put new gaming PC’s through their paces. The developer aims to make Crysis 2 better looking than Crysis, and claims combat will be “catastrophically beautiful”. 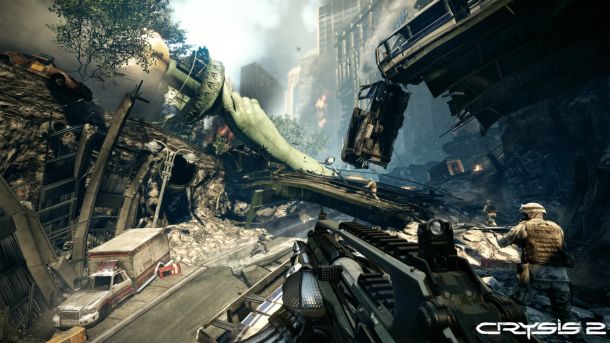 Since Crysis 2 is taking place in a city instead of a flat out jungle, the levels have been described as “going vertical”. It will be interesting to see how the Crysis series introduces some amount of linearity, compared to the previous two iterations. Nonetheless, Crytek is aiming to make the action as fast paced as ever.

Initial screenshots and videos suggest that Crytek has indeed gone all out to make Crysis 2 the best looking game on the market. Even though not complete, it looks better than any current PC or console game out now.

The thought on most people’s minds is whether the consoles can hold up to such visuals. Previews on the Xbox 360 have reported smooth gameplay and excellent graphics, not on par with the PC version, but good looking nonetheless. Interestingly, there has been a scarcity of previews of the game running on the PlayStation 3.

And so, the newest chapter in the Crysis series, a series that has become a behemoth in gaming circles within a very short period of time will probably see the light of day in early 2011, so mark your calendars for exciting first person shooter action!