We all would have heard about robots, Robots are nothing but electro-mechanical devices that perform a specific job, as specified by the user. We buy a lot of products everyday, ranging from household utilities to big sized products like computers, television,  refrigerator and so on. How much time a person needs to make these products ?  I think a lot but, using a robot a product can be manufactured in very less time. Now talking about efficiency a robot is faster and efficient but not smarter than a human, as it is the human who designed it. If anyone has seen the movie I Robot (starring will smith in 1998), you can see clearly how humanoid robots are used in every household. We need that in our lives to make our life easier. All of us are always back of luxury and the next generation would be with the help of a robot. Let us consider that the battle like in the movie does not happen, its a fantasy 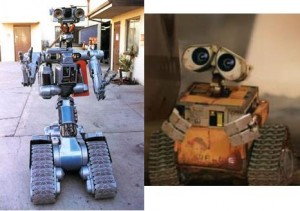 Let me talk something about different parts of a robot and how it really works in a glance ,

2.) Actuation: These are like the muscles of the robot, these convert stored energy into movement. The Best example of actuators are electric motors.

a.) Touch: Robots need special sensors in them, to allow it to understand what is the object touching.

b.) Vision: The robot are provided with special kind of  sensors that detect electromagnetic rays. These are usually designed using solid state physics

4.) Manipulators: We want the robot to do some work, then it is manipulating the work, like picking up objects, so the arms are refered to as the manipulators. 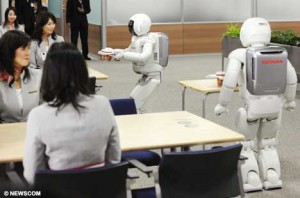 5.) Locomotion: We expect movement from the robot, the movement is refered to as locomotion.

a) Speech recognisation :  It is really hard for a robot to understand each and every sentence that a person speaks. There are about 1000 languages with thousand different ascents with lot of variation. every person has a different combination of his speech. This is achieved using speech recognisation.

b) Gestures and facial expressions are also achieved  in a robot using a high end technology.

7.) Control: There are a lot of autonomy levels depending on how much freedom we want to give to our robots.

There are robots used in war and space nowadays , we need more like them .Coming to a different arena, we need better products due to growing technology. for better products we need better efficiency in the manufacture process, this is achieved by robots. With growing needs more and more goods are needed with higher efficiency, this can be achieved by robots. Humonoid robots are those that actually look like humans, they do functions as per the tasks assigned. Humonoid robot need artificial intelligence with  advanced neural networks for their operation.

What do you think the future of robotics would be like?