Have you heard about Nokia Lumia 800 ? Well, Nokia has launched the most affordable Windows Smartphone series targeting Indian Market. Nokia Lumia 800 is the latest model released by the company along with Lumia 710. Nokia was very successful in India, until Google android came into existence. There were few days were Nokia used to have 50% share in the Indian market. Now Nokia is having a share less than 7%. The competition is very high from iPhone OS and also from Google Android. The regular updates from these two operating systems made Nokia to lose their market in India. Keeping this in mind, Nokia has launched two new smartphones which will be based on Microsoft’s new windows phone 7.5 OS.

Nokia Launched its “Lumia 800” and the “Lumia 710” to fight back against Apple iPhone and Google Android software. Nokia has a strong faith in these two models that they will strong hold in the Indian market pretty soon. They released total four basic phones in this new series of smartphones. They named it as “Asha” which is a Hindi word for hope. These phones will be relatively cheap and will have all the features like other costly mobiles have. The phone will have a touch screen, 5 MP camera. bright screens, 32GB storage for music and videos, and a long battery life.

Nokia’s new boss, Stephen Elop is confident that the launch of Lumia will give a rebirth to Nokia’s market. Previously Elop warned that the company was stuck on a “Burning Platform”. Elop said that the phones would blur the boundaries between featured phones and smart phones. It will bring a next level of internet usage across the country. Elop said that the “Lumia is the first real Windows phone” and predicted the company would be the leader in “smartphone design and craftsmanship”.  The company is pretty confident on the solidity of Nokia Lumia 800 and compared it to HTC and Samsung by saying though they have decent enough models in market, but will not be as solid as Nokia Lumia 800. 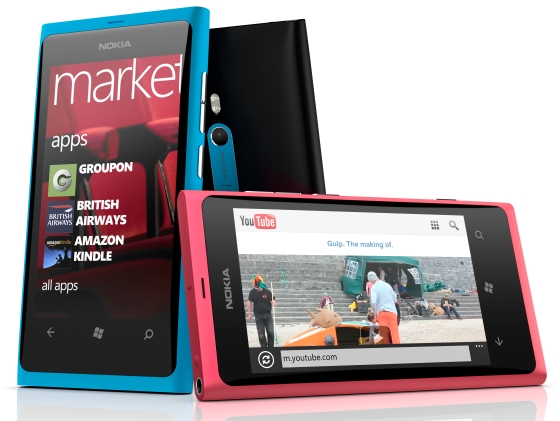 It will be a million dollar question now, that will people accept Nokia Lumia 800 and Other 4 models ? Windows phone when compared to android are not that flexible. People are habituated to use more android when compared to iPhone or Windows. It would be Nokia’s show up to tell their rivals that even we are not out of the race. In-spite of having BADA OS for Samsung, they excelled in designing android devices, which hit the market super strong.. The best example is the post we made recently on Top 10 Cheap & Best Android v2.2 Phones Under Rs.10,000 For This Diwali You can find almost 5 phones in that list where all the phones are very popular in market now.

If Lumia is a good success in India, then Nokia has no reasons to look after Google Android or Apple iPhone. if its a failure, then its better to work with android software and design new devices according to the trend. After all android will be future market anywhere in the world. Its really well and good that Lumia 800 has finally made a Windows phone good enough to compete with their rivals. But they can only stay in market with regular updates and good customer support. lets hope this new Lumia 800 will bring some change in Nokia shares and market. I guess you all are waiting for Nokia Lumia 800 now.