Mobile Internet is a fast growing industry which targets youth and middle aged customers in India. People are buying the best 3G Internet dongles, data cards for remote Internet access and burning through their bandwidth limit within a week or two. These 3G data plans are very limited and charge a lot after the limited 3G benefit, so it is always better to be a prepaid customer, rather than post paid. You might have searched for unlimited 3G data card tariffs with many telecommunication operators and got disappointed for not finding any. But fortunately there are the best 3G network providers in India, which provide unlimited 3G data access with a few conditions.

Check out the list below for selecting your unlimited 3g plan, and enjoy the benefits of unlimited Internet access with the help of your 3G dongle.

There are many unlimited 3G plans in India, but almost everyone follow the same pattern of restricting the user after a limited benefit. We listed out few popular 3G dongle plans according to the mobile internet service provider. Check out which 3G dongle you have and what 3G plan can suit you the best.

Many people complain about the Airtel 3G Dongle slow internet issue, which can be fixed with help of a upgrade.If you are already facing this issue, you should upgrade your Airtel 3G dongle connection manager to avoid these connection errors. 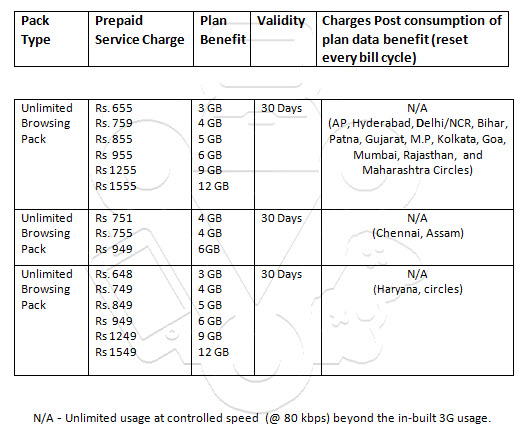 These are the available unlimited 3G plans from Airtel 3G. All these above plans will contain a 3G benefit condition, which will degrade your 3G internet speed when exceeded. For example, if you have recharged your account with Rs. 655, you can enjoy the high speed Internet until you finish 3 GB of data transfer, after that the Internet speed from 7MBPS will come down to 80kbps, which is insane. To avoid this, either you have to restrict yourself for not spending much bandwidth, or by billing again with same data plan.

Earlier Idea 3G network had many server issues and connectivity problems which made their users to shift to other mobile network providers. Though Idea 3G got an unlimited 3G plan, its 3G network is still limited to very few locations in the city outskirts and small towns. Check out the below unlimited 3G plan from Idea network. 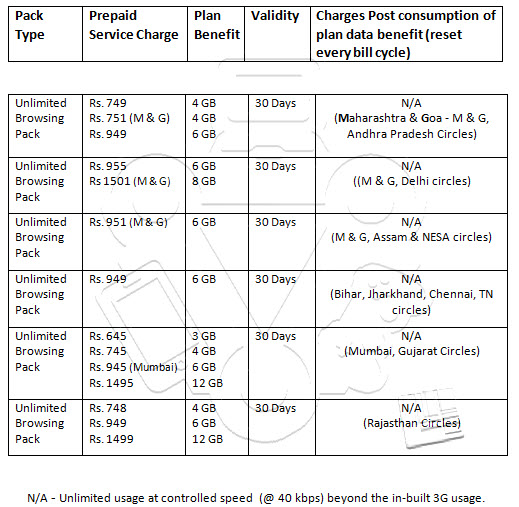 These are the various plans provided by Idea 3G in different circles of India. All the different circles have different plans and everyone has to obey the 3G benefit they are offered. If you want to know your location 3G tariffs, please drop us a comment below.

Aircel is very popular for its Pocket Internet plans which made many people to shift to Aircel. The unlimited 3G dongle plan from Aircel is pretty clear and straight forward, which offers unlimited 3G bandwidth from Rs. 198 onwards. The 3G benefit policies are same as the other 3G network providers, but the 3G degrade benefit is 128kbps, which is far more better than Idea, Airtel and Reliance 3G services. 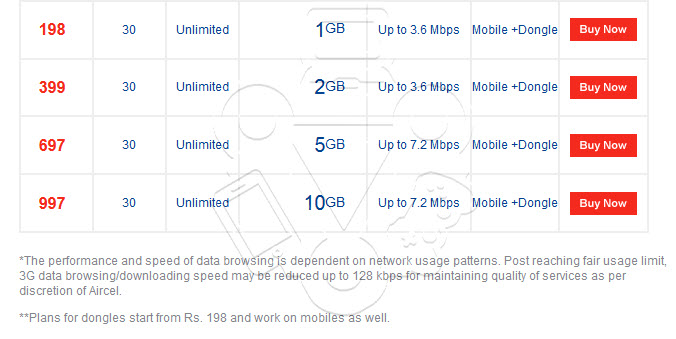 As you can see the above tariff plan for Aircel 3G dongles, its pretty clear that the Rs 997 plan has an amazing 10 GB benefit up to 7.2 Mbps 3G speed, compare to other 3G network providers.

Reliance 3G unlimited data plans are very limited with their data card offers. Initially they will offer you a special recharge of Rs.597 with 5 GB 3G data with 30 days validity, and later offer 5 GB, 10 GB and 15 GB as mentioned below.

Personally we would say Rs 1300 for 15GB data is simply amazing, and also the 3G network signals are decent enough to browse the Internet. 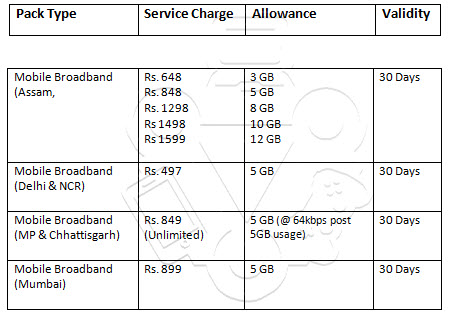 Except MP and Chhattisgarh, Vodafone will not allow you to use the unlimited 3G Internet pack anywhere. So if you burn the bandwidth before the validity time period, you have to recharge again to continue their 3G services.

These are the most popular Internet 3G plans in India, All these unlimited 3G data card tariffs are applicable to their respective dongles or data cards only. If you feel we missed out something important, please let us know via comments.