For those of who are unaware of E-Sports and its importance, E-sport comprises of all types of professional gaming be it on PC or Console and has got a worldwide phenomenon. As there are world cups for football and cricket there are World Cyber Games [WCG] for E-Sports where in gamers around the world take part in it if they qualify as National finalists for that particular game in their respective country. Apart from that there are several national level tournaments held in our country out of which two BIG GUNS are the Bring Your Own Console [BYOC] and [ICGC] which run successfully every year and are heavily sponsored by Companies making gaming gears like Razer, Steelseries, Cooler-Master, AMD, Ati, Nvidia, etc who are also the weavers of gaming world.

During the early 2012 an announcement was made in the gaming community which forever changed the scenario of the INDIAN gaming in the E-sports level. A tournament called Indian Gaming Carnival [IGC] was announced with whopping prize money of Rs.1.5 Crores. This was super huge as this could take the Indian gaming scene to another level, the news went viral all around the gaming world and gamers began the hard work to make it into the finals. 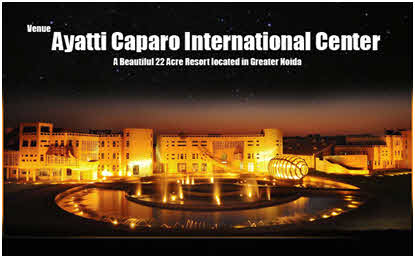 These were few of the highlights provided by the IGC team:

• India’s Largest Gaming & Electronics Expo.
• Spanning over 21.8 acres at Ayatti Caparo, a super-premium property in Greater Noida.
• Over 300,000 expected attendees with 20,000 gamers in a period of 3 days.
• Prize money of Rs 1.5 Cr (USD 300,000) in total.
• After Party each day with category ‘A’ performances.
• Various international teams and players participating in the tournaments.
• Gaming across all verticals – PC, Console, Mobile/Tabs.
• Celebrity Visits.
• Exhibit space for over 200 brands.
• Attempt to break Guinness world records.
• Seminars on various aspects of Gaming.
• Dress as a Gaming/Anime character and win prizes (COSPLAY).
• Product launches and various other activities.

Already speculations were being made on it whether it would turn up to be as successful as it intends to be or it will be a big DUD. 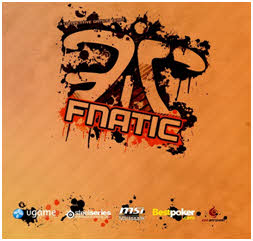 Team Fnatic which is considered as one of the top teams in the history of the gaming world from Europe already declared that this would be a failure based on their own surveys and didn’t care of even having a look into it.

But this was huge for Asian Scene and everyone started gearing up for the D – DAY. International teams like Moscow-5 [M5] from Moscow, Team MiTH from Thailand and Orange E-sports from Malaysia were some big names that came into the competition. At this point of time every Indian gamer was so proud of this as it would leave a mark on the gaming fraternity.

Finally the day arrived, International players landed and moved on to their hotels, local players were already set to go. When the gamers reached to the arena, to their shock there was no proper arrangements made which would qualify the place as a gaming arena because the place didn’t even have electricity on the first day.Players were asked to wait for few hours and this carried out all long the day and finally the gamers were asked to return the next day. 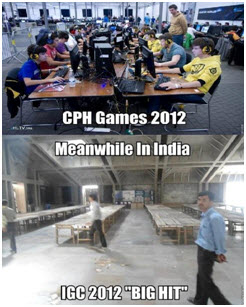 Displayed pictures are real and shot at the arena. This was a huge disappointment for all the gamers and the arena was filled with chaos resulting in the crowd to go bizarre, people started demanding refunds and left the arena. Finally games like Battlefield were cancelled and the matches for the other games like Counter-Strike and Call of Duty started. Due to the lack of organizers and bad maintenance the tournament had its downfalls and somehow the tournament ended with many odds out of it. Winners were given the so called big plastic cheques and were assured that they would receive their prize money soon and the unhappy foreign lot left the country in disappointment hoping for their cash prize yet to be received. 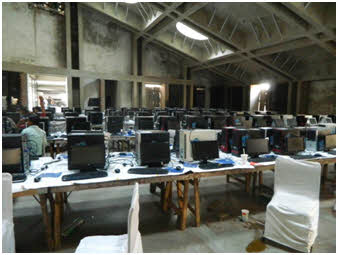 Later on the angry lot manhandled the main organizer and made him bleed as not even 10% expectations were met with keeping the cash prize on hold. This turned out to be the Biggest Scam in E-Sports as none of the winners have received their prizes till now. This led the whole nation to bear a lot of shame as the international players spread the word of how they were looted in India. This is sad but a real story that actually doomed the chances of Indian gamers to make a mark at international level. Please share your views on IGC responsibility.