The summer of 2007 saw a revolution in the gaming industry with the release of some mind blowing FPS games like Crysis, BioShock, Medal of Honor-Airborne, Ghost Recon II and Tom Clancy’s Rainbow Six: Vegas. The same year saw the release of another FPS with a very unique flavor called The Darkness. With a gut wrenching storyline and some spine chilling game play elements for the horror/action genre, it gave other games a good fight and even featured as Game of the Month for August 2007 by Game Informer. I played the Darkness after hearing about the release of its sequel and I liked the theme of the game. Overall, it was a good investment of time. 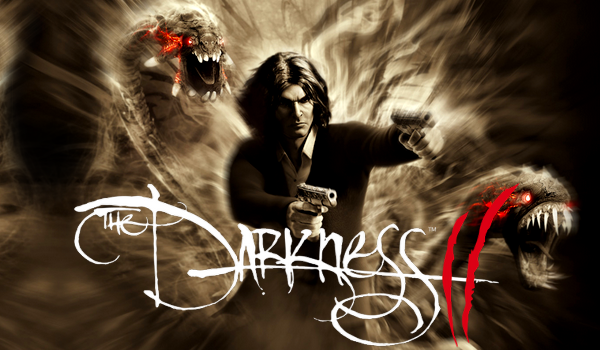 After a long wait of 4 and half years, Darkness II hit the market in February 2012 with huge expectations from gamers who played the previous part. So how well did the game do? Read on for the complete The Darkness 2 PC review! 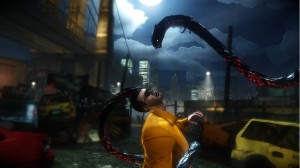 Getting him ready for a full cavity search

Jackie Estacado returns after his vendetta with Uncle Pauli Franchetti from the first part. Two years after the events of the Darkness, Jackie now sits at the throne of New York’s Mafia. He is still haunted by the memories of his long lost love and has come to control the dark power that once drove him to a killing frenzy, the power that held him back from protecting Jenny. With nothing to lose after losing her and his sanity to the Darkness, one could imagine his duties as sitting in his ‘Godfather’ chair and directing his consigliore using minimal words, hand signals or just eyebrow movement to ‘get a job done’. The game starts off with Jackie walking into a well-lit restaurant and he’s seeing these twin sisters (something interesting to do). The date becomes so much more interesting in a couple of minutes after Jackie starts talking to them.

Jackie’s new enemy, Victor Valente, who apparently needs a facelift, is pursuing the occult power of the Darkness for himself. Assisted by an entire army referred to as the Brotherhood, Victor proves to be quite the antagonist Jackie missed in the initial release. Jackie is forced to unleash the darkness within after years of dormancy, which he buried inside him with a lot of self restraint. The fight becomes personal when Aunt Sarah gets dragged into this mess. Jackie dies more than a couple of times in this part as well making him a regular, up and down the highway to hell. No more world war battle zone. This time the other world has the setting of an asylum. Surprise Surprise. .Jenny is the head nurse and many of his own mob members are seen as patients here. Jackie is pissed off by most of them, who keep telling him that his real life is actually his hallucination.

Back in the real world, Jackie is dying a cancerous Jesus Christ style death. Victor has found a way to drain the darkness out of Jackie as he nails Jackie’s hands to a cross and places the mystic Siphon in front of him, a device to restrain the Darkness, that was created by a lady referred to as the Angelus, who in fact is the Nemesis of the darkness. You have to read the comic series to know how deep and awesome the story runs. 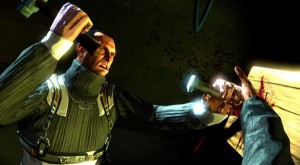 Nailing someone. You’re doing it right.

The game has changed drastically compared to the first part in terms of looks and the very experience. The developers from Digital Extremes have taken over from developers Starbreeze Studios, who came up with the initial installment. The toon shading graphics style has been adopted for this version of the game, which has its own advantages and downsides. The hand painted, comic book like feel makes the game very bright and flashy compared to its predecessor. The artwork is excellent but at the same time, elements in the game feel unreal. There’s been a lot of commotion about the graphics style, there are those you liked the new graphic style and others who think that it was the ruining factor. I liked it until I saw the tentacles piercing the chests of the enemies. I liked it until I saw blood. Before I started the Darkness 2, I was so relieved that I could finally play it using a keyboard. Using a controller for this genre of games is like driving a monster truck on an F1 Track. The keyboard version, I have to confess, has a challenging control scheme as well. 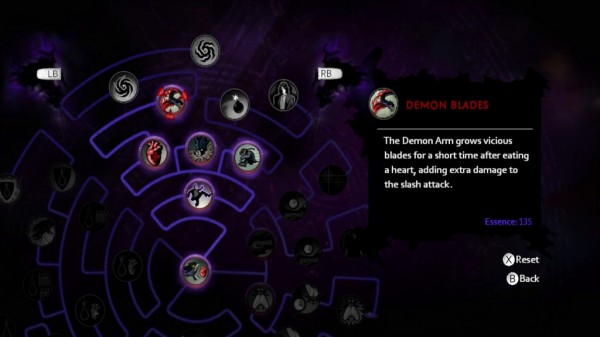 This screen is a big motivation to continue playing the game. So much to unlock.

The game took me around 7 hours to complete. It would’ve taken less I didn’t have to get up for a piss or take a brief walk wondering why am I going on till the end. It is straightforward and linear with very little freedom to do side quests and roam the whole city of New York freely. There’s a co-op multiplayer version where you can play different characters who play side arms to Jackie. Its funny they have an Asian who wields a samurai sword, A black magician and other characters who maintain the racial equilibrium. Except for the combos each of them can perform, there’s nothing else that interested me.

Though blood and gore scenes look awkward several times, Fatalities are pretty interesting. Some of them requires you to have Chris Adler like abilities with the mouse. I felt the game allowed more freedom to use both tendrils in the 2nd part than the first part. It was very satisfying to finally see that the left tentacle could be used to tear part bodies of the enemies, unlike the first part, where it felt as important as a wisdom tooth. Unlike the previous game, Only one darkling can be spawned. He’s annoying enough with the noise and the union jack costume.

New voice for Jackie. New hair do as well. Jackie is such a feminine name now that I think about it. He sounds more American this time around. Mike Patton steals the show again as his growly voice of the Darkness. Other characters play their part very well as the dialogues did me in. The music is pulsating and soothingly creepy when required. There are very less female characters in Darkness 2 for obvious reasons, but the ones you encounter are there for a strong purpose. This game is gruesome with a lot of blood, gore and strong language. The game’s ending won’t make a lot of sense if you aren’t familiar with the comics. Let me spoil it for you here, The game ends in 2 ways. In one, Jackie chooses not to kill himself and dances away the game with jenny in the asylum as others watch and cheer. Wait. . maybe they dance too. In the alternate ending, Jackie jumps off the top of the asylum, goes down into the depths of hell to find the real Jenny. What the fish is Jenny doing in hell? That you might want to find out on your own. I’m a story whore when it comes to games. The Darkness 2 doesn’t make it for me. It was hard for me to get on track with such an abstract storyline. After what the first one delivered, hopes were high. I’m not expecting a sequel of Darkness 2 to see the light of the day. Nonetheless, let us know what you think of The Darkness 2 PC review!