Usually we all love animated films, we never know the tough tasks involved in producing a animated film. The time and effort taken for making a animated film a super success is really a tough task for its crew. Each and everyone in the team will try to produce a good animated film by planning from a year atleast. There will be a lot of challenges in making a animated film successful. You might have heard the fact that some directors spend almost 4 to 6 yrs to make a simple, short animated movie. You can find different kinds of genres in these movies, which teach you how to be brave, creative and funny. We have collected Top 10 Animated Films which recorded the highest number of collections all over the world. We hope you all will love these Top 10 Animated Films list, which created a history in collections all over the world. 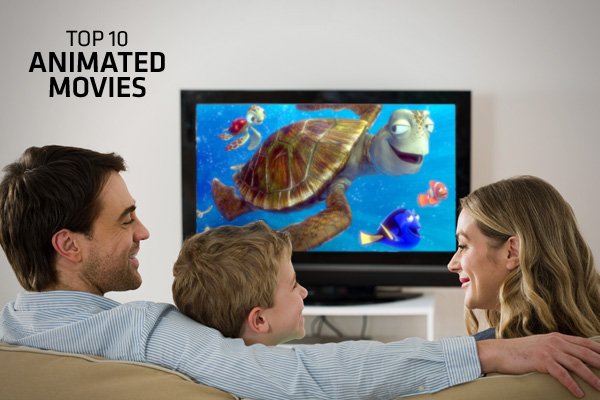 Toy Story 3 undoubtedly is one of the highest watched film. It was liked by the kids and the adults same time. From the year 1995, the toy story games, action figures, merchandises, T-shirts and apparels have made millions of dollars of business as well. 15 years later, Toy Story 3 has give the world wide animation industry and Hollywood a massive blow on the box office and set a statement for the other animated movies grossing at an unbelievable 1 billion dollars worldwide. The figure cant be estimated accurately but it definitely still gradually increasing through DVD sales and other means.

Should you watch it? Yes go ahead,if you have a family with the weekend approaching then this is definitely the movie you have to watch. Kids are going to love it.

The lion king, one of the most followed cartoon along with different version of games. Lion King deals with Simba, a lion prince who swallows his pride and abandons his identity and makes new friends along the way, Timon and Pummba. 1994 was the year which had a cartoon with 30 fps and lots of kids used to like the animation and its characters. Its definitely one of a kind feature film back in those days.

Should you watch it? Definitely yes, kids will love it!

Who wouldn’t love the green ogre character which is voiced by the great comedian Mike Myers himself? The story begins after its prequel Shrek, where Shrek has rescued princess Fiona, and is now married, here’s the fun part. Its now time to meet the parents. Shrek and The king have a very hard time getting along with each other. Prince charming returns after a failed attempt of saving Princess Fiona, where he tries to broaden the gap and chemistry between Shrek and Fiona who is childish at his behavior and frequently is upset about everything and throws tantrums.

Should you watch it? Not if you are aged over 16.

Ice Age: Dawn of Dinosaurs, the events take place after The Meltdown where Scrat is still on the hunt for his acron. Where Sid begins to wish to have a family of his own and steals a few dinosaur eggs. In short, the sub-zero heroes are back to save the Mammal world, yet once again. With an estimated box office collection of over 900 million dollars, Ice Age: Dawn of Dinosaurs

Should you watch it? Yes.

A clown fish named Marlin living in the great barrier reef loses his son Nemo, after venturing deep into the see inspite of being warned constantly. Nemo is caught, and sent to Dentist’s office in Sydney.Meanwhile Marlin tries to save him, Nemo makes a few friends and set on a mission to escape the Dentist and live their lives, free and wild. Finding Nemo grossed over 867 Million worldwide also attracting game developers to launch a game based on similar story.

Should you watch it? Yes,it’s a very good movie indeed.

Sequel to the Shrek 2, Shrek The Third tells you the story of Shrek when Fiona’s Father and the king of Far far away(that’s what they call the kingdom,let’s assume it’s in a place far far away) passes  away. Prince Charming now joins the villains of the fairy tale plotting a coup d’état who feels he is destined to become the new king. Shrek the third hit the box office with a staggering 798 million dollars!

Should you watch it? Yes, only if you are a fan of Shrek and are not allergic to ogres, or even the color green.

Shrek Forever After, voiced by Mike Myers and Cameron Diaz. Shrek, bored and domesticated makes a deal with Rumpelstiltskin to get back to the feeling of being an ogre again.He is now thrown in a twisted version of his story where He and Fiona never met each other and all the ogres are hunted down. Rumpelstiltskin is now the king of Far far away, he sets out to restore the world back to how it was.

Should you watch it? Like I said, not if you’re allergic to color green.

Edward Asner voiced the main character, A 78 year old Carl sets out to fulfill his lifelong dreams of exploring wide places and especially South America.Things get out of hand when he meets another explorer who is 70 years younger, that’s right, the 8 year old kid, Russel. Where Carl’s adventure inadvertently becomes a stowaway.

Should you watch it? Yes, the movie has a really unique concept and well portrayed environment. I say you shouldn’t miss it. Especially the floating house Carl carry’s around his back.

The world famous Kung fu panda, I don’t need to give you any further explanation about the character. Though you might ask, why isn’t the prequel, Kung Fu Panda in the list. Well evidently it took a while for kung fu panda to gain popularity and fell prey to piracy, so nobody really bought tickets  to keep this movie on the top of this list. However Kung fu Panda is placed on the 11th spot of highest grossed movied of all time.

Should you watch it? Yes, highly recommended movie during vacation or on a holiday.

Ice Age: The Meltdown, prequel to Ice Age: Dawn of Dinosaurs revolves around the plot where Sid and his buddies discover that the Ice Age is coming to an end. All the mammals and animals alike set their journey to a higher ground to survive the meltdown. On the trip they also discover that Manny, is not the last of their kind. He finds a female mammoth  , The only problem: They cant stand each other at all.

Should you watch it? Yes, if you’re are on a vacation and need to kill a few hours, then this is it.