Samsung is going full steam ahead, undeterred by the recent losses in court. The latest device from the Korean giant is the Samsung Galaxy S3 Mini. Which is sort of ironic, since there’s flagship phones with the same dimensions (we’re looking at you iPhone 5). It does feature cut down specs from its bigger brother, but for the price it will likely go for, there’s not much to complain about. Even though it bears the “Galaxy S3” name, it only looks similar, there are no other connections to the much more expensive and powerful flagship phone. Read on for more and the Samsung Galaxy S3 Mini specs! 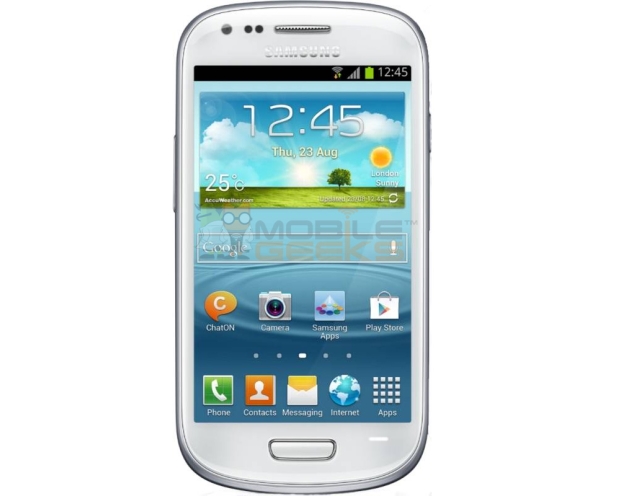 This time around, Samsung has used a ST-Ericsson SoC and overall, the specs are pretty good. It’s not going to blaze through any benchmarks, but performance isn’t going to be bad either. The only low point is the camera, which is pretty much the same shooter as the Samsung Galaxy Nexus. The screen is the same size as an iPhone 5 screen, but it runs at a much lower resolution. Not that we’re comparing, but it’s odd seeing a smartphone being called “Mini” when it’s hardly small in size or specs. The good thing is, the Samsung Galaxy S3 Mini will come with Android 4.1 Jelly Bean out of the box, and in 2 variants with expandable memory support. It sure does look similar to the Galaxy S3, but that’s where the similarities end. Under the hood it’s pretty much a new phone and it’s aimed at an entirely different demographic. Sure, the “Galaxy S3” name might fetch sales and that’s what Samsung’s looking for, but it’s too blatant of an attempt to drive sales when the device has hardly anything in common.

So those were the Samsung Galaxy S3 Mini specs, price hasn’t been revealed yet but we’re expecting it would cost somewhere around 400-480$ or Rs. 24,000 or so. That particular price bracket already has tough competition so it will be interesting to see how the new Mini will fare. Drop us a comment about what you think and of course let us know if you have any queries or suggestions!