Since Need for Speed – The Run, I’ve been twiddling my thumb to play the next of what EA has to offer. Of course, minus most of the unnecessary story which they crammed into it even though the game was crying to do without it. Then came trailers of Need for Speed Most Wanted 2012. A Gamers hopes of this day and age are really high. Aren’t they? So is this one going to a blast like EA Blackbox’s 2005 version of Most Wanted?

Let me not spoil the fun and let you decide. The latest Need for Speed Most Wanted 2012 is based in the imaginary city of Fairhaven – A place whose city roads along with the traffic are a nightmare to drive. That means a perfect environment for an adrenalin pumping race course. EA and British Developer Criterion come together since Hot Pursuit. That was quite a game. Quite a pain for novice gamers. 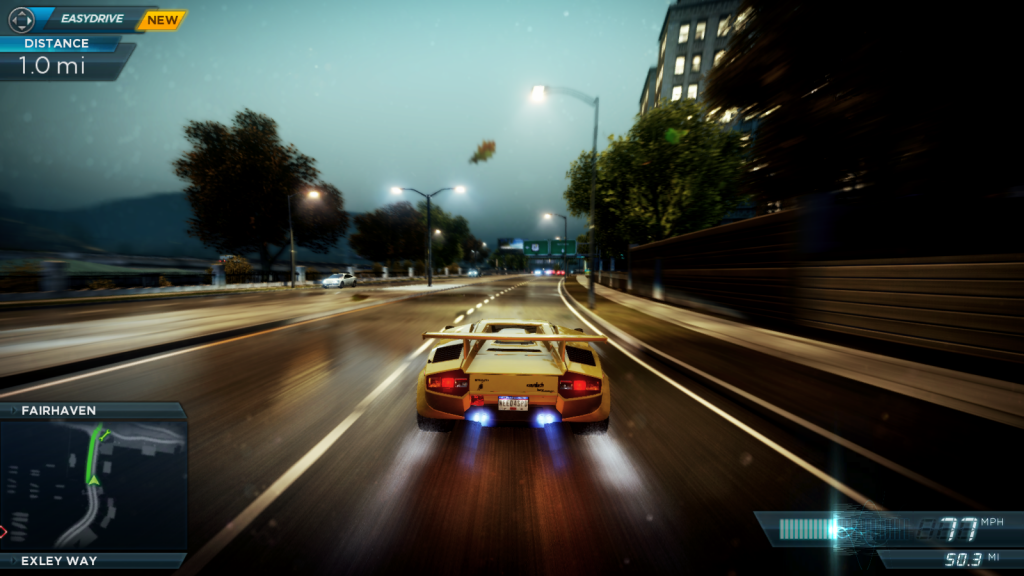 This game is a visual treat with immaculate level of detail in the environments and cars. Among various places to rip, some of the best are at the tunnels of Fairhaven. You enter them at full speed and at the exit, you’re blinded with the sunlight and nothing else, eventually the road and traffic comes into picture and you’ll at times, be baffled by the landscapes.

Accessing races and cars is done using EasyDrive. You need to drive to a race at least once in the game, later, you can jump to it directly from any point in the map. There are more than one of 41 different cars scattered around the sweetly designed sandbox of sprawling freeways and twisted roads. They’re are everywhere. Below bridges, inside warehouses, parked in the middle of parks. So unlike previous games, you have a good reason to be in the free roam mode. They’re all indicated on the map and when you reach a car with a logo above hit, just hit the E key and you’ve swapped cars. That was simple, but wait a minute, I was in the middle of driving to the race damn it! You can always jump back to the previous car using EasyDrive but you start from the original location of the car. 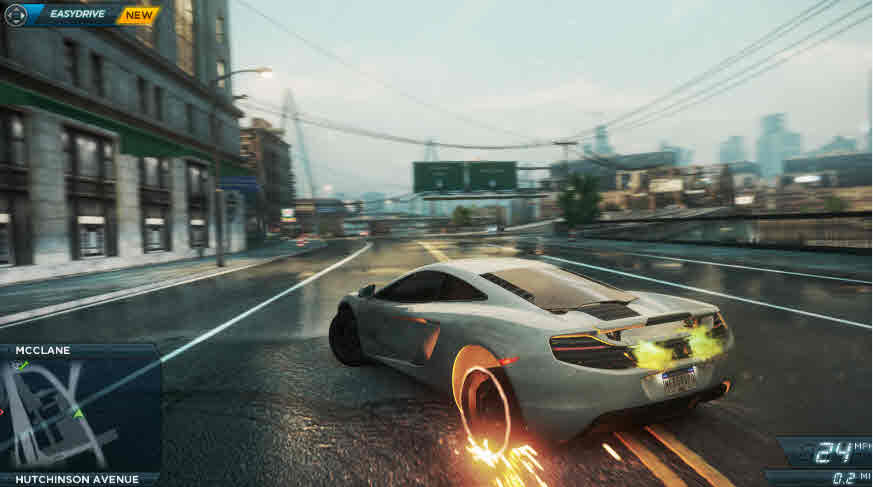 About time for a new set of tires.

With every new car you get into, you have 5 races of variable difficulties, specific to that car. First and second positions unlock a part upgrade which can be installed with minimum effort, right after the race. When you win a most wanted race, the opponent dons the whiny little kid mask and refuses to give up his car unless you perform a takedown oppa Burnout style. Gameplay? “oh look..Cool Car. OMG! I’m going at 120 car speeeed! damn cops. Ram those suckers! whee this game is awesome. lets puck the folice” type. You get a car, you spot a race, win, unlock stuff, iterate. Same old same old. The Autolog feature is pretty nice if you are in multiplayer, and there are cameras all over the place which record your speeds and compare with your online friends. Somehow you get a feel of those features screaming, “get a life, man!”. 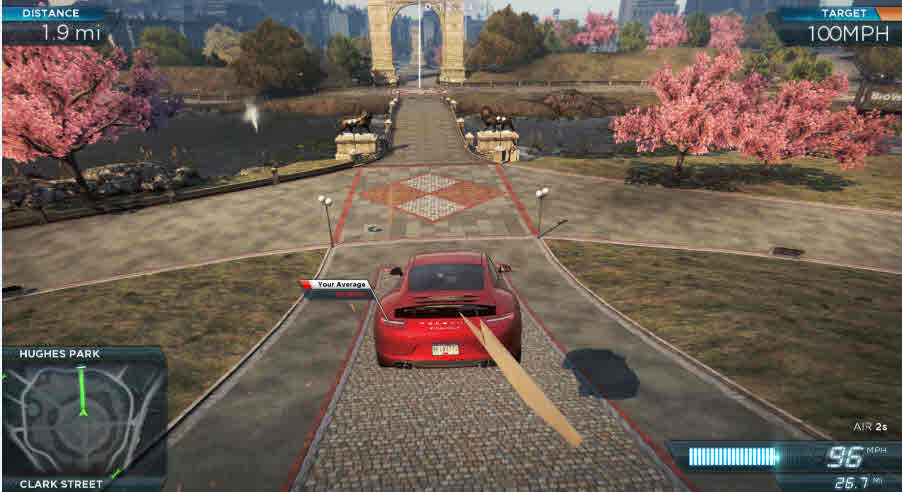 Lots and lots of air time

Of many things I’ve enjoyed thoroughly in this game, the number of jumps it has clearly will stand out. There are a lot of them you will come across in races. There are no barriers which mark a fixed course for the race so people who don’t have the habit of looking at the HUD map are in for surprises. Another thing to look forward to is the way the cars handle. It’s pretty challenging and the damage seems realistic with minimum effect on the cars performance. Then they shit on reality by having drive throughs where cars get repaired automatically when you pass through them. Yes, this game has a proper day and night cycle and you will see it going from dawn to dusk. Play it at max settings and it is a sheer pleasure. I however, am not a big fan of the motion blur and the dust that the cars ahead shoot will get to your nerves. You can’t see a thing. If you experience an inherently choppy frame rate throughout, don’t blame your rig.

2005’s Most Wanted had the best pursuit breakers any NFS game ever had. I knew they were going to make a grand comeback. They didn’t. Wrecking cop cars by tactically placing spike strips or any other pursuit breaker is no option here. Use your car to either slam them or the traffic to your advantage. The traffic in this game will seem like GTA Vice City’s traffic. One thing that’s been pissing me off about NFS games lately is how they feel the need to magnify crash scenes. Not enough making you feel like a glorious idiot by animating the crash, you even lose valuable time in a tight race. 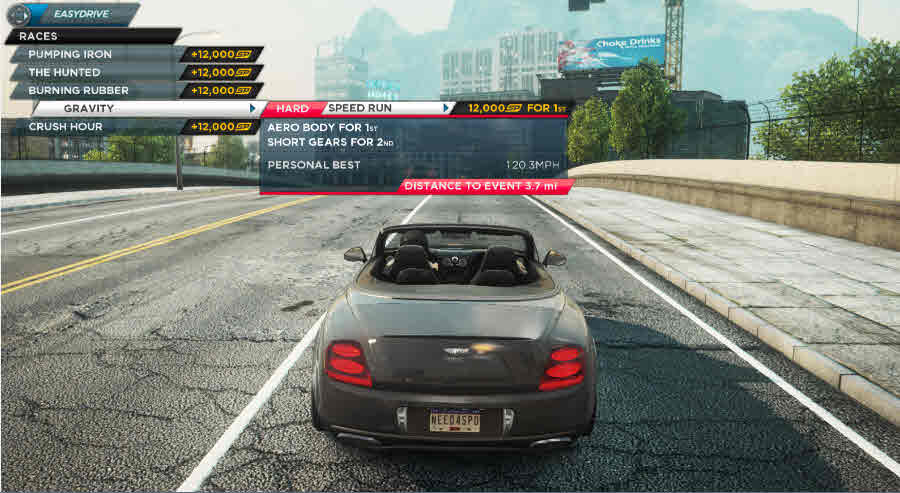 The saddest part is the story. Yes EA, you made a mess of it last time but I didn’t expect you to OVERlearn from the mistake. They decided not to have a plot. Maybe it’s a Criterion thing. You just have to race, earn speedpoints and climb the blacklist. Why God..WHAAIII! You don’t get charged when you get busted. So you don’t have to worry force closing your game as soon as you get busted in high intensity pursuit. There’s not even a cinematic for that matter. It’s like waking up from a bad dream in the car that you got busted it. Before a race begins, you’re shown cut scenes involving your car and the environment around. Some are really spectacular while some are full of crap. Need for Speed games have always had good music to offer. This game is no different in this department. After all, Dubstep isn’t as bad as people say it is. Maybe I was just too engrossed in the game. Looking back on this rant, I’ve carefully tried avoiding expletives, yeah it’s frustrating. I was playing this with a friend and he summed the gist of the game up for me. Burnout with some extra skins. But for the benefit of the ones who will play it no matter what, there’s a lot of challenging gaming waiting ahead. 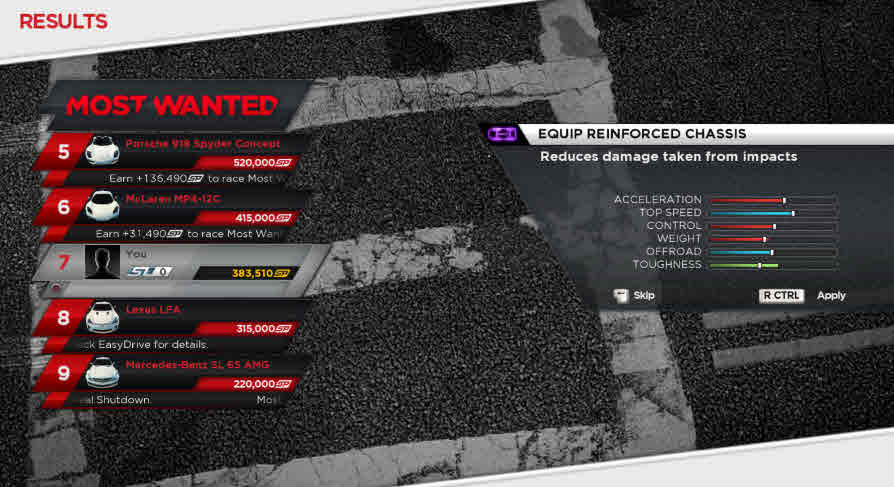 D’awww. what’s with the disappointed look? Don’t be because when you’re driving a Nissan GT-R at 160 mph head to head with a Mercedes AMG, both their roars muffled by blaring police sirens along with the confusingly blurred surrounding and your heart pounding in your mouth as you close in on the finish line, trust me, you wouldn’t really care about any critique of this game. If I were to finish this on the same note that I started on, MW2005 wouldn’t have been disappointed that his son couldn’t become what he was; Instead, he would’ve been more disappointed if he tried. Seems like Need for Speed Most Wanted 2012 turned out to be something of an illegitimate child.

I’d like to specially acknowledge my friend Hemachandra’s insights on this game and the fact that he handed the game to me. Please drop us your views on Need for speed most wanted 2012 edition.