Max Payne is back. It’s been 8 long years since we’ve seen Max fly through the air in slow motion and take down multiple baddies in one go. After a long and somewhat troubled development phase, Max Payne 3 finally saw the light of day by early June 2012. So have all the years of hard work paid off? Does Max Payne 3 live up to all the hype? Read on to find out!

Max Payne 3 represents a complete change in the series. While the previous two games were set in freezing New York; Max Payne 3 takes place mostly in sunny São Paulo, Brazil. Fans will also notice the change in style. Originally a neo-noir narrative with graphic novel panels filling in for cutscenes, Max Payne 3 instead  uses shifting cameras, film stock and overarching cuts to keep the action going. When you first fire up the game, it’s slightly annoying, but you’ll get used to it.

Taking place 8 years after Max Payne 2, Max is still unable to let go of his tumultuous past. Here we see Max as cynical and world weary as ever. The game is played as Max narrates everything in past tense. His comments and narration bring out the genius in writing, the analogies, one liners and moments of self deprecation are entertaining as hell. Max is struggling with the memories of his dead wife and daughter and has become much worse. He drowns his pain in alcohol and is still unable to let go. As mentioned earlier, most of the action takes place in São Paulo, Brazil, where Max has been recruited to be security detail for a wealthy businessman called Rodrigo Branco. Things turn sour when Rodrigo’s wife is kidnapped and Max stumbles upon a much bigger conspiracy spanning various organizations. In between this story, Max narrates how he got to Brazil in the first place and there are also a couple other flashbacks. The single player campaign is satisfyingly long and will take around 10-12 hours to complete.

Not much has changed gameplay wise. You start out with all the same abilities as you will end with. The game plays out in the third person perspective and like the previous two entrants in the series, health is non regenerating but can be restored via painkillers found around the game world. Max is able to carry 2 small guns and one large gun. He can also dual wield the handguns, but he has to drop the large gun like an M4A1. The trademark bullet time returns where Max can slow down time, jump in any direction and pump some lead into some bad guy’s skulls. Flying through the air and laying waste to a group of enemies is not only immensely satisfying with all the bullet trails visible and environmental destruction, but is quite necessary when faced with insurmountable odds. There is a limit to using bullet time, so use it wisely. You don’t want to use it for 2-3 enemies only to find 10 enemies rushing you with an empty bullet time bar.

The action is thick and fast, but one gripe I had with the game was the cutscenes. Don’t get me wrong, cutscenes are a great way to enhance the story, but Max Payne 3 sometimes takes it a bit too far. There are sequences where the room is empty and all you have to do is walk to a door to a cutscene, then to another and so on. The cutscenes are unskippable as well. One particular level involves a lot of walking and cutscenes which might frustrate some players. Not much else is new and people who’ve played the previous 2 games will find themselves right at home. 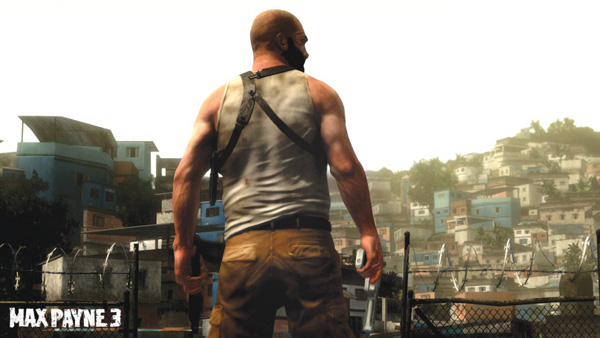 Max Payne 3 uses the Euphoria engine, the same used in Red Dead Redemption and Star Wars The Force Unleashed II. The textures and animations are fantastic on high detail levels and you can really see a lot of work has gone into character faces. Max in particular is lifelike and his expressions are well well animated. Another thing worth noticing is that clothing on Max creases and stretches according to his movements, a nice touch. Over the course of the story, the action takes place in a range of different locales and one thing is for certain, there are a lot of environments. You get to shoot stuff on a boat, in the favelas, in an office and many more places. Hardly any textures are repeated and that’s probably what contributes to the large size, around 35 GB of storage space is required.

There’s a lot of slow mo sequences where you gotta shoot a bunch of enemies while say, dropping from a top floor. It’s quite cool and the better you perform in it, the easier the ensuing firefight gets. Setpieces are large and detailed, but not entirely destructible. Compared to recent games like Battlefield 3, the environments aren’t as interactive but get the job done nonetheless. It’s got diversity going for it so you don’t get bored of the locales even though the game is quite linear. Now, the sound effects are fantastic and the score by Health ties in well into the game. A special mention to James McCaffrey who voices Max Payne, he delivers his lines with unapologetic cynicism and dry wit and really brings life to the character. You get the idea Max has been through a lot and his narrative reflects his quest for redemption and and attempt to forget his past. Bullets flying past and the general destruction are heard clearly as well and the audio is immersive. 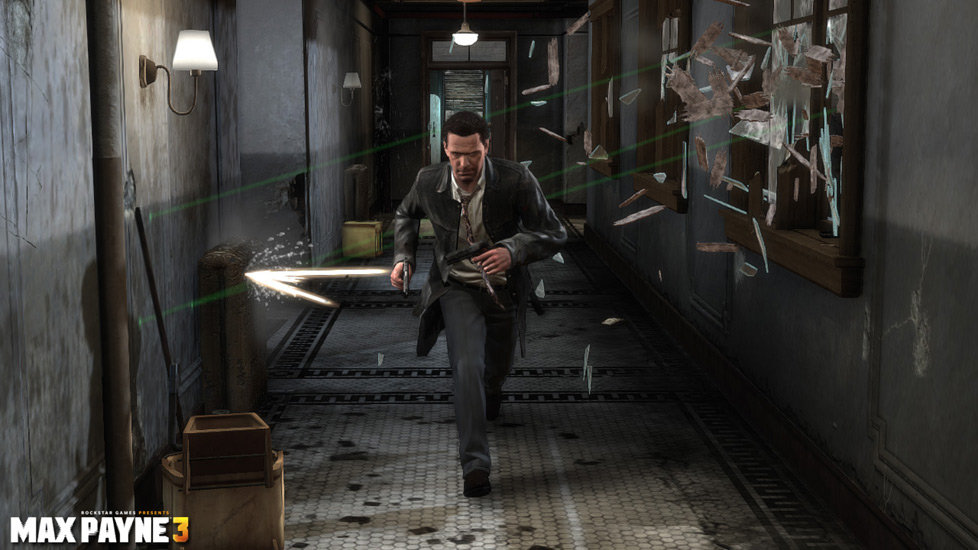 Overall, Max Payne 3 really does live up to the hype and sometimes even exceeds it. There’s very few full on action games that offer a great storyline and well and Max Payne 3 is the best of them. While the cutscenes can be jarring and sometimes take you away from the action, they really help in taking the story forward and fleshing out characters. I’d like to mention the subtitles though, lots of dialogue is in Portuguese and even with subtitles on you don’t get translations, simply a repeat of what is being said in Portuguese. So prepare to hear a lot of dialogue in a language you might not understand. The system requirements are rather hefty as well, have a look: 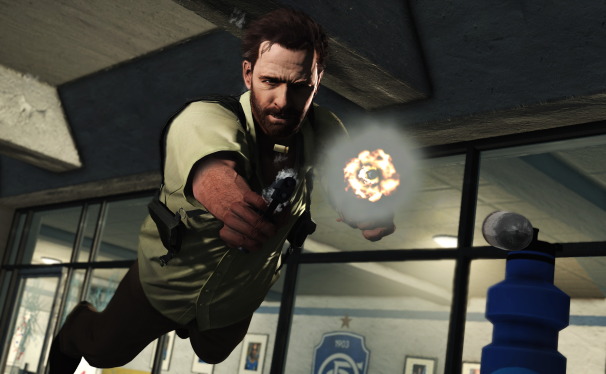 Max Payne 3 is a solid entrant to the series and the gamble Rockstar has taken by changing the style of the game has really paid off. If you enjoy action games or are a fan of the Max Payne series, go out and grab your copy now! A word to the wise though, the game is unapologetically violent, graphic and contains adult themes, images and language. Keep it away from the young ‘uns.

Please drop us your views on this Max Payne 3 Review.