iPhones have iTunes and Windows Phones can be managed via the Windows Phone app or Zune, but Android doesn’t have one official management tool. Sure there are a lot of third party management tools available out there, but not many have a comprehensive list of features. Enter Moborobo, the all in one Android smartphone management tool that lets you manage pretty much every aspect of your phone, cosmetic or not. With Android smartphones getting more powerful and spacious, there’s a need to manage everything on the device and keep it in the best working condition. Moborobo lets you do so much with your phone from your computer and best of all, it’s free! Read on for our complete Moborobo review.

Moborobo can be downloaded from here, and once installed, it doesn’t consume too much space. The list of devices supported by Moborobo is available here. Your first connection is guided by a wizard which tells you how to enable developer options on your device. This is required for Moborobo to connect to your smartphone and make changes. Once your phone is ready for connection, you can let Moborobo access it via regular USB or WiFi. The USB connection is the simpler of the two, and just requires your USB cable. WiFi connection is done through an app called Mobo Daemon which will be downloaded in the connection process. You just have to make sure that both your phone and PC/laptop are running on the same WiFi network. A code has to be matched on your PC and smartphone to facilitate the WiFi connection.

Once your smartphone is detected, some drivers will be downloaded, which shouldn’t take too long. The homescreen visible after all this is very well made and houses a lot of information. It lets you know about all the content on your phone, all the free/used space as well as phone model details. There’s also a replica of your homescreen on the left that can be minimized, and you can take screenshots as well. Since Moborobo supports the connection of multiple devices, you can switch the devices to manage from here as well. The all important file manager can also be accessed via this screen. 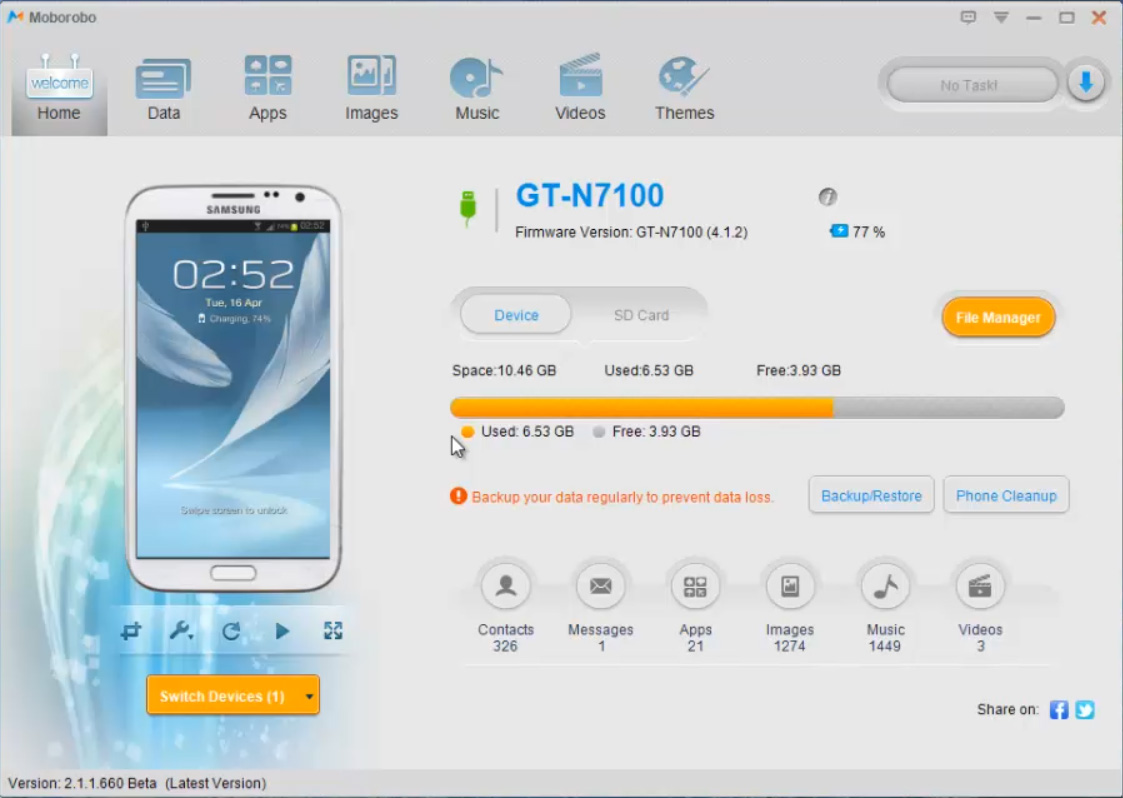 The important tools available on the main screen are Backup/Restore and Phone Cleanup. Backup/Restore allows you to backup all data on your phone including contacts, messages and the like. You can also backup your apps, but this is available only on rooted devices, which shouldn’t be attempted if you’re new to Android or smartphones. The Phone Cleanup wizard just gets rids of temporary installation files and cache, and will help only if you keep downloading and manually installing apps.

Here’s a breakdown of what each tab lets you do:

Probably one of the most important functions of Moborobo is the ability to manage contacts, messages and calls right from your PC. This includes adding, removing, editing contacts as well as backing them up. Message center is convenient because you can continue sending and receiving messages even while the phone is connected to the PC and syncing. Apart from this, you can also backup, restore and delete messages.

The apps tab is very useful, and not only lets you install/uninstall and export your apps, but also lets you move them from device memory to SD card and vice versa. From here you can also get rid of those pesky bundled apps that you don’t use, which will be usually under the System apps. But make sure that you’re careful, because if you uninstall an important system app by mistake, it could render a function or two useless or might crash the OS. Another nifty feature is the ability to update apps from your PC directly. 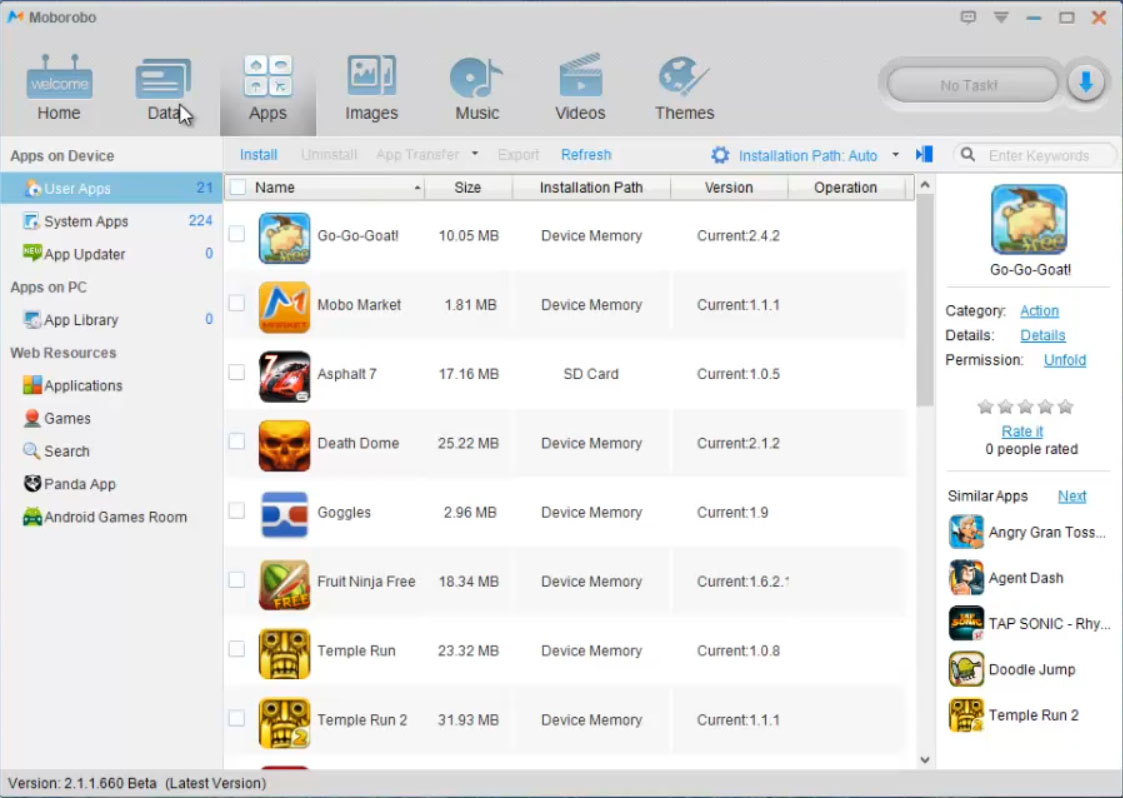 There’s also something called the Mobomarket, which is an alternative app store for your Android device and includes some apps you might not find on the Google Play Store. It also includes more app management features and has deeper integration with the main Moborobo client on PC.

It’s inevitable that your Android phone will not have music, so the music tab lets you manage your library without too much fuss. You can do the usual adding and deleting of music from here as well as view system sound files and ringtones. This includes all those little beeps your phones makes, so basically nothing is hidden.

Both these tabs offer basic functionality to work with images and videos. You can add or remove them from your phone and that’s about it regarding the files themselves. In the Images tab you can also find some web resources where you can get new wallpapers for your phone. The videos tab, on the other hand, includes the option to install an app called MoboPlayer, which is a video player and manager. 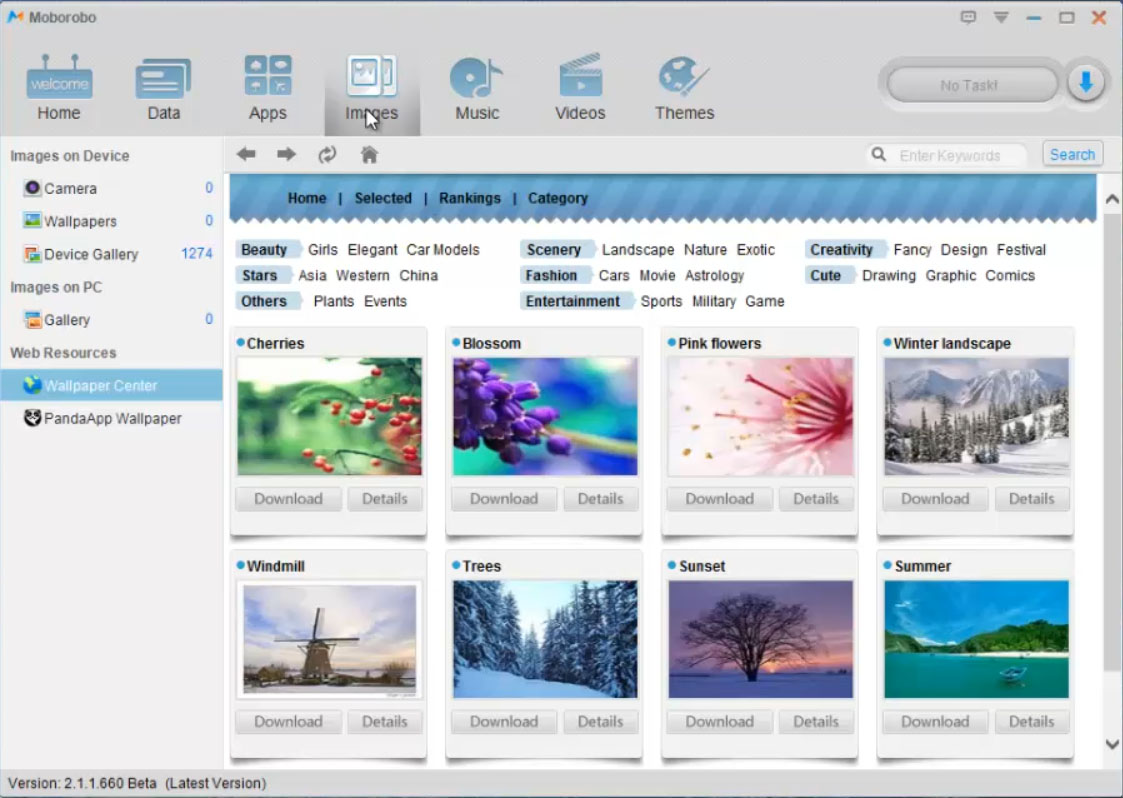 Finally, there’s the themes tab, that lets you customize your phone. But there’s a catch, there are themes only for an app called Mobo Launcher, which is basically a replacement for your default launcher. There’s quite a lot of themes available for it and if you really love customizing your phone, you will like this. For others who want to customize their phones without installing the Mobo Launcher, you’re out of luck.

Moborobo is a great tool that lets you manage and control a lot of things on your smartphone and is one of the best Android management tools. Since it covers pretty much every aspect of management and maintenance, we highly recommend it to anyone with an Android smartphone. It boasts of a large list of supported devices (many not in the list are supported as well), a clean and functional UI and has tons of features, what’s not to like?