Way back before any of the current crop of Windows Phone 8 Lumias released, there was an internal leak at Nokia that revealed the model numbers of then upcoming phones. The Lumia 920 was mentioned, but curiously there was something called the Lumia 1001 which was assumed to be the flagship. It’s common knowledge that the current flagship of the Nokia Lumia line is the 920, but lately there’s been rumors of an even more powerful phone. Though the Lumia 920 came with a PureView camera, most people thought that it would originally come with the same 41 MP sensor on the Nokia 808 PureView, the current king of camera phones.

There’s now talk of a new flagship Windows Phone 8 device from Nokia coming soon called the Nokia EOS. It may or may not be designated Lumia 1001, but one thing’s for sure, it’s got amazing specs. Slated to be the first Windows Phone 8 smartphone with a quad core processor, it could turn out to be a winner for Nokia. While the Nokia 808 PureView was praised for its camera, many were turned off by the pretty much dead Symbian Belle OS. With that sort of camera being housed in a gorgeous Lumia body, with a quad core processor, the Nokia EOS should be a drool worthy device.

The Nokia EOS is supposed to come with the Qualcomm Snapdragon 800 SoC, which will have a quad core Krait 300 processor, 2 GB of RAM and of course LTE. Even better, there’s supposed to be a MicroSD card slot for expandable storage, because hey, 32 GB won’t be enough for those huge photos. However, there have also been other rumors saying that the battery drain with that quad core processor is tremendous, so Nokia might in fact go with a dual core SoC, albeit with a newer processor architecture. Plus, there will supposedly be a FM receiver and and MicroHDMI out, so that’s pretty much everything you could want. 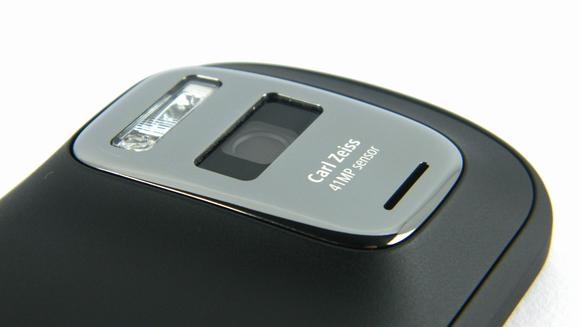 The highlight of course is the 41 MP camera, which is confirmed to make its way to the EOS with camera improvements in tow.

Probably the only spec that might disappoint some is the screen, which is rumored to be the same resolution as the Lumia 920, 1280 x 768. However, it is a AMOLED screen instead of LCD like on Nokia’s current flagship. This is mainly because Windows Phone 8 doesn’t support full HD resolutions. However, the GDR2 update for Windows Phone 8 scheduled to release sometime in Q3/Q4 2013 is going to add that support.

The Nokia EOS sure does look tantalizing, even if it doesn’t come with the quad core processor, the camera should be a major selling point. Thoughts on this development anyone?