With the heated competition between smartphone brands, amazing features and reduced prices are making their way into the market. The recent brand to launch a mid-range Andriod-powered dual-SIM smartphone is the telecom operator Idea Cellular. Already enjoying its success with the network services, Idea Cellular has launched its Android smartphone, Aurus 4. A desirable 3G device listed on the official store, at just Rs 8,999. 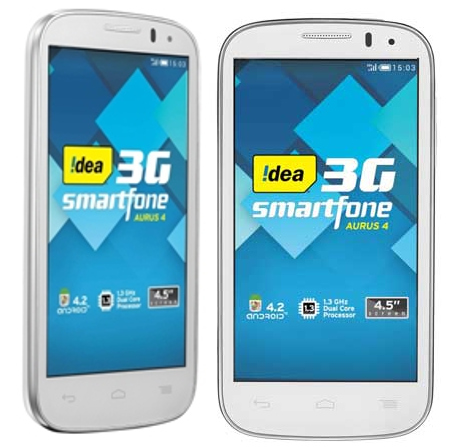 With an impressive resolution of 480×854 pixels, the 4.5-inch capacitive touch screen has a secondary VGA shooter of 0.3mega pixels, fitted neatly on the front for video calling and selfies. It has a 5-megapixel snapper as the primary camera. The new gadget from idea is powered by a 1.3GHz Dual-Core processor coupled with 512MB of RAM. The onboard storage is 4GB that can be expanded externally upto 32GB by a microSD card. The device runs on Android v4.2 (Jelly Bean) OS and offers 1,800 mAh battery, which is claimed to give 392 hours of standby time and 4 hours of talk time on 3G.

The device has a built-in Wi-Fi support for wireless internet via a hotspot and is compatible with both 2G and 3G networks. The gadget offers dual SIM card slots. The other features include Bluetooth, Wi-Fi (802.11 b/g/n), and GPS amongst others. The phone will appeal users who desire a feature rich phone at affordable prices. Designed for the savvy youth of India with a giant appetite for content on smartphones, the idea Aurus 4 is packed with high-end features.

The product is available in the company’s own retail and service outlets all across major 3G markets in India. Especially Gujarat, Maharashtra, Chhattisgarh, Kerala, Madhya Pradesh, Uttar Pradesh (west and East), Goa, Andhra Pradesh, Haryana, Himachal Pradesh, Jammu and Kashmir. Selling over six lakh devices of the recently launched five-inch Ultra, Idea Cellular is all set to taste success with the Aurus 4. Idea has an incredible number of 128 million subscribers in India.