Just recently, Micromax, the largest Indian phone maker announced their first two Windows Phone devices, the Canvas Win W121 and Canvas Win W092. Aimed squarely at the budget market, these two devices are pretty much tailor made for a budget conscious market like India. In fact, the Canvas Win W092 is the cheapest Windows Phone you can get! As previously mentioned, XOLO’s new Windows Phone device has now been revealed, making it the second of three Indian manufacturers which will manufacture Windows Phones. While the Micromax Canvas W092 has the honor of being the most affordable Windows Phone out there, the XOLO Win Q900S is the lightest Windows Phone, and the lightest smartphone in the world! Weighing in at just a 100g, this lightweight device still manages to pack in a decent punch. Here’s more about it! 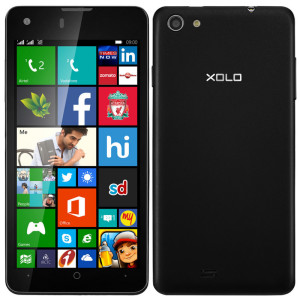 Even though it’s super light, the XOLO Win Q900S has a pretty large screen, and that tooHD resolution! Camera lovers will be happy to know that there’s an 8MP snapper on the back with LED flash as well as a 2MP front facing camera. Like the Lumia 630/635, there’s no hardware capacitive keys on the front, there’s optional expandable storage too! It had gone up for preorder exclusively on Snapdeal for Rs. 9999, and is now sold out, the lucky few were able to grab it at a lower price. When the phone comes back in stock, it will retail for Rs. 11,999. Going head to head with the Moto G at this price point definitely isn’t an easy task, but the XOLO Win Q900S doeshave its advantages! It should be available by the second week of July. Here’s the full specsheet: