Asus has really been taking hybrid devices quite seriously, and is among the first companies to release truly convertible and innovative devices. One of them was the Asus Taichi, an ultrabook slash tablet that included two screens and another was the PadFone 2, a tablet slash smartphone. At Computex this year, they announced another hybrid device completely unique from others, that runs Windows 8 and Android! Read on for more on the Asus Transformer Book Trio.

Must read: Laptops vs Netbooks vs Ultrabooks – What’s the main difference? 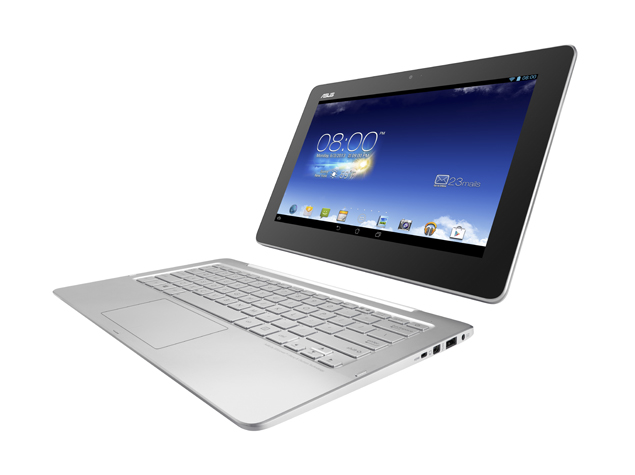 The Asus Transformer Book Trio looks like an ultrabook with a detachable screen that runs both Windows 8 and Android. How does this work you ask? By using dual hardware setups. The Windows portion of the device uses separate hardware and can be run only when it’s docked to the keyboard, since it requires more power. The Android portion, however, can be run in both docked and tablet mode, which can be toggled using a special hotkey. So when docked and running Windows 8, the hardware you will be using is as follows:

Unfortunately there aren’t any more details on RAM and graphics card, but what we do know is that the keyboard dock part with the above specs will be plenty fast. On the tablet side of things, the hardware is as follows:

The tablet/laptop screen is a 11.6 inch 1080P LCD IPS panel, which should satisfy pretty much any techie. Battery life has been advertised as 15 hours, but not made clear in what mode. Considering the new Haswell chips are meant to increase battery life, we think that even the laptop mode should provide great battery life.

Now here’s the best part, it can be used as 3 independent devices. Firstly, when detached it can be used as an Android tablet. Secondly, when docked it can be used as a laptop powered by the new Haswell processor and thirdly, the keyboard dock can be attached to another screen to power a desktop like experience. So in essence, you can actually use the tablet part separately while the dock powers another workstation. The transition between devices is claimed to be seamless, and if it really works as Asus says it does, we could have the first truly hybrid device. No pricing or release details have been announced yet, but it probably won’t come cheap. So what do you think of this exciting new device? Will it open up new horizons for mobile computing or is it just a needless gimmick? Drop us a line and let us know what you think about the Asus Transformer Book Trio!