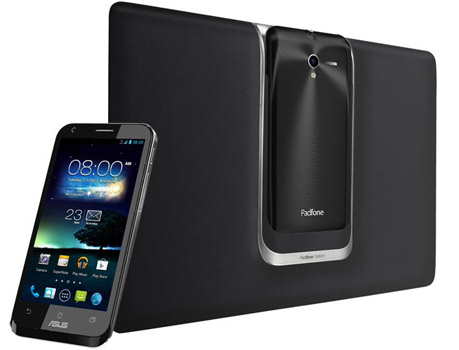 The Asus Padfone 2 features cutting edge hardware that is sure to impress any tech aficionado. All this power is required too, since it powers a full size tablet. The tablet part of it is mainly a dock with extra juice, so all the work is being done by the phone part. Featuring a processor based on the new ARM Cortex A15 architecture, the Padfone 2 is touted to be at least 30% faster than its predecessor in all areas. Asus has also worked hard to keep the phone sleek and slim, it weighs in at just 135 gm and is just 9 mm thick. Here’s the complete Asus Padfone 2 specs:

The main feature here, is of course the ability for the Padfone 2 to be docked and used as a full featured tablet. The added bonus is that once it’s docked, the extra battery pack allows for much longer usage. There’s also native apps that allow for handwriting recognition, language translation and more. Asus has also improved its proprietary SonicMaster sound technology and has promised much better sound quality. The camera is another strong suit, the rear facing shooter is capable of 30 FPS 1080P video recording, and the front one is capable of full 60 FPS 720P video recording, which is a first. Turning the Padfone 2 into a tablet is simply a matter of  sliding the phone into the tablet dock slot, which comes with a 10.1 inch screen.

Initial pricing details for the complete combo of phone + dock (32 GB) suggest something around the $1000 mark. Higher storage variants will inevitably cost you even more dearly. Interestingly, most countries in Asia (India, Japan, Taiwan, UAE, Singapore, Thailand etc.) and Europe (Germany, Finland, Hungary, Italy, Denmark etc.) are supposed to see the Padfone 2 in stores by the end of December, but no US dates have been announced yet.

So what do you think of the Asus Padfone 2 specs and features? Is it worth the steep price? Drop us a comment and let us know!