They say, you need to keep reinventing yourself to stay relevant and have to take risks to survive in a cutthroat market. Microsoft did just that by introducing Windows 8, a completely different operating system that changed a lot of things that people were used to since decades. Unfortunately, people weren’t as open to change as expected, and Windows 8 was met with a rather lukewarm response. Chief complaints included the new Modern UI, lack of a Start button, apps and pretty much everything new. So Microsoft heard a lot of these complaints and has finally launched Windows 8.1, a free update to Windows 8. Read on to find out more about what’s changed and what we think about it!

In earlier terms, Windows 8.1 would have been called Windows 8 Service Pack 1 or something similar. It’s not a huge overhaul, but it isn’t an incremental update either. This means that if you loved or hated the general look and feel of it earlier, there’s not much here to sway your opinion completely. However, some of the new changes might just tip the scales in its favor. Since it’s an update, the system requirements remain the same, so you won’t need to get any new hardware unless Windows 8 isn’t performing well. Here’s the list of system requirements:

You should be able to see the Windows 8.1 update through the Windows Store, if you’re having difficulty finding it, simply follow this link.

The first thing you’d notice once you boot up into the Windows 8.1 desktop is the Start button. Yes, the much loved Start button is making a return, but before you get all jumpy, it’s not the Start button of yore, it’s just a button that lets you go to the good ol’ Modern UI Start Screen. While Microsoft’s vision of the future wasn’t all that well received, we think that it’s still a great choice, specially for touchscreens. The live tiles remain the same, all colorful and interactive. However, this time around, there’s double wide and small tile options as well, much like Windows Phone. There’s subtle changes to be found though. First of all, and our favorite, are the new Start screen background options, with multiple color options that can be individually personalized and the new animated backgrounds. So now when you scroll around the Start screen, there’s subtle animations. It’s not intrusive, but manages to be pleasing to the eye. Oh, you can also set your current wallpaper as the Start screen background, so it seems that the live tiles are a part of the desktop instead of a different environment. 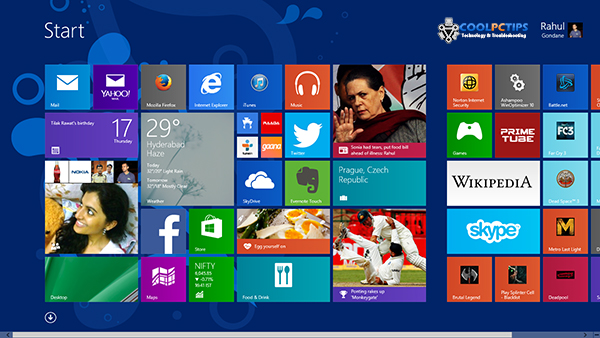 User friendliness wise there’s a couple of changes as well, you can now group up tiles and name them, as well as move/remove/pin/unpin them as a group. One of the small yet probably very important changes is the new ability to boot directly to desktop instead of the Start screen, something users have been clamoring for since almost a year. All installed apps and programs can now be accessed by swiping down, and apps can now be sorted by Name, Date Installed, Most Used and Category. If you really want to get rid of them, you can also disable Hot Corners. These are some small but very welcome changes that will help ease the process of moving to the new Modern UI.

Having loads of apps is fine and dandy, but what use would that be if they can’t be used in tandem? That’s exactly the question a lot of people asked earlier. You can now use upto 4 apps together at once, but the best part is that the screen split is decided intelligently. For example, if you open a photo app and a text based app, the photo app is automatically given more real estate by default. You can edit it, of course, but it’s a nice touch. With multiscreen support, multitasking with apps only becomes easier and more productive, as expected. 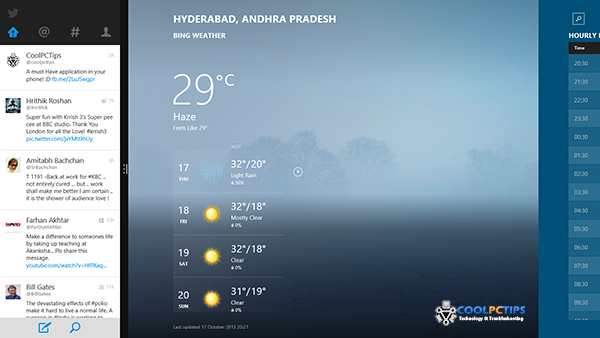 Search has always been something of an overlooked feature in every previous iteration of Windows, but not anymore. Microsoft has deeply integrate Bing Search into Windows 8.1, and it ties up the local search with internet search and apps seamlessly to find the best results possible. For example, if you search for Michael Jackson, it shows you results from your PC, say songs in your library, and information from the internet, which includes pictures, videos, bio and much more. Plus, even installed apps are in on the action, so if you click on the bio, it will take you to the Wikipedia app, or if you click on songs, it will take you to the Xbox Music app. Considering everything is moving towards a unified experience, this is definitely a step in the right direction.

With Windows 8.1, the App Store gets a complete overhaul, with a newer, more attractive UI, categorically arranged apps and personalized recommendations. But as always, the smallest changes are the most significant, and there are two changes here worth noting. First, is that apps are now automatically updated, you won’t ever see the number notification on the Store live tile. Second, is that newly installed apps won’t be automatically pinned to the Start screen, just like Windows Phone. Ratings and reviews are much more fleshed out on the app pages as well, so is the actual app information. 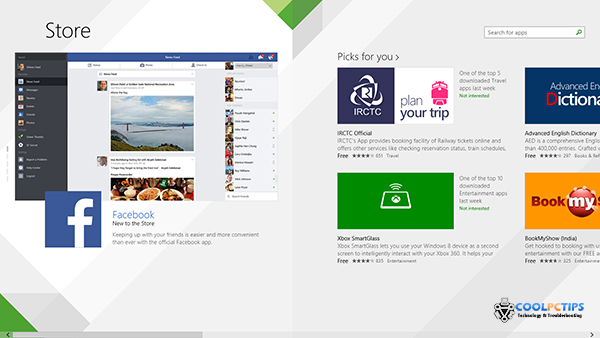 Another big change you’d notice when you log into Windows 8.1 for the first time is the lack of the Messaging app. Skype is now preinstalled on Windows 8.1, and replaces the old Messenger app. There’s also a couple new preinstalled apps, called Bing Food & Drink, and Bing Health & Fitness, which are pretty self explanatory. All of the existing apps have also been overhauled, including the Photos, Music, Mail, People and Camera apps. They now boast of far more features and are far more usable than they were earlier. The People and Mail apps in particular are much better looking and user friendly now, thanks to a complete redesign.

SkyDrive has always been a big player in Microsoft’s arsenal, but it wasn’t given as much importance on the desktop operating systems as it should have been. In Windows 8.1, SkyDrive is much more tightly integrated, and now feels like a real part of your computer. It now appears as a folder on the Computer, which can be set to sync individually or completely, as well as made available offline. So you can now sync all your stuff online, and when you login to another Windows 8.1 PC, everything you need is already there. It’s a very handy feature for people with multiple computers or tablets. 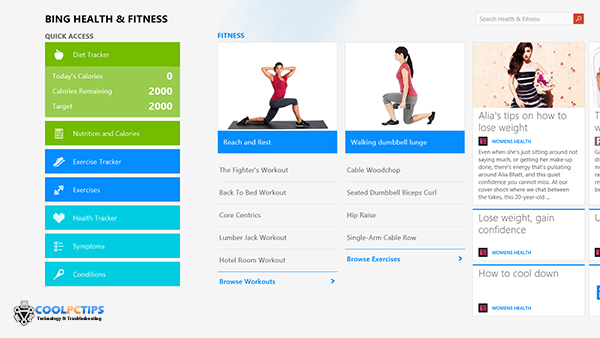 Speaking of the cloud, Internet Explorer 11 comes bundled, and makes use of the cloud sync feature. Unlimited tabs can now be opened and synced across computers and tablets, with future support for Windows Phone 8 predicted as well. Performance wise it’s much more faster, stable and secure than before and can really stand toe to toe with pretty much any other browser out there. Perhaps its only disadvantage is the lack of addons/plugins. Still, it really doesn’t deserve all the ridicule it gets from all quarters of the internet.

So basically, Windows 8.1 is an evolution of Windows 8. It does not reinvent the wheel, but rather tries to perfect it. Should you get it? Definitely, if you’re already running Windows 8, it’s just free update, so there’s no reason not to. It’s also available as a standalone package, so if you’re getting a new PC, this is the way to go. It’s hardly been a year and Microsoft has already attempted to address a lot of user concerns, without compromising too much on their vision of the future hybrid PC, so like it or not, Modern UI is here to stay.

The new additions, changes and app overhauls definitely make Windows 8.1 better to use than Windows 8, and there isn’t anything we really miss from the previous version, so whatever hass changed, it has changed for the better. With Microsoft rumored to merge Windows Phone and Desktop Windows sometime in 2014, we can only expect tighter integration and a unified experiences, glimpses of which are already visible in Windows 8.1. A promising future is ahead, perhaps?