Windows 8 is finally here. Microsoft’s new operating system is completely different from all previous versions of Windows. The UI is new, it’s much faster and more secure as well. This is pretty much Microsoft’s riskiest move till date, it’s changing the whole image of itself and Windows 8 is at the forefront of this evolution. But is it worth a buy? Would Windows 7 or older users consider changing to Windows 8? We tell you everything you need to know in our complete Windows 8 review!

First and foremost, even though Windows 8 is superior in performance to Windows 7 and has this general zippiness, system requirements are pretty much the same. This is good news for owners of older computers, there’s no need to upgrade, although like always it’s recommended. Still, even on the exact same hardware you’d notice that it’s much faster. This is also the first time Windows has the ability to run on ARM based processors, although that’s Windows 8 RT. Here’s the system requirements:

The installation process is pretty quick and you’ll be at the new start menu in no time. More on the new UI in a bit. Now signing in is done via Microsoft Account, an account that ties all social networks, mail accounts and such into one so that when you log into your computer, all your information is already there. This also helps in case you want to log into another computer somewhere else, all your settings are saved and synced. There’s also an option for a local account, but there’s hardly any integration there so we recommend using the Microsoft Account. 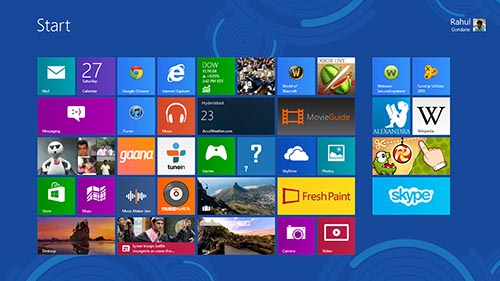 Let’s not mince words here, the new UI is something you’re going to either love or hate. It’s funky, colorful, functional and much more personalized. Love it or hate it, by default your PC boots into the new start menu. There’s the desktop and Windows Explorer (now called File Explorer) available as well of course, you have to either click on the “Desktop” tile or right click the bottom leftmost corner of the screen. The mainstay of all Windows PC’s, the “Start” button is now gone. Instead, you can access most settings by right clicking the bottom left of the screen as mentioned. Another bunch of settings can be accessed by moving the mouse pointer to either corner of the right side of the screen. Open apps/programs can be viewed and closed by moving the pointer to the top left corner of the screen.

Sound confusing? It is. Initially it’s going to be pretty difficult to get used to, but once you’ve got the hang of it, you won’t miss the old interface. Admittedly, this change can be jarring since everyone’s used to pretty much the same interface since decades. Once you’re into the desktop mode or Windows Explorer you’ll notice that not much has changed, but it’s much easier to use thanks to the ribbon interface a la Office 2010. All file settings, views and such are accessed via a ribbon menu on the top that can be dropped down and file details have been moved to the right side. Gone is the Aero Glass effect as well, all windows now have this minimalistic matte type finish which we like.

The whole user interface takes a few cues from Windows Phone, and there’s a lot of swiping and smooth transitions that look slick. Also like mobile operating systems, apps keep running in the background unless you close them via the redesigned Modern taskbar (pointer to top left of screen). The extra bit of personalization that you get to see after all your accounts are synced is really something to behold. Live tiles constantly keep updating information, so you know everything without even opening the app. For example, the Mail app shows if you’ve got unread mails, the People app shows notifications from social networks or just a collage of pictures of your contacts and the Pictures app shows pictures on your Facebook account or SkyDrive. Other apps like News, Travel, Music and Bing also update in real time and you’re always getting the latest news or just a bunch of stuff to look at. The Start menu background and colors can be customized as well, and so can the logon screen. You can set up notifications you’d like to see on the logon screen too! Settings and search can be accessed by right clicking in apps or the Modern interface, speaking of which, the Search function performs a search within the app or Start menu so you find what you’re looking for. Overall, a fantastic interface that looks good and performs even better. 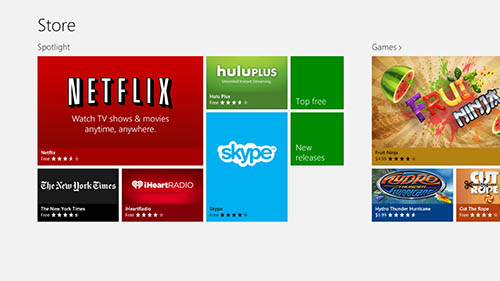 A new addition is the Windows Store, which lets you download apps, just like a mobile phone. There’s no installation and they’re usually super light and functional. Sure, the app store is barren compared to the number of Android or iOS apps available, but most of the stuff you’d need is there. You can download app versions of software like TeamViewer, Google Chrome and such which let you do most day to day things, but it’s better to use the full desktop versions of the same for the heavy duty stuff. A good example is Internet Explorer 10 bundled with Windows 8, you’ll find flash support only on the full fledged desktop version. The Music app is extremely cool and once your music library is synced, you can view artist bio, discography and pictures that automatically appear when songs are played. The Travel app has information about a lot of cities around the world and ticket booking, hotel reservations, places to visit are all integrated. You can also view photos and 360 degrees panoramas. The News app brings the headlines via Bing to your Start menu and you can view the news you are interested in like Entertainment news, Technology news etc.

There’s a lot of fun apps available too, including games like Fruit Ninja and Cut the Rope. Microsoft’s new Skype app is also sleek and functional. You can find photo apps, business apps, note apps, music apps and much more. The ecosystem is small as of now, but it’s sure to grow. The integration of some apps like the Messaging app is a boon and lets you communicate with everyone without even logging into to social networks like Facebook or Twitter. You can carry on chatting without opening up a web browser and messages sent to you are immediately notified even while you’re doing something else. For some tasks you might have to switch between the Modern interface and the usual desktop mode, it can be annoying sometimes. But apps are a great way to perform simple functions like sending mails, reading the news or catching up with friends without using programs. 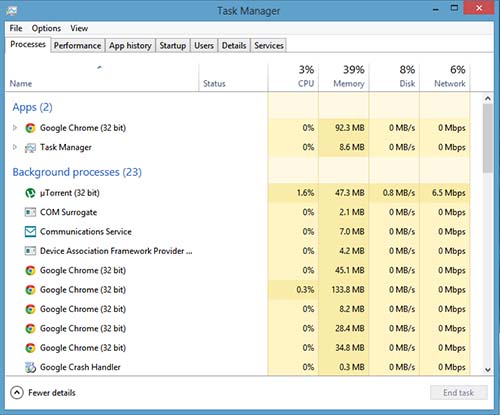 A lot of the graphical whiz bang is now hardware powered. So you’re looking at smooth transitions, better colors and text that’s actually hardware rendered. All of this results in a much snappier looking interface. Visual flourishes aside, the operating system as a whole does tasks faster than its predecessors. Microsoft has come good on its promise of faster boot, and boot times are in the area of 15-20 seconds while earlier they were around 40 seconds. It’s an impressive feat and makes you feel as if your hardware got a second life. Performance across the board is much better and we’re pretty happy about it.

Windows 8 now has the option to run from USB drive, so you’ve got an operation system on the go. System developers and technicians will welcome this feature. Now, if you’ve somehow screwed up your computer, Windows 8 offers the option to Refresh or Reset itself. Refresh changes some settings to default and Reset is basically like a system restore and would fix most problems. If you want to restore just a certain file or folder, you can do so through the File History option in the Control Panel, which is a nice touch. Finally, there’s the new and updated Task Manager that gets rid of all the useless stuff, it now shows descriptions and individual component usage so you know exactly what’s eating up your resources. No more obscure filenames and such. There’s also a Performance tab that collates information about CPU, Memory, Network and Disk usage. The startup programs list also displays here along with Users logged in and how much resources they’re using. In case you want details, there’s also a tab with details of all processes and services running.

Windows 8 is a bold step forward by Microsoft, rarely have we seen companies completely reinvent themselves and their portfolio. While the drastic change might be jarring to some, we welcome it. Sales might not be all that because of initial apprehensions, but once the word gets out Windows 8 should really pick up. That’s not something to argue about in any case, since this is pretty much the future of Windows and one has to get used to it. Once you’re into it, you might never turn back, the ease of use and information at your fingertips (literally, in case of touch based devices) are hard to do without now that I’m used to Windows 8. The funny thing is, if this was a completely new product it would receive much less flak than it is now, it’s just the change that people are not able to stomach. It’s good to see another ecosystem pop up, that includes all Microsoft devices like Windows 8 computers, Windows Phone 8 devices and Xbox as well. You can read more about Windows 8 editions here.

According to us, Windows 8 is a winner. Sure it’s going to take time getting used to, and there are some shortcomings like the paltry number of apps and the confusion regarding UI, but the bottom line is that Windows 8 improves upon the desktop experience and integrates a lot of other devices into it while looking fresh. It’s got incredible personality and won’t disappoint.