Microsoft seriously warned people to switch windows XP as soon as possible or else they wont give any support or proper updates when required. After more than ten long years of success of Windows XP, Microsoft has decided to throw in the towel for the still existent users of Windows XP as it’s making a final attempt to persuade the users to give up on the old OS. It’s no surprise that Windows XP served and satisfied millions of users well, but Stephen L Rose- The worldwide community and social media manager posted on the Microsoft Blog saying ” Wouldn’t it be great if the glory days lasted forever? “, Reality is that, the trophies get dusty, records are broken, and what it took to be best 10 years ago isn’t just good enough today. So it has been a must now for all of us to switch windows xp asap (as soon as possible) . 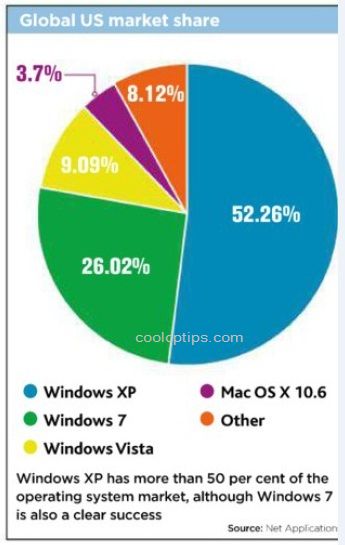 Rose gave two reasons why to upgrade the OS

1) Extended support for Windows XP is running out in less that 1000 days.

2) There’s an OS out there that’s better that XP.

1000 days is all what they got and that’s the deadline for them to give up their OS as Microsoft is no longer willing to lend a helping hand and the users are going to on their own if they soon don’t make up their mind in changing their OS.  The cut off date is April 8th 2014. In about 950 days Microsoft will no longer provide updates or provide security fixes, making XP vulnerable  to new threats. Microsoft said this in a demanding voice and wanted to hammer this message down to all its users as Microsoft Xp still has over 52 percent of the OS market. That’s a huge number.

Windows 7 has 26 percent and Vista on 7 percent. The company’s countdown clock shows how long the support for XP users is valid. I personally think that by doing this, Microsoft is actually trying to promote the new upcoming OS -Windows 8. If users of XP and Vista do shift from their OS to Windows 8, that’s 59 percent of the OS market they are gonna sell to the new users, Bill Gates would be the richest man once again ( Just a cheesy comment). Anyway, get your own countdown gadget from the Microsoft’s website. It, however, leaks memory. A lot of memory,about 1kb/second. Noting that it’s running all the time, and not important, this is rather inconvenient.

Fine We Switch Windows XP, Then What about Vista ?

Microsoft is also trying to persuade the Vista users too because of the security glitches and bad compatibility as compared to other OS. They even declared that Vista Sp1 will no longer be supported from 12th July 2011. However Sp2 is perfectly working fine and they haven’t announced the end of SP2’s support. So anyway, windows XP users and Vista users have got 2 more years in their hand and there is no reason for you to give up your OS just yet.

Today’s Countdown day for windows XP end of support is 924 days (i.e) and There is a Gadget for windows 7 to let you know when exactly the windows XP services will be stopped. You can download the gadget directly  : Microsoft Windows XP EOS Countdown Timer Make your last days with your OS memorable. I hope you all will switch windows XP with windows 7 or windows 8 soon.