After a very long wait, people have finally got a chance to book their Aakash Tab Online. People were very happy to know that after 3 months time they finally got a chance to order their favorite tab. It was very exciting when it was announced that the tab will be delivered in a week’s time from the day of order. This statement made people to over excite and book the tabs in minutes. But the sad news came up very slowly saying that the Datawind company aka Aakash team will deliver the tablet from January 2012, which is next year. Is Datawind aka Aakash manufactures testing the patience of people? Well, to be frank, Datawind Company should only make solid statements when they are really ready to hit the market. This is the opinion of people if you read our previous comments on aakash tablet, which are mentioned below the post.

It’s not a joke to make people to wait for so long and never responding on any queries and showing no care towards people. Coolpctips has written around 5 articles on Aakash tablet and each of the articles got around 150+ comments where people were very eager to know what will happen next. People are really ignored by the Data Wind team to take the minimum responsibility of responding to people’s queries. There is no forum for discussion and no proper meeting point related to Aakash tablet from the manufactures or from the government to help students. Most of the people who are facing a lot of problems booking this tablet are teenagers. Is govt. and Datawind Company really concerned about people? If so, they should respond to people queries or at least reply to their mails. 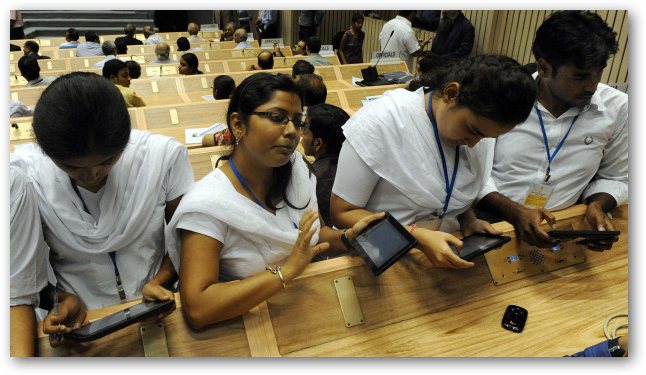 This December 15th 2011 the official Aakash website has opened the registrations to order the tab and in just 4days, all the tabs have been booked. The team has announced that the tab will be delivered within a week from the booking date, which never happened. Aakash tablet has been a dream to every school and college going student to own one. But the data wind company has released just 30,000 tabs which have to be booked only through online. When the tablet was released 2 months ago, it was promised that every student will get this tab and has to book only from their respected schools and colleges. Later on it was shifted to online booking where most of the people have booked more than 5 tabs at a time to black market them.

Any news or updates related to Aakash tablet is creating a tsunami in internet now. People are really holding up their nerves to hear the official statement of Datawind Company to declare further updates on Aakash tablet. I don’t know how famous the Aakash tab will be, but certainly Aakash tablet has got a very bad reputation of customer care services. If this is the case, people would suffer a lot to exchange their tabs when they got any technical issue with it. This has to be kept in mind by the data wind company that, they should respond to people. At-least for people who have bought them or kept a order to get this very soon.

And now coming to Ubislate 7, it has been said that the tablet will be released in the month of January 2012 to take orders. And the delivery will be from February 2012. But by seeing the team response and negligence of Aakash tablet, it’s obvious to believe that even this tab will be late and can be expected to reach customers by the end of March or April 2012. The only thing which we can do is to wait patiently for another 1month to get this tab in your hands. Please share your opinions on this Aakash Delivery Date Extended article, so that the official team might respond on this.