Everyone probably knows what USB stands for, universal serial bus. It’s one of those abbreviations that’s so commonplace, its become part of our daily life. Like the name implies, USB is truly universal. It is one of the most versatile communication protocols in the world today. Encompassing devices of all shapes and sizes, USB connectors are found on computers, televisions, photo frames and whatnot! Originally started as an attempt to facilitate easier connections between devices and computers, it has now become the standard connection interface. Now, when you go out to get yourself a new device, lets say an external hard drive, you’ve probably come across a few that boast of “USB 3.0 support”. Also, these devices are slightly more expensive. So what’s it all about?

The tech world has a penchant for adding larger numbers to software and hardware alike, and often, it’s hardly a change. But that’s not the case this time around, USB 3.0 is quite an improvement over its predecessor. Although introduced back in 2008, USB 3.0 devices and capable computers have started breaching the mainstream market only in the recent past. It’s hardly been long since USB 3.0 devices don’t burn large holes in your pocket. 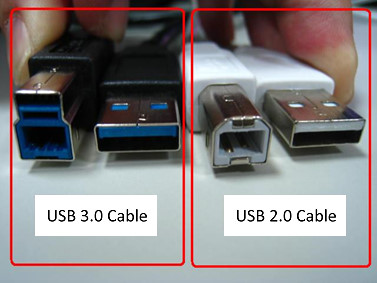 Back in 1996, USB 1.0 was introduced with a max. data transfer rate of 12Megabit/s. It had quite a few limitations and didn’t really catch on. Almost 2 years later in August 1998, USB 1.1 was introduced. It fixed some limitations of connectivity and made the protocol more practical. This was the earliest version of USB that caught on. Devices and computers started using it and the then widely used serial ports began to see a decline.

Again 2 years later, in 2000 USB 2.0 was released. It is still used today is one of the rare instances where technology doesn’t change for quite some time. So USB 2.0 brought with it a host of new features. The main one was of course, speed. USB 2.0 is capable of data transfer of 480 Mbits/sec or 60MB/sec. That meant it was almost 10 times faster than the previous version! It was thus dubbed “Hi-Speed”. USB 2.0 devices and computers flooded the market pretty soon and they became the standard connection protocol pretty soon. Until 2006, USB 2.0 was tweaked internally for more efficient power usage and other enhancements were made. Also, form factors and new connectors were added. In December 2006, one of the most important features used today was added. The feature was USB On-The-Go. This allowed USB devices to communicate with each other without requiring a full time host. To make it clearer, know how USB drives can be connected to tablet PC’s, PDA’s or other such devices? This is made possible because of USB On-The-Go. 2007 saw another very useful feature being intoduced, USB charging. Now devices could draw power and still transfer data effectively. In the years after, USB 2.0 was improved to consume less power and have in idle mode where they didn’t draw power. The last revision/upgrade to USB 2.0 was back in 2010.

In 2008, USB 3.0 was released. It was capable of data transfers upto 5Gbits/sec or 625MB/sec, was more power efficient and is backwards compatible with USB 2.0. USB 3.0 was termed as “SuperSpeed”. USB 3.0 ports look quite similar to USB 2.0 ports, but feature 9 pins instead of 4 found in 2.0. USB 3.0 operates in full-duplex mode, unlike USB 2.0 (half-duplex). This means, data upload and download can take place simultaneously without slowdown. When initially introduced, USB 3.0 didn’t see much mainstream support and industry biggies like Intel and Apple didn’t start USB 3.0 support until 2011. This significantly increased market adoption time. Most conglomerates decided to wait for data communication protocols like SATA 3.0, PCIe 3.0 and USB 3.0 to mature before extending their support. Even now, there are some driver problems and Windows 7 doesn’t natively support USB 3.0. But Windows 8 is slated to fully support USB 3.0.

Now, its rather well known that what you see is not always what you get. Case in point here is the USB interface. Although USB 2.0 claimed data transfer speeds of 60MB/s, practically you can get speeds of upto 40MB/s, even on computers with all the bells and whistles. USB 3.0 is capable of upto 625MB/s transfers, but in the real world, you’ll be lucky to see anything in excess of 300MB/s or so. This is mainly the fault of compatibility with the OS. Most drivers are still faulty and the full potential of USB 3.0 hasn’t been unlocked yet. So is it worth putting some extra moolah to get USB 3.0 capable controllers or devices? It probably is, according to us. You won’t be spending a truckload of money, yet you will have the advantages of speed and efficiency.  Getting a new computer? Make sure you get a motherboard capable of handling USB 3.0. If you’re not getting a new computer and still want to jump on the USB 3.0 bandwagon, get yourself a USB 3.0 external card that attaches to a PCIe slot on your motherboard and provides USB 3.0 ports. These cards come for around 50$ or so. Sure, the world isn’t switching to USB 3.0 this very moment, but it doesn’t hurt to be future proof, would it? Do you think it’s worth the upgrade? Drop us a line and let us know what you think about this USB 2.0 vs USB 3.0 post.