Datawind came up with two new tablets UbiSlate 7+ and UbiSlate 7C. Datawind has already bagged the contract of  supplying low cost tablet ‘Aakash’ with the Indian Government.. Now, Datawind has launched two new tablets within the price range of Rs: 3000-4000. These tablets are still considered to be the amongst the cheapest tablets in the market. The two tablets were dubbed as UbiSlate 7+ and UbiSlate 7C which have a 7-inch display with 800 x 480 pixels resolution, 256MB RAM, powered by Cortex A8 800 MHz processor, Wi-Fi, GPRS. These two tablets come with a 3200 mAh battery to give 180 minutes of continuous usage time. and are powered by Android Gingerbread 2.3.

The only major difference between these two new datawind tablets is UbiSlate 7+ comes with a 2GB of Internal memory and comes with a resistive touchscreen. Where as UbiSlate 7C has 4GB of internal memory and comes with a capacitive touchscreen. Both UbiSlate 7+ and UbiSlate 7C  features Wi-Fi and GPRS with SIM and phone capability. The both tablets will come pre-loaded with Yahoo services due to a partnership with Yahoo India. Datawind has also teamed up with Indian carrier Aircel, where Aircel will offer UbiSlate owners a 2GB of GPRS data for just Rs: 100 per month. These both new datawind tablets will support using of 3G dongles in your tablet if you want to access faster internet speed. 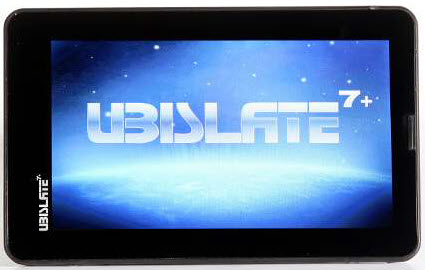 Datawind has not cleared if the tablets will be provided an access to Google Play Store (Google Android Market). It would be really interesting to watch when exactly Datawind wants to release these two tablets in Indian market. Specially in the present worst case of not delivering 30 lakh aakash tablets in time. Datawind has already accepted that they are 2 weeks behind the Aakash exact delivery date. It would be really a prestige issue for Datawind to keep their promise for delivering Aakash tablet to atleast some important regions of India by May 2012. 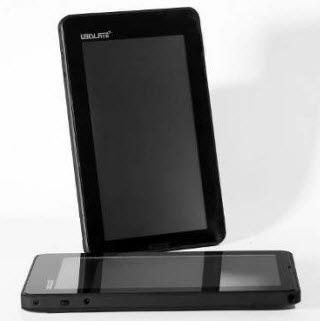 Also its very obvious to know the fact that, UbiSlate 7+ and UbiSlate 7C are not been designed with quality or performance oriented. Instead these products rely on their low price tag in order to sell more in number. Most of the Indian customers are looking to purchase an Android tablet with not much fancy specs. So UbiSlate 7+ and UbiSlate 7C would be a good choice to launch in Indian market, before everyone forgets about the existence of Datawind or Aakash project. Including Micro USB and USB port are always there. So for any normal user in India, who want to put their hands on Android operating system can own these tablets.

Datawind, had already been into problems with their previous partners Quad Electronics (Hyderabad). The company claimed that it has already done 30 lakh booking for the new tablets to be launched in the market. Datawind CEO, Mr.Suneet Singh Tuli said “We will first deliver pre-bookings, which are over 30 lakh”. Mr.Tuli did not agree with the perception of tablet market growing in India. He said, “We are getting around 8,000 orders a day…” Mr.Tuli also said that Datawind will provide the upgraded Aakash to the government for approval. After the approval, Datawind will then deliver the one lakh tablets. And we already know Mr.Kapil Sibal, (Telecom Minister) had recently said that the upgraded version would be available in May.

Well, lets hope for the best.  Hope Datawind keeps their word of delivering Aakash tablets by the end of 2012 atleast. People are looking to put their hands on previously booked tablets, rather than buying these new Datawind tablets Ubislate 7+ & 7C.