iXA Tablet is another new tablet which got the attention of cheap android tablet. Looks like the heat for cheap android tablets in India is getting more faster now. Kobian, which a leading player in computer peripherals and tablets has announced its iXA Tab on 10th May 2012. This tablet is specially designed for the students, whose interest on tablets is increasing day by day. Also by keeping the  masses in general, this tablet was tagged at a price range of just Rs: 3,999. iXA Tablet will directly compete with Datawind’s UbiSlate 7C tablet, which was announced recently. iXA Tablet when compared to UbiSlate 7C has the same price tag.

With this tablet, you can surf the web, access to one’s email, view videos, listen to music, play games, read e-books and much more. Bookings for iXA Tablet will start from May 23rd 2012 for a price of INR 3,999. This ultra thin tablet is preloaded with Android 2.3 and weighs 341gm. It has a resistive touchscreen and is powered with 1GHz core processor. Also comes with 512MB RAM and 4GB internal storage, which can be expanded to 32GB through micro SD. 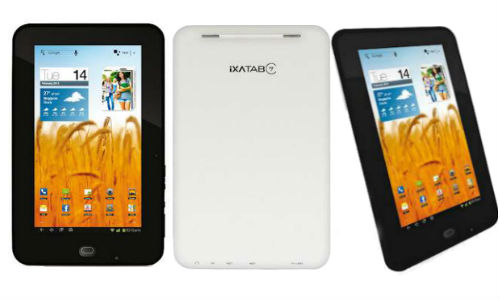 It also features Wi-Fi which allows the user to access Internet, Video calling, Sending emails and much more. The built in 0.3MP camera will allow you to capture amazing moments and also allow you to video chat. iXA Tablet also has good multimedia features like MP3, WAV, WMA, AAC and Etc. You can also watch AVI, MP4, MOV, 3GP videos on the go. Users can also avail optional accessories like protective case and a keyboard along with iXA Tablet. The only drawback of this tablet is, it still uses Android 2.3 as its operating system and a resistive touch screen which is not that flexible. Where as Datawind’s UbiSlate 7C has a capacitive screen with same price tag.

What Should You Look in iXA Tablet ?

Since this tablet is releasing in the month of May, please don’t think that it will have Android Icecream Sandwich as its operating system. You cannot expect Ice cream sandwich to be implemented in this kind of cheap priced tablets. And another problem with these kind of cheap tablets is, most of the companies are trying  to make the tablets as cheap as possible without paying much attention to the actual functionality. So its better to concentrate on what exactly students want from it. You cannot expect a 18yrs college going student to buy a cheap tablet and use it without installing more applications or run them at a time. Its better for the companies to design tablets which can be handled by elders too. Most of these cheap android tablets are not liked by college going students. The only people who buy these kind of normal and cheap tablets will be school going students.

Companies should focus more on quality, when compared with cheap price tag and tactics to get popularity. Lets hope that iXA Tablet gets some student attention.