Nokia sure seems to be completely sold on the Windows platform, because the previous rumors about a Nokia Windows 8 RT tablet are apparently true! This will be the first Windows 8 RT tablet from the Finnish manufacturer, and it will go head to head with the Microsoft Surface RT. While not much is currently known about the tablet, it’s rumored to look like a larger version of the Nokia Lumia series of phones, which means bright colors and the signature Nokia build, which is fine by us since the Lumia series are great looking Windows Phone 8 devices.

Since Windows 8 RT is capable of running on ARM based processors and they’re basically less power hungry than desktop and laptop processors, we can expect good battery life. In fact, Nokia claims the device is capable of 10 hours of active use all by itself, which is exactly what the Microsoft Surface promised but unfortunately couldn’t deliver. The Nokia Windows 8 RT tablet is going to pack in a couple of extra features as well that’s going to give it the edge over the Microsoft Surface.

Nokia Windows 8 RT Tablet – The specs and what we know:

As of now, the Nokia Windows 8 RT Tablet is said to come with a quad-core Qualcomm Snapdragon S4 processor, at least 2 GB of RAM but there’s no concrete information on storage and if it includes support for expandable storage either. The screen is said to be 10.1 inches, and similar to the Microsoft Surface RT. Interestingly, the Nokia Windows 8 RT tablet is set to come with cellular support in addition to Wi-Fi. Plus, the best part is an attachable keyboard cover a la the Microsoft Surface that will not only double up as a kickstand, but will include 2 USB ports for further expansion and an extra battery pack that will extend the battery life of the tablet will be launched as well! 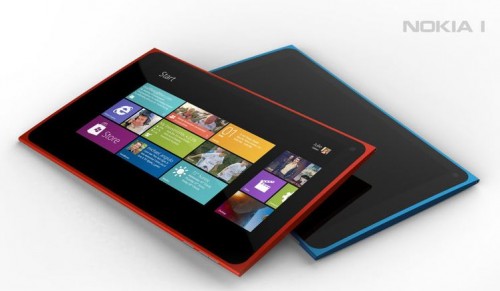 What remains to be seen if the Nokia Windows 8 RT tablet will be priced competitively, because most people seem to think that the Microsoft Surface RT is overpriced, even though it’s pretty much same as the iPad. Yes the app store is comparatively barren to those on rival operating systems, but if the device is great we can expect better adoption rates in the future. Nokia isn’t in the best shape right now so let’s hope that the Nokia Windows 8 RT tablet gets it back on track, your thoughts?