Whenever you think of a flagship mobile phone, a couple of things come to mind. A great screen, powerful specs, the latest software, a good camera and unfortunately, a high price. Getting the most powerful smartphone on the market will definitely burn a hole in your pocket, specially if you’re buying it unlocked and SIM free, as is the norm in many countries. Then there’s the Nexus range of devices from Google. Combining the best hardware with a pocket friendly price without almost any compromise has always been the hallmark of the Nexus brand. The recently launched Google Nexus 5 smartphone, the very first device to run Android 4.4 KitKat is now available, here’s our complete review! 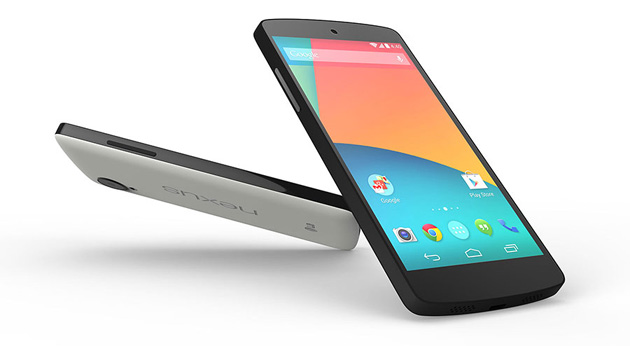 Upon first look, the LG manufactured Nexus 5 probably isn’t going to catch your eye. When the screen isn’t on, the front is a plain black surface broken only by a tiny round earpiece and front facing camera on the left. LG has done away with the disco-light-glass finish it previously used on the Nexus 4, and opted for a much simpler polycarbonate body with a plain, save for the inscribed Nexus logo, back. The only design decision that breaks subtlety here is the metallic ring around the rear facing camera, which I think is a nice touch. But overall the phone looks simple, which I imagine is exactly what Google wanted. 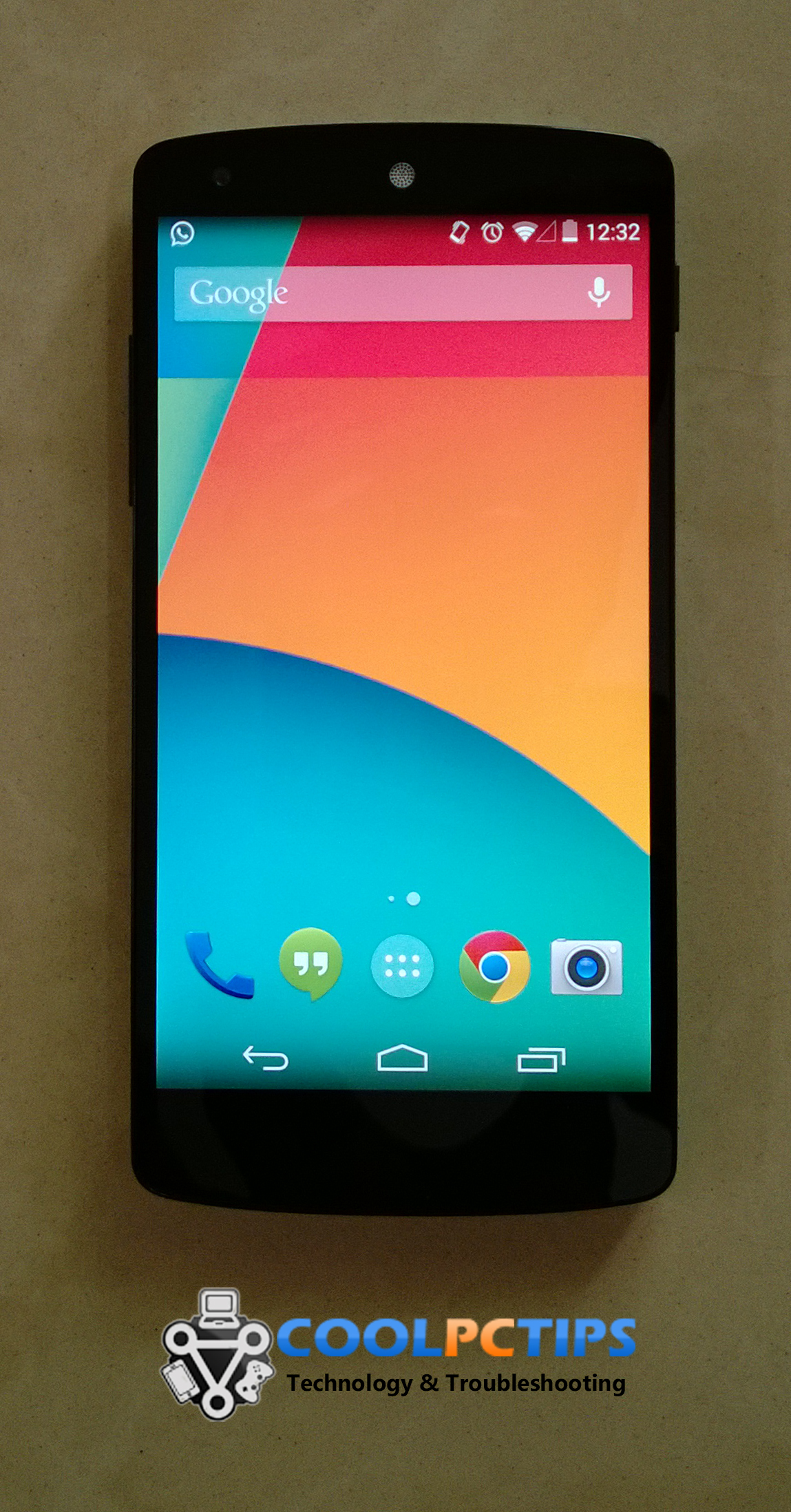 Weighing in at just 130 gm and only 8.6 mm at its thickest, the Google Nexus 5 is very light and easy to use. However there is a trade off. Against some of its competitors, and even its predecessor, the Nexus 5 seems slightly flimsy. That’s not to say it doesn’t feel good to hold, it does, but you just don’t get the feeling of solidity that you’d get from say, the HTC One or Nokia Lumia 925 or Apple iPhone 5S. It just leaves something to be desired, and you sort of get the idea that the Nexus 5 won’t be able to survive too many drops. There’s also a nice notification LED light under the screen, which blinks white whenever there’s a notification. By default it isn’t too useful, but third party apps let you change its color for different app notifications, and makes it much more functional. 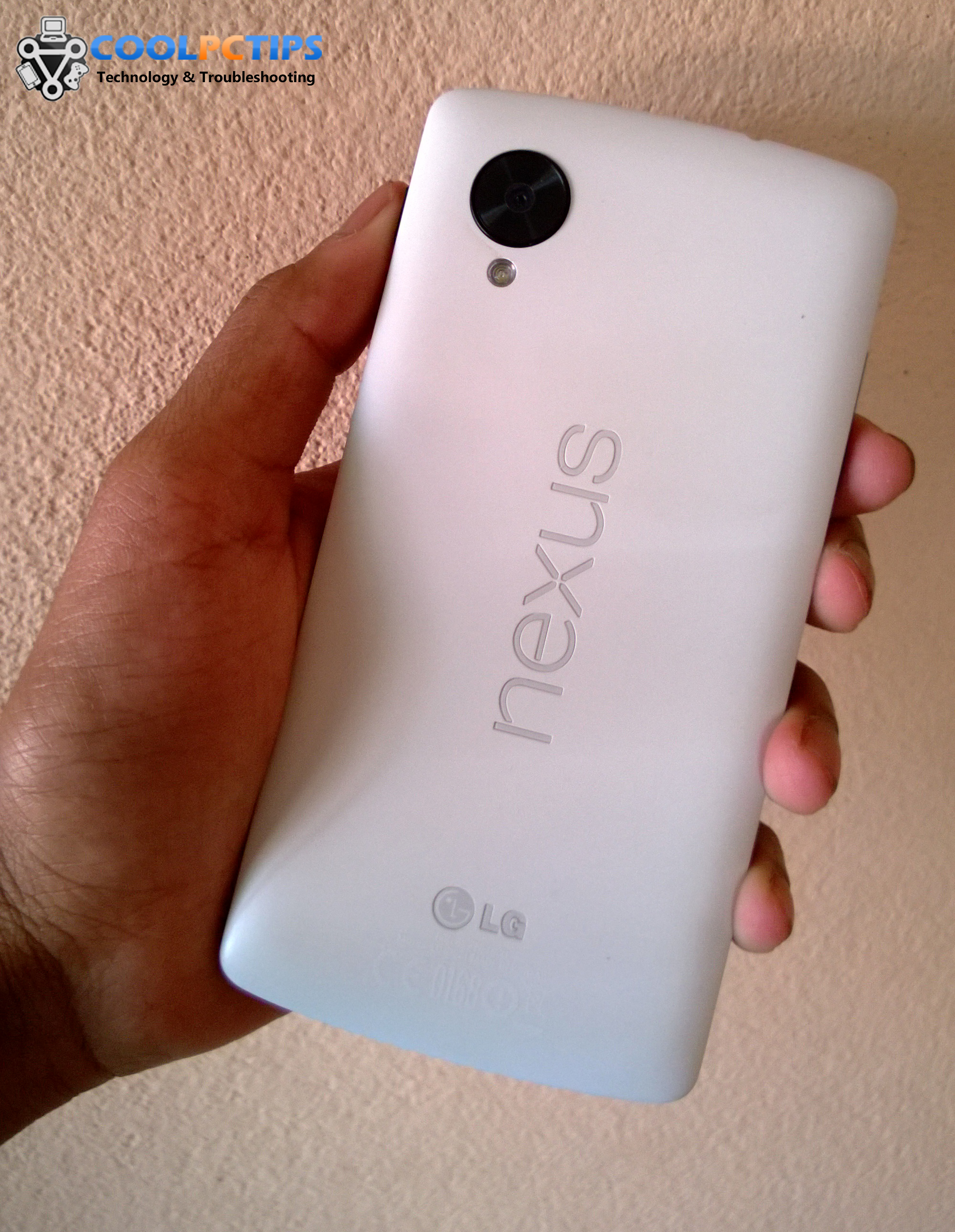 The Google Nexus 5 packs in some serious firepower, and can go toe to toe with pretty much any flagship phone out there. Coming with the latest Qualcomm Snapdragon 800 SoC, the Nexus 5 blazes through daily use and benchmarks, there’s really nothing to complain about here. There’s 2 GB of RAM onboard as well, so it can handle pretty much anything you throw at it. The full specsheet follows:

As always, there’s no expandable memory owing to the unibody construction, but considering you’re getting stock Android, there’s less bloatware to deal with. It’s small comfort for media hoarders, but hey, you gotta make some compromises at this price. More than anything though, the Google Nexus 5 is a vessel for the latest Android versions, and boy does it fly with these specs. I’ll get to that in a bit.

The screen is a “True HD IPS+ LCD” unit, covered with Corning Gorilla Glass 3, running at full HD 1080P resolution. Say what you will about it, but the screen is gorgeous. Full HD resolution really makes the UI pop, and the stock colorful wallpapers look really vibrant. Compared to the HTC One or iPhone 5S, it might be slightly desaturated and may seem a tad bit washed out, but that’s only when you’re actually comparing them side by side. It’s not a deal breaker or anything, the screen still gets our thumbs up, and is one of the best smartphone screens out there.

With these specs, you really don’t have to wonder about how the Nexus 5 will perform. Coupled with Android 4.4 KitKat, which Google promised uses less resources than older versions, it’s only logical that there won’t be any slowdowns, and there aren’t. Whether you’re flipping through the menu, switching from app to app or even playing a graphics intensive game, the Nexus 5 doesn’t hiccup, save for some extra troublesome rendering portions. It’s the same with internet browsing as well, you won’t find any lag or extra loading times, everything is fast, and fast as hell.

So since it’s packing in the most powerful mobile SoC and a huge 1080P screen, there’s bound to be battery issues right? Well yes, and no. The 2,300 mAh battery is decent, but more is always better, and in this case we’d have definitely liked a bigger battery. The Nexus 5 lasts around 12-13 hours with normal usage, and can stretch upto 20 hours or so if you’re really frugal. Battery life is sort of inconsistent, but it should settle with proper charge cycles and once apps are optimized.

There isn’t much to talk about call quality, calls are loud and clear, and even on the highest volume level, you can’t hear audio breaking up. Probably the only issue here is with the speaker, which can sound too reverb-y at times. Despite the fact that there are two speaker grilles at the bottom, there’s just one speaker, so audio from it is a hit and miss. Google has confirmed that it’s working on a software fix for the intermittent issues, so that’s good to hear.

The Google Nexus 5 is the first device to run Android 4.4 KitKat. While not a huge update, it does bring some pretty nifty features to the table. A lot of these features revolve around Google Search, specifically voice search. Previously seen on the excellent Moto X, voice search is heavily emphasized on the Nexus 5. In fact, Google Search is a big part of the experience. Swiping left on the home screen brings up Google Now, and saying “OK Google” lets you voice search. Unlike the Moto X though, this works only on the launcher, so it’s less intrusive. The phone dialer has also been changed, and is now much better looking and easy to use. 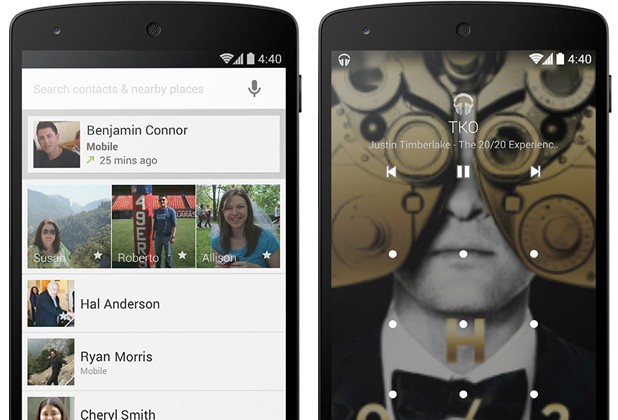 The UI has also been changed, and you’ll notice a lot of flat design and whites this time around, instead of 3D and blacks. The other most noticeable feature is a unified file manager, that lets you move things around even from your cloud accounts. Say you’re in the Gallery, and you can work with stuff directly from Dropbox as if it was a part of your phone storage. It’s a nice touch, considering media savvy users will probably be using a lot of cloud storage with the limited storage available on device. IMs, SMS, MMS, voice calls and video calls are also now unified under the Hangouts app, and will help consolidate conversations from different platforms.

Overall, Android 4.4 simplifies the OS experience, and unifies a lot of different features and services under a single name or new UI, so you could say it’s easier to use. Google has also changed the 3 standard bottom keys, they now turn transparent when not in use, so you have extra screen real estate. And finally, there’s a whole lot of improvements under the hood, which make the OS more power and resource efficient. According to Google, even older devices with 512 MB RAM will be able to run it, so perhaps we can soon see an unfragmented Android ecosystem.

Nowadays, the camera is one of the biggest criteria to judge a phone by. With Nokia’s stellar imaging efforts and Apple not far behind, everyone else really has to step up their game. The Nexus 4 was infamous for its lackluster camera, so the camera on the Nexus 5 had to be much, much better to compete with other flagships, and the good news is, it is better. But the bad news is that it still isn’t great. Even though it packs in HDR, OIS and other fancy tech unlike its predecessor, the picture quality is still sort of a gamble. In some situations it’s good, in some, it’s bad and in some, it’s okay. Here’s a couple of comparison shots between a Nokia Lumia 920 and the Google Nexus 5: 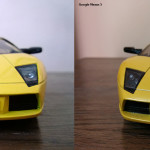 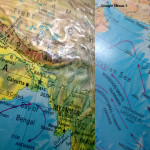 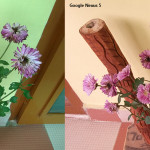 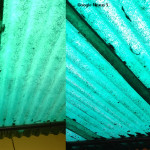 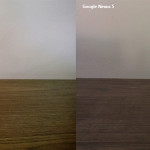 As evident, the Nexus 5 appears washed out and uninspiring for the most part, save for the plant shot, where it’s more accurate with color representation of the leaves and flowers, while the Nokia Lumia 920 oversaturates color, to an almost comical level. Even with the same lighting and focus points, it doesn’t really capture much detail. HDR does help though, so make sure you leave that on. Video recording is also pretty good, again nothing to write home about. Optical image stabilization is a welcome addition here, and does help with shaky hands.

The Google Nexus 5 is a rare breed of phones. It’s powerful, good looking, feature packed and most of all, affordable. Even if it was priced close to other flagships, the Nexus 5 would be well worth it. Google knows the power of simplicity and features over gimmicks (we’re looking at you, Samsung!), and that’s exactly why the Nexus 5 shines. If you’re out to buy an Android phone right now, I’d say this is the one you should get, hands down. Unless you’re a really photography buff, the Nexus 5 will satisfy every need. But then again, if you are a photography buff, there’s a lot of other options. Sure, the expandable storage is an issue, but at this price you really can’t go wrong!

Special thanks to Shaakunth Kallem for letting us review his phone!