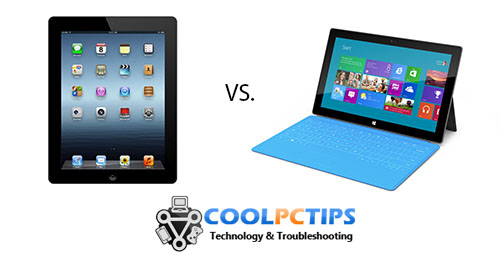 A point worth noting though, is that the Surface will come in 2 variants, namely Microsoft Surface running Windows 8 RT on an ARM processor and Microsoft Surface Pro running Windows 8 Pro on an Intel processor. For the most part, both variants look the same, but the difference is in the internals. The Windows 8 RT version of Surface is more “tablet” like and will cost somewhere around the iPad, or even lesser. The Windows 8 Pro version, on the other hand, will be as powerful and expensive as modern Ultrabooks and will be running the latest Intel Ivy Bridge processors. For comparison sake, we’ll consider just the RT version of Microsoft Surface, but include the Windows 8 Pro version specs as well. So let’s have a look at the tech specs first:

None of the above operating systems are too heavy on hardware, but in general faster processors and such do help. The Surface could very well come with the well reviewed quad core Tegra 3 SoC which will include an ARM processor clocked somewhere between 1.4-1.8GHz. Frankly, that’s quite enough processing power to go against the dual core A5X. RAM and GPU haven’t been revealed yet though. However, if you’re looking at a Surface Pro, the Intel Ivy Bridge processors to be included in it would blow away any and every tablet including the iPad. Storage is a completely different matter here and the Surface is a clear winner. Not only does it include 32 and 64 GB variants, it also support expandable memory through MicroSD upto 32 GB. This is quite necessary infact, due to the Surface running Windows 8, which has the functionality of a PC.

The Microsoft Surface features a larger screen of 10.6 inches while the iPad comes with a 9.7 inch screen. What the iPad lacks in size, it more than makes up for in clarity. Incorporating Apple’s Retina Display, the iPad features 264ppi (pixels per inch), which means that pixels aren’t discernible with the naked eye and the display is sharp and crisp. The Surface isn’t far behind though, the Windows RT version has a 720P resolution screen and the Windows 8 Pro version has a 1080P resolution screen. They’re not bad by any means, it’s just that they pack in less pixels than the iPad. Another thing worth noting is that the native aspect ratio on the iPad is 4:3 while the native aspect ratio on the Surface is 16:9. So basically the iPad is great for normal tablet usage, but the Surface is good for media playback and movies. Furthermore, that aspect ratio gives it a more PC-like feel. 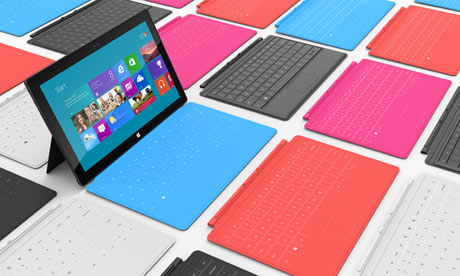 By the time Microsoft Surface is out, the new iPad will probably running iOS 6. It brings quite a few new features to the device. But then again, it’s no Windows 8. Before I sound all one sided, hear me out. iOS is a great operating system that gets the job done, but as a tablet. No matter what, the functionality of the iPad is restricted to a tablet. There’s always the home screen, list of apps, settings and such. The Microsoft Surface has an edge here, it has both the Metro interface which is touch-optimized and the regular desktop functionality. For light usage, you can use the apps on the Start screen or switch to desktop view and practically get a laptop when required. It’s much more customizable and functional than iOS. The Surface also has another advantage over the iPad in terms of ports and connectivity. It it rumored to support LTE calling but will not feature a 3G SIM slot like the iPad. But it does have expansion slots, MicroSD (Surface) and MicroSDXC (Surface Pro). An HDMI out is included as well. The Surface will come with a USB 2.0 port and the Surface Pro will come with a USB 3.0 port as well as stylus support. The iPad, with just one dock finds itself short in the connectivity department. Both Surface tablets will be able to use the attachable keyboard used in most photos and will come with 2 antennas for networks compared to the single one on the iPad. This keyboard is different due to it being magnetically attached and pressure sensitive. Even charging the Surface is pretty cool, it’s done via a magnetic strip.

The iPad has one really big advantage though, and that’s apps. Apps for iOS devices are close to a million and it’s become a running joke when referring to an action or task, “there’s an app for that!”. Microsoft’s app store is just starting out and it will be some time before it can come close to the number of apps iOS devices offer. It might deter some from buying the Surface at launch. Now, it’s quite common knowledge that Apple products are a tad bit overpriced. Microsoft has not revealed the prices of the Surface range, but apparently, the Surface will be priced around 400-500$ and the Surface Pro will be priced around 900-1200$. For the amount of features and functionality it offers, that sounds like a great price. Keep in mind that the Surface Pro has equivalent power to a modern ultrabook, so that price isn’t really so high. There are a few rumors floating around that the Surface RT version will actually be priced under 300$. It’s highly unlikely, but hey, we can dream right?

So to wrap it up, go for an iPad if you’re an Apple fan who loves their interface, ease of use, looks and cross product integration. But if you’re ready to try out something new and different, you might want to think again. The Surface is more than just a tablet but Microsoft is in uncharted waters with these two products, taking on a behemoth with years of market establishment. It’s a bold move indeed, what do you think about it? Which one is it for you, Apple iPad or Microsoft Surface?