Blizzcon 2014 brought with it some pretty big surprises, the biggest of which was the announcement of Overwatch, Blizzard’s first new franchise in 20 long years! Amid the Warcraft movie details and Starcraft II: Legacy of the Void going solo, Overwatch came as a breath of fresh air in a conference always surrounded by pretty much the same logos and characters since almost 2 decades, which of course, isn’t necessarily a bad thing. We’re big fans of Blizzard’s games, but we have to admit they were getting a bit typecast as developers. Overwatch is a new team based multiplayer shooter set to release sometime next year. Here’s all we know about it!

Since a couple of years, there were rumors of a new IP from Blizzard codenamed ‘Titan’, an MMOG. After going through a reboot, it was cancelled in September 2014 for apparently not going the direction in which they wanted it to go. It was described as an MMORPG in a futuristic sci-fi world where players were heroes by night and commoners by day. Overwatch caught everyone completely by surprise because there weren’t any rumors about it floating around either. Chris Metzen, Senior Vice President of Blizzard Entertainment confirmed that Overwatch incorporates some elements and art from Titan, such as maps, but the two were otherwise unrelated. 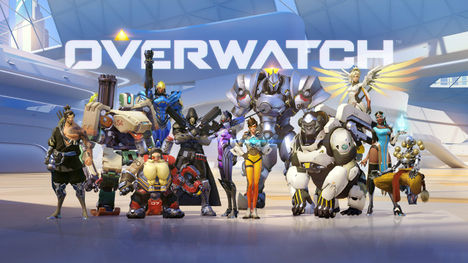 Overwatch is basically a team based multiplayer shooter along the lines of Team Fortress 2, with unique classes and an art style reminiscent of the same. In the newly released trailer and gameplay footage, we’ve seen some of the characters, which really do look diverse and have cool powers. What’s interesting is that even though it’s a first person game, there’s melee based characters too! From the first look, the game seems to be very fast paced and fun, with a focus on team diversity.

As of now there’s no particular story, but it has been described as a 6v6 shooter on a future earth with an ‘elite international task force’ fighting to restore balance and liberty in all nations. It also isn’t clear whether the game will be free to play or subscription based. And although Blizzard said they want to see Overwatch ‘played wherever it can be played on’, we’re guessing this is a PC only affair for now. Here’s the official press release:

The action of Overwatch takes place in a technologically advanced, highly stylized future earth. In a time of global crisis, an international task force of soldiers, scientists, adventurers, and oddities known as Overwatch had come together to restore peace to a war-torn world. After many years, the group’s influence waned, and it was eventually disbanded. Overwatch might be gone now . . . but the world still needs heroes.

With an emphasis on accessibility and pure fun, Overwatch brings Blizzard’s signature easy-to-learn, hard-to-master gameplay to the FPS genre. Harnessing the power of their hero of choice, players will join forces in teams of six and battle each other across a range of futuristic global locations, from the hologram-lit streets of London to a bazaar in the shadows of a high-tech Egyptian pyramid. Every battlefield is iconic and built to highlight each character’s unique abilities, and fights can shift from streets to rooftops to open skies within the span of a breath.

“Overwatch is our take on a vibrant, near-future universe with amped-up characters and action-packed team-based gameplay,” saidMike Morhaime, CEO and cofounder of Blizzard Entertainment. “With every new Blizzard game, we look at our favorite aspects of a genre and put our own spin on things. Our goal with Overwatch is to create an awesome FPS experience that’s more accessible to a much wider audience while delivering the action and depth that shooter fans love.”

The heroes of Overwatch each bring their own distinct weapons and superabilities to bear. Here’s just a glimpse of the numerous heroes that will ultimately fill Overwatch’s rosters:

As seen above, there seems to be representatives from multiple countries, which is a great thing. Check out the video below for a preview of the characters and do let us know what you think of it!