Finally the day has come for Vodafone users. From the past 15days, we are watching the intensive 3G war in India. So far, Airtel, Idea, Reliance has reduced their 3G charges to almost 70% to 90%. Vodafone users are eagerly waiting for changed 3G data plans of Vodafone 3G. And today, Vodafone has silently tweaked their 3G plans. The new 3g offers packs from Vodafone are some what close to Airtel and Idea cellular 3G plans. Vodafone will surely survive with their new 3G plans and stay in competition for longer time now. Recently we saw Bharthi Airtel and Idea Cellular reducing their 3G charges to 70% and Reliance Communication to 62%. Thought RCOM has announced their prices to reduce by 62%, it seems they have reduced it to almost 90%.

Vodafone is offering ‘pay as you go’ tariff at 2paise per 10MB, which is similar to Idea 3G tariff. But cheaper than Airtel’s 3paise per 10MB rates. The new Vodafone 3G plan offered 25MB data download per day with Rs 26 recharge. Also there is a Rs 44 pack which offers 150MB of data download with 7days validity. And with Rs 102, you can get 300 MB data download for one month. Earlier it was Rs 102 for 204MB.

Lets Check out few more Vodafone changes 3G plans,  For 1GB 3G data download, Vodafone will charge Rs 251 and for 2GB data download, Rs 451. And Rs 850 for 3GB data download with double validity offer. Where you can use the plan for 60days from the date of recharge. Where as other operators are offering 4GB for a lesser price compared to Vodafone, but with 1 month validity. Vodafone will charge Rs 1250 for 5GB 3G Internet and Rs 1501 for 10GB data download. But you will get 2 months validity instead of 30days. All these charges are for prepaid users. For postpaid users, the lower data packs are costly and comparatively not better than prepaid plans. Like, Vodafone offered 3GB of 3G data for Rs 650 which prepaid will pay only Rs 451. and higher data plans like 3GB, 5GB, 10GB packs are priced the same as prepaid customers were offered. 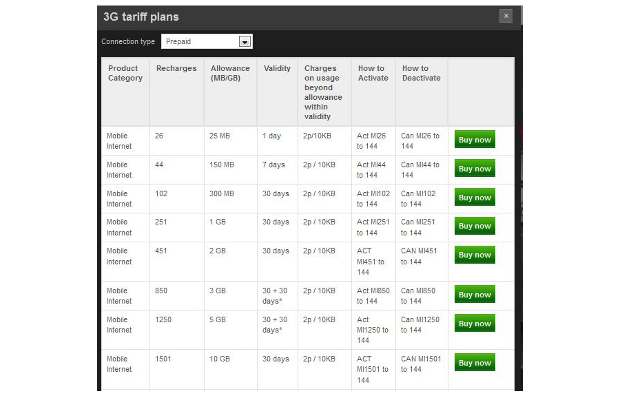 Seems like Vodafone really didn’t change the tariff rates tremendously, but has simply changed some packs with slightly more data per month and with more validity ofcourse. The two main operators who have changed their tariff plans to very reasonable are Aircel and Reliance Communications. Aircel has offered unlimited 3G plans for just Rs 8 per month with 50MB 3G speeds for a day. While the costliest plan is for Rs 997 for 10GB data download with 30days validity.

Apart from tall these things, the user should keep one thing in mind, after the limited 3G broadband Internet, the 3G speed will be degraded to 128bkbps in Airtel and 64kpbs in other operators. So, be wise in using your 3G data and make sure you confirm the cut off speed in 3G after the limited data is consumed totally. Please drop us a comment on what you think about the new Vodafone 3G plans.