After the successful launch of Funbook tablet, Micromax has recently launched their new product called Funbook Pro. We can surely expect a great fight between Micromax Funbook vs Funbook Pro, at this time. Funbook Pro tablet comes with a price tag of Rs.9,999, and is the advanced version of Micromax Funbook. Micromax has already established the tablet market with their popular product called  Micromax Funbook/ This was the only better tablet available at a price tag of Rs 6,000. Seeing the huge success of Funbook, Micromax aimed the most competitive market of cheap android 4.o ICS tablets. This was the reason to launch Funbook Pro.

Micromax Funbook Pro comes with a Android 4.0 Icecream Sandwich operating system, and its obvious to guess the fact that Funbook pro will capture the mid-ranged tablets market. But what really matters for the users is, how far Funbook pro can beat Funbook, and also how does the hardware justify the price when compared to its predecessor. Read on for a complete review on Funbook Pro, as we compare few of the main features of both Micromax Funbook tablets. Below you can find a detailed tabular list on Micromax Funbook vs Funbook Pro, as we compared each of the technical specs in detail. 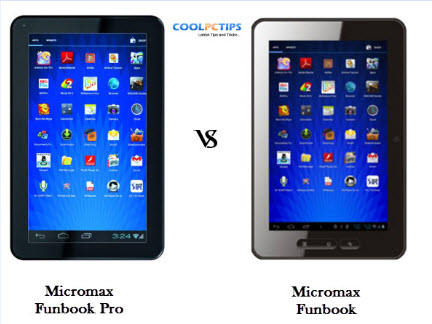 Micromax has been promoting the device as a great resource for students, as the device comes in preloaded study materials and online tutorial videos. These study materials include materials for primary level students to undergraduate level students. Also practice papers for Engineering, Medical and MBA tests are available. There are many other features in Funbook tab, where a student can completely gain knowledge in difficult subjects. The most amazing part of Funbook is, a student and enjoy all these benefits with unlimited access, by just upgrading few options.

This above  Micromax Funbook vs Funbook Pro table lists out the major differences between each of these tablets. Apart from these main features, Funbook pro can read and play all the common file formats like MP3, WMA, OGG, AAC, FLAC, APE, 3GP, WAV, DOC, DOCX, PPT, PPTX, XLS, XLSX, PNG, JPEG, BMP, MPEG2/4, AVI, WMV,MKV,MOV,RM and RMVB. The device also comes with a bunch of pre-loaded apps, out of which the live TV app comes in with access to about 48 live TV channels. This can be accessed with the help of Tata photon plus bundle. The device can play High Definition videos at 2160pixels smoothly. 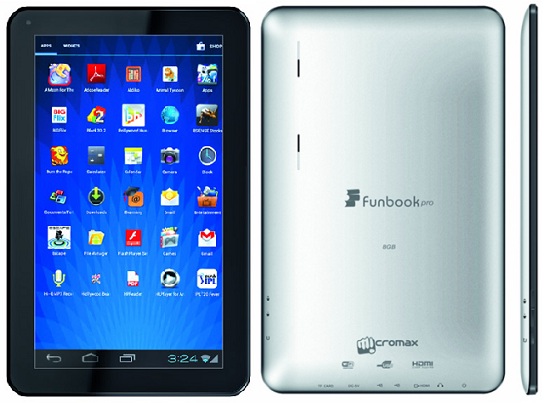 Funbook Pro very well justifies the price with wonderful features. A huge display screen and 2160pixels High Definition video playback add to its value. The point of concern that arises is, the price difference between Funbook and Funbook Pro is  about Rs.3000. People might see the Funbook Pro as just an upgrade of Funbook. But infact, they should notice the huge differences like screen size, increase in memory, better storage, supporting universal 3g dongles. and battery. But of course these are main the factors that make Funbook pro much more amazing than the normal version. The huge 5600 mAh battery will make people to stick to Funbook pro for much longer, as we still use 3600mAh battery for our existing tablets. Snapdeal is offering Micromax Funbook Pro for Rs 9,999, along with it you will get one of markets best USB Dongle from Tata Docomo Photon. We hope this Micromax Funbook vs Funbook Pro article has helped in deciding which among them is a better tablet. If you have any queries, please leave a comment below.