Pong was one of the first games that reached mainstream popularity. It was a simple tennis based game that involved 2 flat paddles hitting a ball across and points were allotted to the opposite player if one player missed the ball. Although extremely simple, Pong was a rage when it was launched in 1972 by Atari and thus began the now huge and extremely successful game industry. Atari went on to make some more extremely successful arcade games for a few more years but then came upon hard times in the 80’s. After recovering and and launching a few game consoles like the Atari Lynx, Atari unfortunately faded into relative obscurity by the 90’s, highly unlike its previous avatar in the 70’s. The new millennium brought with it a reinvention and Atari started to release a few new games and still remains active, albeit a shadow of its former self. This year marks the 40th anniversary of the big daddy of gaming companies and it has partnered with Microsoft and Internet Explorer to bring you all the classic Atari Arcade games online, for free! 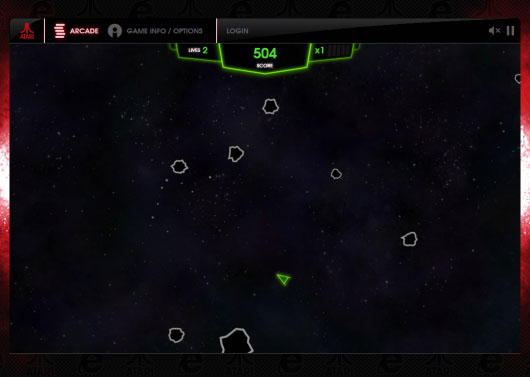 Simply go to Atari Arcade Official Website and you will be able to play classics like Pong, Asteroids, Centipede, Lunar Lander, Breakout and more! There are a lot of Atari arcade games and they will be added to this formidable lineup soon. The only annoying thing is, it asks you to install Internet Explorer if you’re using another browser. It’s not too intrusive, but you keep seeing Internet Explorer advertising. The Atari Arcade games show off the power of HTML5, so make sure your browser supports it. You shouldn’t be too concerned, every modern browser supports it. Since it uses HTML5, there is no need for third party plugins like Adobe Flash or Sun Java. HTML5 enables developers to create rich media online content without having to depend on plugins like Flash. It’s a pretty big step forward and the Atari Arcade games double up as a platform to show off the capabilities of HTML5. The icing on the cake? Budding developers can download a free SDK which comes with tutorials for developing their own games that could be added to the library! These games and the site are touch optimized for the arrival of Windows 8, so they can be played on the move as well. Ain’t nothing like the classics right? Even better when they’re remade versions for this generation!