Just like Micromax and Swipe Telecom, HCL has too introduced a new 7 inch tablet with calling function. The HCL ME V1 tablet is the first tablet from the Indian manufacturer that can make its place among the tablets with calling function under Rs. 10000. While their previous offering, the HCL ME Tablet Y2 is capable of making calls, it also retails at a much higher price tag of Rs. 14999. Yes the HCL ME V1 tablet does compromise on some aspects, but it’s basically one of the cheapest tablets that is capable of making calls, and it’s not from an unknown manufacturer either. 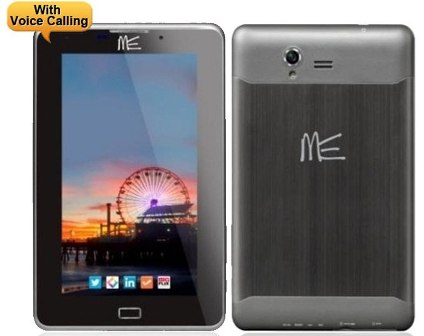 It’s not going to win any awards for speed or innovation, but if all you need is a basic tablet that can make calls and won’t burn too big of a hole in your pocket, the HCL ME V1 tablet will do quite nicely. It’s got enough specs if you’re going to check mails, browse the internet or occasionally watch a movie, speaking of which, it supports full 1080P video playblack. One of the biggest compromises here is that although you can insert and use a 3G SIM for calls, you cannot browse the internet with 3G speeds. For faster speeds, you can connect through Wi-Fi or simply use a universal 3G dongle or a 3G dongle from any of the best network providers to browse at 3G speeds.

It comes with just Android 4.0.4 Ice Cream Sandwich out of the box and there’s no mention of an Android 4.1 Jelly Bean update as of now, but with those specs we don’t think that’s going to be possible. The HCL ME V1 tablet will retail for Rs. 7790 and will go against the Micromax Funbook Talk. Do drop us a line with what you think about this launch!