After almost 8 long years we’re finally getting ready to see a new generation of gaming consoles release. Sorry Nintendo Wii U, but unless we get to see shiny new graphics it just doesn’t feel next gen. Of course, that doesn’t mean that either upcoming game consoles of 2013 lack in the features department. We saw the Sony PlayStation 4 announced at an event in New York. Although actual console wasn’t seen, the previously leaked new design of the classic DualShock controller was on display. For a large event, there was a surprisingly small amount of information revealed, but even those tidbits of news were important for the gaming world. So here’s what we know as of now:

Mentions of the PlayStation 4’s guts were done in parts, and for now we know that it’s going to use an 8 core AMD CPU codenamed Jaguar. It could be based off of the current Piledriver architecture used in the AMD FX series. The graphics will be handled by a unit based on the next generation AMD Radeon HD range, that is the 8000 series graphics cards. The PlayStation 4 will also come with a separate processing unit for video compression and decompression. Also, like the Xbox 360, there will be 8 GB of RAM that will be shared between the CPU and GPU. Blu-Ray discs will be the storage media of choice here, so there’s no surprise that there’s a Blu-Ray drive as well. The usual connectivity options like WiFi, Ethernet, USB 3.0 and Bluetooth 2.1 support is included too. Curiously though, along with the quintessential HDMI out, there’s also analog outputs included. 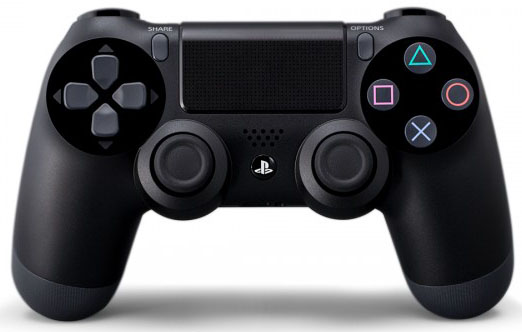 For all the little that has been revealed, there was no actual hardware shown apart from the DualShock 4 controller, which has been redesigned. Now along with the usual 4 buttons, 2 analog sticks and D-pad, there’s a new Share and Options button. The Options button will basically perform the functions of both Start and Select. The most noticeable change from its predecessors is the inclusion of a capacitive touchpad, which can be clicked. Finally, there’s also a light bar that will be used to display colors according to players or even as feedback from the game.

A couple of first party titles were announced with the reveal, which include new installments in the Final Fantasy, Infamous and Killzone series. For the first time in Sony’s console history, the PlayStation 4 won’t be backwards compatible with PlayStation 3 games. However, since Sony acquired Gaikai, the cloud gaming company, there’s plans of bringing all old PlayStation titles, even those from PlayStations 1 & 2 to the PlayStation 4 via streaming. Furthermore, a new iOS and Android app was announced as a companion for the PlayStation 4, just like Xbox SmartGlass.

So that’s all we know for now, apart from the fact that the PlayStation 4 could be seen on shelves by the end of this year. Games look stunning of course, and we can’t wait to see what the console looks like! Do drop us a line and tell us what you think of the PlayStation 4 announced, do you think it will be better than the Xbox 720 or whatever Microsoft’s new console will be called?