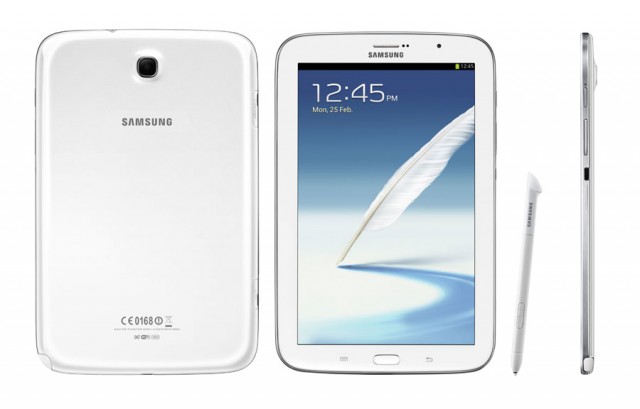 For the most part, the Galaxy Note 8.0 is just a larger Galaxy Note 2, down to the processor and RAM. It’s also a phone, of course oversized. However, unlike the Note 2, it uses a regular TFT LCD screen and skips the AMOLED screen, presumably to keep costs down. It’s not really going head to head with the 7 inch tablets like the Nexus 7, but will be competition for the slightly larger iPad Mini. Design wise it looks just like an oversized Note 2, which is not really a great thing since the Note 2 isn’t a particularly good looking device. Here’s what’s packed in that shell:

The screen might come as a disappointment for many, specially with devices like the HTC One and Sony Xperia Z packing in 1080P screens in a smaller form factor. Overall the specs are quite good otherwise and with the added S-pen functionality, it’s sure to be more than just specs.

The biggest draw for this device is definitely the S-pen. It’s already available in the Galaxy Note, Galaxy Note 2 and Galaxy Note 10.1 and has been proven to be excellent. For the first time though, the S-pen will be usable on the hardware capacitive keys too. Also, Samsung has now enabled S-pen functionality for third party apps, and a customized version of Flipboard shipping with the device will be the first third party app to take advantage of this. Features like multi view, note taking and gestures are carried over from the Galaxy Note 2 as well. Samsung is also pushing the Galaxy Note 8.0 as a dedicated e-book reader and includes a features that adjusts screen brightness and contrasts while reading e-books automatically, which also works for third part apps. And finally, a new feature called IR Blaster lets you control your TV and home entertainment system via a built in app powered by Peel, the same company responsible for pretty much the same functions on the HTC One.

All in all, the Galaxy Note 8.0 seems like a good buy in comparison to the iPad Mini, but the final verdict can only be made once pricing and availability is announced. Drop us a line with what you think about the Samsung Galaxy Note 8.0 specs and features, is it the midsize tablet to get?