Apple iPhone 3GS was the most successful Apple device in India. Many people have already bought this amazing Apple phone, and are very happy with it. Currently Apple iPhone 4S is booming the Indian market. But buying an iPhone 4S is kinda difficult for a common man in India. If you always dreamt of owning an Apple product, then here is your chance! Aircel has announced that Apple iPhone 3GS will be now available for just Rs 9,999. Where as Airtel is giving the same phone for Rs 20,908. This is more than double the price of what Aircel is offering to their customers.

The only catch in this deal is, the customer who is buying this Apple iPhone 3GS for Rs 9,999 has to take a postpaid connection. You need to pay an advance rental of Rs 3,000 and get this third generation Apple iPhone. For paying the advance rental, the customer will be able to access unlimited 3G Internet for a year. Also in 3G circles, the user will be eligible for using 2GB of data at 3G speeds and unlimited data access at 3G thereafter. Which means, after that 2GB limited access, the user cannot download data with 3G speeds. 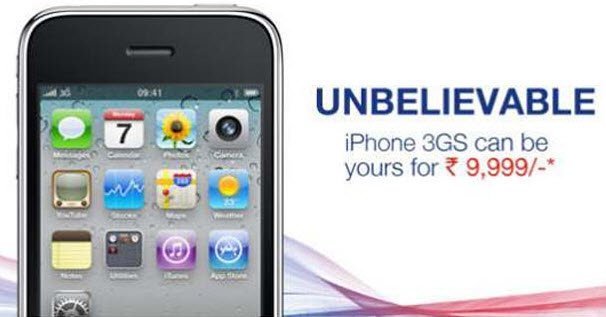 Where as in 2G only areas, the user will send 2,500 local and national SMS and 1000 minutes of local, STD calls. And can use unlimited 2G data for a period of 6months.

This is an amazing offer for people, who want to own a Apple iPhone. Indian market is booming with smartphones, and you can be the proud owner of an Apple iPhone. Instead of investing your Rs 10,000 in any cheap android mobile phones, I would suggest you to buy this amazing Apple iPhone for just Rs 9999 and then use it with unlimited internet plans. And Aircel is the network provider in India, which provides cheapest 3G plan. So even after using this Apple iPhone for a year  in 3G circles or 6 months  in 2G circles, the user will always get attractive data and voice plans.

Even Airtel is offering the same iPhone 3GS with their 3G and 2G services. But the thing is, you have to pay Rs 20,908 to own it. When you getting the same product for less than what Airtel is offering, you would be surely willing to buy this iPhone 3GS from Aircel. And you will not regret your choice. You can also check out the news in Aircel official website.

Let us know what you think on this post and leave your comment if you have any queries.