Videogames kept getting better looking and got more gameplay features, but nothing changed it as much as the Nintendo Wii. Suddenly, games required more on your part than just twiddling thumbs. The Kinect from Microsoft took it one step further by completely getting rid of any controllers. Now, the next Xbox is set to come with a more advanced version of the Kinect, tentatively called the Kinect 2.0. As if that wasn’t enough, there’s a completely new concept coming in, called Microsoft IllumiRoom, which will take immersion to another level, read on for more!

Recommended: Upcoming Game Consoles of 2013 – The Future of Gaming 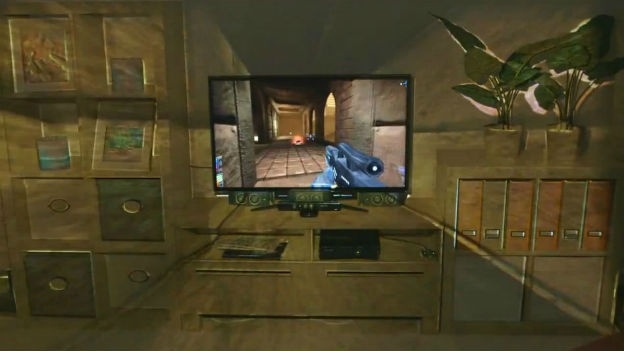 Microsoft IllumiRoom is a revolutionary new technology that will change the actual environment around players via a projection system. It will basically be able to extend player’s field of view or drape the room in an appropriate environment to the game being played. The best part? It can adapt to any configuration and it doesn’t matter what is around the television screen! That means that even your peripheral vision will be filled with something relevant to the game, or an extension of it.

All these effects aren’t going to be some pre-processed or preset animations, but will be rendered in real time corresponding to the game. While there are rumors of Microsoft IllumiRoom making it to the new Xbox, Microsoft has confirmed that it will only be showcased in the coming months. However, this could probably mean that it will be later added to the console, just like the Kinect was adding later in the life cycle. All these words might not be sufficient in properly describing IllumiRoom, so have a look at the attached video to know more about it. It looks like a potent weapon in the upcoming console wars and could just tilt it in Microsoft’s favor, provided it’s priced right and used correctly. Your thoughts about Microsoft IllumiRoom?