When Samsung launched its flagship mobile phones, the Samsung Galaxy S4 and Samsung Galaxy Note 3, a lot of attention was drawn to the “octa core” processor. But even though it was advertised as such, the processor on both these phones weren’t actually octa core, they were actually two quad core processors that ran independently depending on the power requirement. While Samsung has promised to release a software update that allows the quad core pair to work together, MediaTek, well known Chinese chip manufacturer has already unveiled the first true octa core mobile SoC. More details follow.

Built on a 28nm manufacturing process, the MediaTek MT6592 sports eight low power ARM Cortex A7 cores that can work together between a clock frequency of 1.7 GHz to 2 GHz, depending on how it’s configured. In case you’re wondering, the Cortex A7 cores used on this SoC are the same ones used on the Samsung Exynos Octa in the low powered mode. So theoretically, if Samsung can optimize its SoC for all 4 high and low powered cores to work together, it should provide better performance. 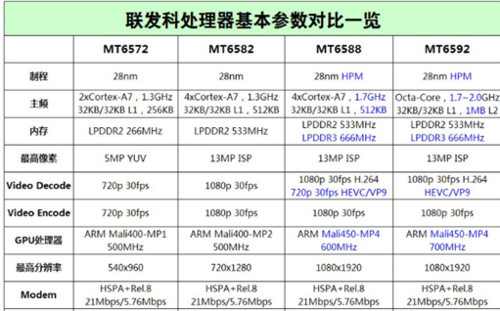 For now though, it seems that MediaTek has the upper hand. Benchmarks have revealed that the MediaTek MT6592 beats the Qualcomm Snapdragon 800 in performance, while consuming about 40% of the power it would. On the graphics side of things, there’s an ARM Mali-450 MP GPU clocked at 700 MHz that’s capable of full HD rendering as well as 4K UHD resolution video decoding and support for 16 MP camera sensors. But Qualcomm still has the upper hand in terms of networking because of an included 4G LTE modem. MediaTek still has to release its own LTE modem, and says it should be launched by the end of this year.

If this does work out, we should see the MT6592 with 4G in mobile phones by early to mid 2014, which is good news for prospective buyers. Considering MediaTek’s offerings are far cheaper than Qualcomm’s, you can expect Snapdragon 800 level performance in sub 350$ smartphones off contract. Some manufacturers are already set to launch phones using the MT6592 in the coming months, albeit without 4G. Cheaper and faster phones? Yes please!