On 6th July 2012, Nokia launched its budget Windows Phone 7.5 device in India at an affordable price of Rs. 12,999. But just for Rs. 2000 more, there’s the Nokia Lumia 710 for Rs. 14,999. So there are naturally comparisons of Nokia Lumia 710 vs Nokia Lumia 610. These two phones both come under the budget smartphone category, but even though they’re priced similarly and look similar, there’s a world of difference between them. First, let’s compare the technical specifications of the two phones here:

As seen above, the Nokia Lumia 610 is behind on almost every criteria except for standby and talktime. But then again, it’s no surprise with the lower tech specs. The body is pretty similar looking to the 710 and so are the materials. If there’s one thing Nokia can do well, it’s build solid, robust phones and the Nokia Lumia 610 doesn’t disappoint in that regard. Overall the phone looks simple, but at least it isn’t flimsy. Curiously, it’s heavier than the Lumia 710. While the body is pretty good, the same can’t be said of the screen. The size and resolution remains the same as the 710, but unfortunately the screen is less vibrant and is difficult to see in sunlight because it isn’t a ClearBlack screen. 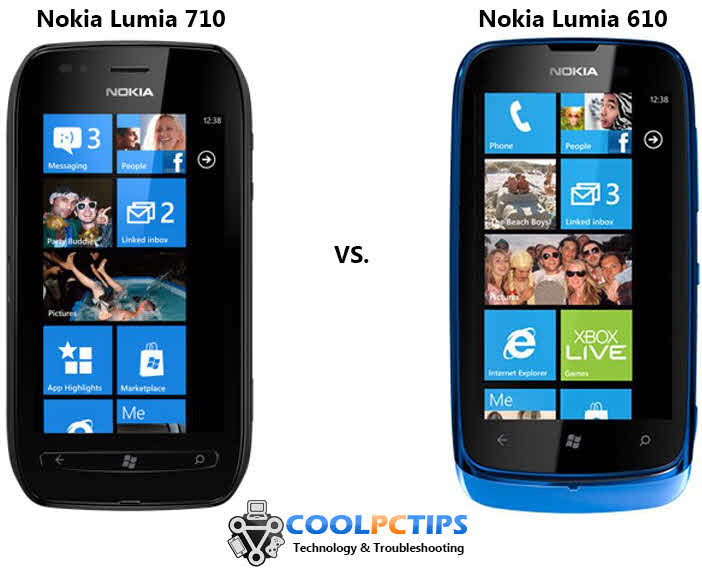 Windows Phone 7.5 is quite well known for running on lower specs very well, but Nokia Lumia 610 is almost the barest minimum and it shows in the performance. Basic menus are noticeably slower, apps and functions take longer to load and the camera takes almost 4 seconds to boot up. Speaking of the camera, while both the 710 and 610 have a 5MP camera, the 610 actually has rather worse picture quality. The 710 is capable of capturing 720P HD video (1280 x 720) while the 610 is capable of only standard definition 480P (640 x 480) video.

Now, the processor on the 610 is a lowly 800 MHz, so don’t expect blazing fast performance in any regard. Windows Phone 7.5 does a pretty good job of masking shortcomings of the hardware, but when compared to other smartphones, it’s not the best the fantastic Windows Phone 7.5 can offer. The RAM is also cut down to almost half, so that’s a serious loss of capability. By serious loss, we actually mean you might have to be content with not being able to run a few apps. That’s right, a few applications on the official app store won’t be able to run because of the memory limitation. They aren’t any less known apps either, if you choose to buy a Lumia 610, you won’t be able to run the hugely popular apps like Angry Birds, Pro Evolution Soccer 2012 or even Skype. Another point worth noting is that the Nokia Lumia 610 uses capacitive touch buttons on the front side like the Lumia 800 and unlike the Lumia 710.

In conclusion, if you’re really cash strapped, don’t particularly care about running a few apps, are perfectly happy with an inferior camera and slower performance and if battery life is all you’re looking for in a smartphone, go for the Nokia Lumia 610. We recommend saving up a little and getting the Nokia Lumia 710, it’s a far better phone and is basically a slightly scaled down Lumia 800 physically, but internally almost all specs are the same. For just Rs. 2000 more, we think Nokia has screwed up on the pricing just a bit.

Drop us a line and let us know what you think about Nokia Lumia 710 vs Nokia Lumia 610 and stay tuned to CoolPCTips!