Mobile phones with projectors are for the folks who love to show off their photos and videos to a large audience whenever and wherever they like. It’s not a substitute for a full size projector but will do for minor usage. Admittedly, it is an interesting combination, but in most of the cases customers have to compromise on nearly every aspect of the mobile phone just because there’s a projector built in. As in, the actual phone is quite basic, save for one of the 5 offerings listed here. Then again, just think of it as a portable projector with a phone instead of the other way round. Most of the phones listed here are from Indian companies, just one, a truly amazing phone is from a very well known international company. Want to find out? Read on to to find out the,

First up is the most basic phone to feature a projector, the Micromax X40. This rather drab looking phone comes with just the bare minimum of features like a music player, FM radio and a 2MP camera but is dual SIM. It runs on a basic Java based OS and supports hardly 4GB of expandable memory. The screen is a tiny 6 cm with 262K colors.  The Micromax X40 is priced at an extremely affordable Rs. 3099 and is one of the cheapest mobile phone with a projector. 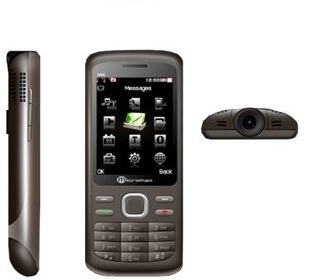 One of the lesser known companies, Vox also offers a mobile phone with a projector, the Vox Q8. This phone comes with an inferior 0.3MP camera, but with a larger 2.2 inch TFT LCD touchscreen, expandable memory upto 16GB, dual SIM and dual speakers. Other features are just about average and it’s not got much else to impress the techies. Vox does claim a standby time of over 200 hours though. The Vox Q8 is available for Rs. 5999. 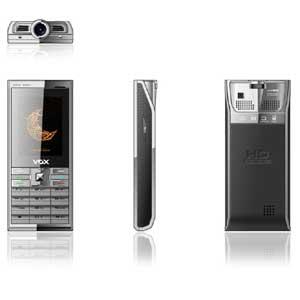 Probably the most advertised of the bunch, the Spice M-9000 Popkorn is somewhat of an upgrade from the Micromax X40. Most of the features are same including the screen size and resolution. However, the Spice M-9000 Popkorn has a better 3.2MP camera, expandable memory support upto 16GB and allows you to watch free-to-air analog TV channels as well! It’s quite good value for money at Rs. 3699. 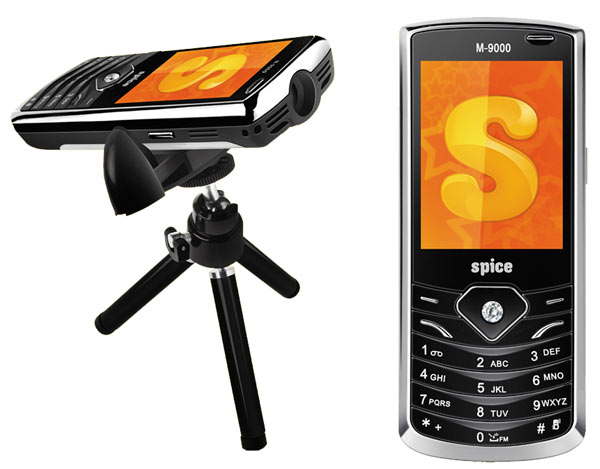 The Intex V8810 V.Show is a device that actually packs some punch. It features 3.2 inch TFT LCD touchscreen, dual SIM support, 2 micro SD expansion slots (each supports upto 16GB) and a projector that can display images/videos at upto 36 inches across diagonally. Intex has also included 2 cameras, the rear facing is 2MP and the front facing is 0.3MP.  It’s probably the best Indian mobile phone with a projector out there, although that’s not saying much. The Intex V8810 V.Show will set you back by Rs. 8800. 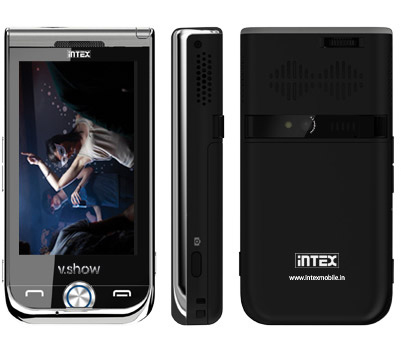 Just recently announced, the successor to 2010’s Galaxy Beam i8520 is the Galaxy Beam i8530. This is the only smartphone with a projector, and not just any projector, a Texas Instruments DLP projector! The DLP (Digital Light Processing) projector is the same technology used in movie projectors. Galaxy Beam i8530’s projector is capable of displaying images/videos at a size of 50 inches diagonally at nHD resolution (640 x 360) with a 15 Lumens rating. Apart from the great projector, it’s a high end smartphone as well! It features a dual core 1GhZ ARM Cortex A8 processor, a 4 inch capacitive touchscreen, dual cameras (5MP with LED flash and 1.3MP), upto 32GB expandable memory and runs on Android 2.3 Gingerbread which is upgradeable to Android 4.0 Ice Cream Sandwich Operating system. Curiously, Samsung’s official site lists the RAM as “6GB. It might be a typo, but we’ll know after it sees widespread release. Expected price is around Rs. 35000. Though this phone doesn’t come under our under budget list, but is one of the most amazing projector phone ever made. Galaxy beam schutzfolie. 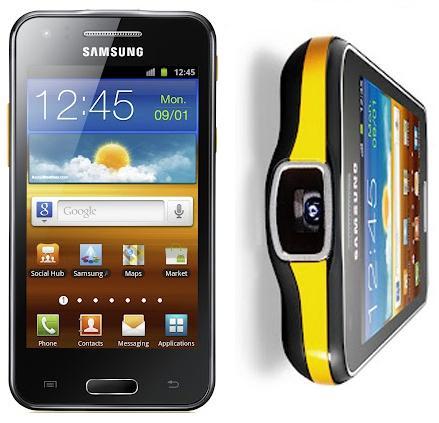 These were the Top 5 mobile phones with projectors, are they going to see widespread use or will they remain a gimmick? Let us know what you think!

Read more about the 5 best smartphones under 15000 for Diwali.