The Aakash 2 tablet was just launched last month in India and it was met with better reviews than the first Aakash/Ubislate tablet. Most consumers and students haven’t even received their Aakash tablets yet and there’s news of a successor. It’s not concrete as of now, but some of the proposed Aakash 3 specs and features have been detailed by some researchers and development heads at IIT Mumbai. With their targets set at much higher than Aakash 2, the makers of Aakash 3 are planning on not only better specs, but better apps and much higher production numbers. Here’s what we know. 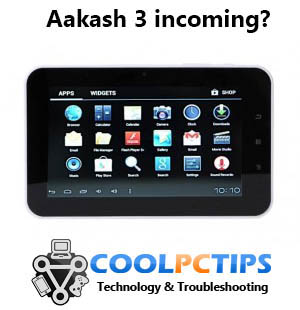 First and foremost, the Aakash 3 specs and features will be be improved by upgrading the hardware. A more powerful, and possibly multi core procesor, more RAM and more inbuilt storage is what’s on the list. Also, the makers of Aakash 3 aim to make the tablet powerful enough to run both Android as well as Linux, which is good news for those interested in software development. Of course, it is said to pack in Android Jelly Bean as well.

Another change we might see is that there could be two versions of the Aakash 3 tablet, one for schools and one for colleges and higher education institutions. Price is another concern here, but apparently even with all these features, Aakash 3 is set to be priced similarly. It remains to be seen if DataWind can deliver on their promises for the current version, Aakash 2, so thinking about Aakash 3 could just be overkill. As of now these are just very basic outlines for the next version of the Aakash tablet, but even then we’d rather that DataWind concentrates on clearing backlogs and delivering Aakash 2 to their customers. Drop us a line telling us what you think about Aakash 3, is it way too early to think about it now?