Move over Samsung Galaxy S4, there’s a new superphone in town! Sony’s just announced smartphone, the Xperia Z Ultra is big on both size and power. The Xperia Z Ultra will be the first phone sold globally that comes with the ultra powerful Qualcomm Snapdragon 800 chip. And it’s also big, like really big. Pushing tablet dimensions in fact. The Xperia Z Ultra is the first device by Sony that is ahead of the curve in terms of hardware, and will really appeal to spec junkies. Here’s what you need to know about the new behemoth from Sony!

As mentioned above, the Sony Xperia Z Ultra will pack in a Snapdragon 800 SoC, with a quad core processor clocked at a blistering 2.2 GHz. If reference benchmarks are anything to go by, it leaves even the Exynos 5 Octa in the dust. The Xperia Z Ultra was leaked quite a few times earlier but was still a surprise launch. Speaking of which, the Xperia Z Ultra can hardly be called a phone, it’s absolutely huge. If you thought the Galaxy Note 2 was big, think again. It might be slightly ridiculous holding a device of this size to your ear, but it’s nevertheless being termed as a phone. 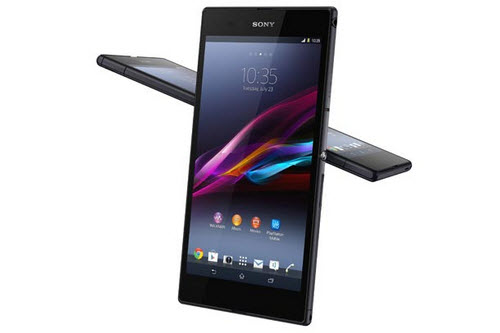 Apart from the huge screen and powerful internals, the Xperia Z Ultra features some great camera tech as well. Since a lot of the new flagship phones are coming with 13MP cameras it might be a surprise that Sony has chosen to go with an 8MP shooter. However, it comes with a lot of the technology featured in full fledged cameras like Exmos-R. Even the screen borrows some features from its LED TV lineup. It’s safe to say that Sony has gone all out on this particular device, and here’s the complete specsheet:

All these impressive internals are built into a surprisingly slender frame that is only 6.5 mm thick! For reference, the iPhone 5 is 7.6 mm thick. However, it’s not light, tipping the scales at 212 gms. The best part is that it’s not a fragile device. The Xperia Ultra Z is both dust and water resistant upto a certain extent, and the screen is nigh scratchproof. In fact, Sony says that almost anything can be used as a stylus, including a regular pen or pencil. So, power, check; durability, check; good looks, check.

The only thing that might hold the Sony Xperia Z Ultra back is the unruly size. In all other ways the Xperia Ultra Z looks like a mighty fine device, so it looks like Samsung and HTC have got a fight on their hands. It’s set to release sometime during Q3 2013 globally but no price had been mentioned yet. Sony has certainly got a head start over the Galaxy Note 3 and One Max, so game on Samsung and HTC. Do let us know your thoughts on this monster in the comments below!