Smartphones have become necessities these days. It’s no wonder that every manufacturer are releasing devices by the dozen and there’s a smartphone model for almost every price point. However, all the choices also confuse the buyer and often devices priced similarly are not always comparable, thus we give you a smartphone buyers guide. Before buying a smartphone there’s a few things you need to keep in mind so that you get the best deal. So here’s the things to know before buying a smartphone:

Smartphone Buyers Guide – Everything You Need To Know 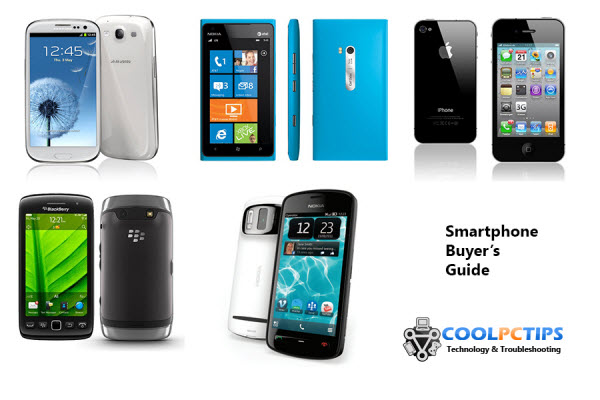 As chronicled earlier, there are a lot of choices when it comes to operating systems. However only one of those has a truly large amount of devices, that is of course Android. The other options are Windows Phone 7.5, iOS, BlackBerry OS 7 and last but not the least, Symbian.

As of now Android is the most popular smartphone OS and the latest version is Android 4.0 Ice Cream Sandwich with Android 4.1 Jelly Bean announced just a few weeks earlier. The advantage of going Android is the options for customizations and flavors. Lots of manufacturers use their own UI over the Android base. It’s also the OS that supports true multi-tasking and is very adaptable. There are phones for almost all budgets, but not all of them are great. Try to get a phone that runs Android 4.0 Ice Cream Sandwich or at least one that can be upgraded to it. Not all phones can be upgraded, so try to get one that can be upgraded to stay up to date. If it’s out of your budget, get one that runs Android 2.3 Gingerbread at least.

Windows Phone 7.5 is the newest kid on the block but it’s not less capable by any means. It has the most attractive interface, is the easiest to use and offers integration with a lot of Microsoft services. Another plus point is that most Windows Phone 7.5 devices are on the inexpensive side. Although as of now they remain behind the loop in terms of hardware, Windows Phone 7.5 compensates by being able to run great on  low specs as well. 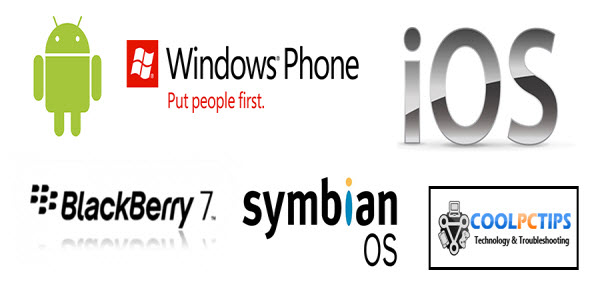 iOS is Apple’s proprietary OS that can be found only in a handful of devices and only in 3 smartphones as of now.  If  you’re a fan of Apple’s slick interface, its app store and integration with Apple’s services then go ahead and get yourself an iPhone. But the iPhone 5 is just around the corner and it would be wise to wait. Furthermore, the latest iOS 6 currently can run only on iPhone 3GS, 4 and 4S, so that’s limited choice. Also, Apple devices are rather expensive, so be ready to shell out some extra moolah for the iPhone.

BlackBerry OS 7 is also a proprietary OS that runs only on the namesake BlackBerry devices. There are a fair bit of phones running it, but most of them are business oriented and come in a specific price range. Most of the devices don’t have inspired designs either and you’d be losing out on a fair bit of applications which the BB OS doesn’t support. The communication services and business capabilities of BB OS devices are still among the best though, and it is still the smartphone of choice in corporate environments.

Symbian isn’t very popular when it comes to smartphones, but the few phones that do run it are from Nokia and still pack a punch. It’s pretty much the most underrated smartphone platform, but once you start using it you’ll find there’s hardly anything it can’t do. Coupled with Nokia’s signature usability, battery life and support, Symbian Anna and Belle based smartphones might make you a bit of a hipster, but then again, they also get the job done!

Unfortunately, most smartphones look pretty much the same. It’s a large slate with most of the area covered with a screen. In terms of form factor there isn’t much difference, but there’s still size, weight and looks that you can choose from. Most people do prefer slim, compact phones and most smartphones do fit the bill. However, the Samsung Galaxy Note, Samsung Galaxy S3, Motorola DROID series and such are rather large and some people might be turned off by the size. This is quite a subjective criteria and there’s nothing much we can suggest. Just keep in mind to get a smartphone with a robust body that doesn’t seem flimsy and won’t break apart if dropped. A tip of the hat to the Motorola DROID RAZR which is Kevlar enforced and is pretty much the smartphone with the strongest body.

Needless to say, the screen is one of the most important factors in deciding a smartphone. There’s a few things to keep in mind here. First of all is of course size, everyone prefers a large screen. A 3.5 inch or larger screen is preferable, and anything over 5 inches might not be pocket friendly (we’re looking at you, Samsung Galaxy Note!). But then again, there’s no point in having a large screen with a bad resolution. Try to get a phone that sports at least 800 x 480 resolution. The most preferable, if they come under budget of course, are HD (1280 x 720) and qHD (960 x 540) screens. The clear winner here is the Apple iPhone 4S which packs a crisp, clear screen. Even though it’s 3.5 inches, it is very sharp because it has a high resolution (640 x 960). This is what Apple has termed “Retina Display”. Due to the high amount of pixels on the screen, the pixels are not discernible, it has a high pixel density of 326ppi (pixels per inch). Bottom line is, get a large display with a good resolution and pixel density for a great viewing experience. 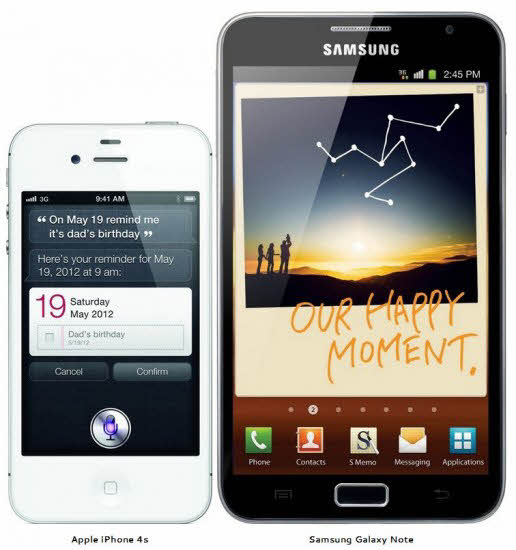 Now, there are basically 2 types of screens, LCD and LED. Different phones use different screens and both types have their strengths. For example, the iPhone 4S, HTC One X use Super LCD screens with IPS and the Samsung Galaxy S3 uses a AMOLED screen. All those phones have great displays but differ slightly in color reproduction, contrasts and the like. There’s no clear winner as such. But when buying a phone, make sure that the screen is visible from different angles and can be actually used in sunlight. There’s no point not being able to use your phone in the daylight, is there?

Ah, the heart and soul of any computing device, the processor and RAM. A good processor and enough RAM will dictate the performance of the phone. Of course it also depends on the OS, and coding efficiency also matters. Currently, high end smartphones come with quad core processors clocked at 1.2 GHz and above. The processors ruling the roost are the Qualcomm Scorpion and ARM Cortex A9. They usually come on something called a SoC (system on chip) and include both CPU and GPU as a pair. As a rule of thumb, try to get a phone that has at least a dual core processor clocked at 1 GHz. The latest and greatest SoC’s as of now are Nvidia Tegra 3, Samsung Exynos Quad and Qualcomm Snapdragon S4. A Tegra 2, Snapdragon S2 or S3 would be good buys too.

With all the things smartphones can do these days, more RAM is a necessity. Therefore, 512 MB RAM is almost a minimum. High end smartphones come with 1 GB RAM or even 2 GB. This is one of those things it’s no harm having more of, so give a preference to phones with 512 MB RAM or more.

Most self respecting smartphones come with 5 MP cameras and some even come with 16 MP cameras. The only exception is the totally awesome Nokia PureView 808 which houses a behemoth 41 MP camera. Needless to say, even phones with the same MP cameras differ in quality so snap a few photos and check if color reproduction, low light photography and the like are satisfactory. Now, there are a few phones that have the same MP cameras but have different video recording capabilities. Examples are the Nokia Lumia 610 and Nokia Lumia 710 which we’ve compared here. The 710 can record 720P HD video while the 610 can record only 480P SD video. So check out whether the phone has HD video recording capability and if it can record full HD 1080P video then you’re golden!

Having the most powerful hardware and such sure give you bragging rights, but there’s no point if the battery is drained within a couple of hours is there? Generally, if the smartphone is on high speed 3G or 4G networks the battery is drained faster. Also, Windows Phone 7.5 devices tend to be more frugal so the OS matters too. But of course, a larger battery is generally what you’re looking for. On an average, you should be able to go a day without charging on light usage and 7-9 hours with heavy usage. The absolute king here is the Motorola DROID RAZR MAXX which comes with a gigantic 3300 mAH battery that allows about 20 hours of talktime without being bulky! The Samsung Galaxy S2, HTC One S & V and iPhone 4S last around 8-9 hours and are quite efficient too. 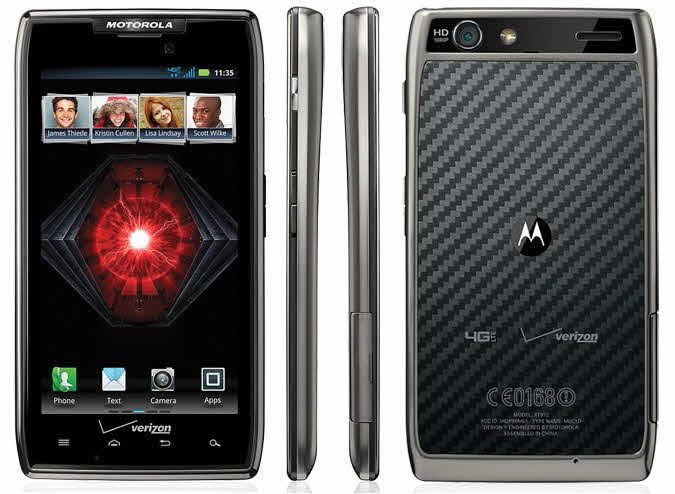 The biggest criteria of course, is price. It all depends on your budget and the best you can get for your hard earned money. If you’re on a budget, you might have to compromise on a few factors, but by classifying smartphones based on the above criteria you at least have an idea of what you can get. In conclusion, just have a clear goal set in mind and decide which features or capabilities you require more than the others and compare them with the nearest competition price-wise to find out which is the best buy.

Please leave us your comments and queries on the smartphone buyers guide below!